On October 28, Mnet held its 2014 Style Icon Awards. What are the Style Icon Awards? Well, I have no idea. A mix between awards and performances, it appears to be some sort of cultural affair meant to honor fashion icons.

But a place that brings in fashion icons

Onto one fantastic stage

The festival now sparkles in front of the entire world

But, does it really? Not particularly.

Performers embodied the “style” concept. There was a lot of walking around and posing like on a runway. This was of course a bit awkward for certain performers. WINNER of course had no problem since that was their debut concept. Luckily, the CL and Soyou collaboration stages also managed to avoid these boring parts. The hip-hop performances alongside the 10Soul Designers x Korea’s Next Top Model fashion show was good – and HaHa & Skull did elicit some cheers. Too bad the other artists didn’t fare as well.

Understandably, SIA is not a gayo daejeon nor is it MAMA. There shouldn’t be any expectation of rabid fangirls screaming their lungs out during performances.  However, it hardly seems like a “fantastic stage.” Getting any sort of reaction from the audience during performances seemed like pulling teeth. CL and Diplo had a pretty excitement-worthy stage, and yet, nothing. You could even see the frustration on Diplo’s face when he failed to get more than a small cheer from the spectators. Add in the seemingly subpar sound system (at least in the live video), and the whole performance aspect fell flat for SIA.

SIA appears to be more of a classy affair, which isn’t surprising if you view it as a fashion show. The entire stage set up is like a runway, with its plain white walls, floors, and seats. However, these white surfaces should have given rise to some wonderful projections but just seemed uninspired (with the exception of Soyou’s Mad Clown and Junggigo collaboration stage). There are also extended moments of awkward presenters talking and videos of how the nominees exude certain traits, like 4Minute being a hot issue or Yoo Yeon Seok representing youth.

Juxtaposed against this stark formality, there were short comedic interludes, featuring various variety shows, asking “what is a style icon?” (I don’t think anybody knows.)

SIA appears to be more about rewarding the current trendy idol or actor, rather than those that have any influence on fashion and style. Granted, I don’t have a finger on the pulse point of what fashion is in style and who people are emulating in Korea. Perhaps the winners are becoming icons who the general public takes their cues from.

The awards do recognize an iconic designer, so we know that fashion has something to do with it (Steve J & Yoni P were this year’s winners). Also, I can understand After School’s Nana winning an award (the Tony Moly K-Beauty); her star power has risen, and as she is an idol-model, she’s in demand for pictorials and endorsements. The same goes for Kim Soo Hyun, who has pretty much taken the continent by storm.

As for the other top 10 nominees for Style Icon of the Year, I’m not sure what the criterion is behind their selection. Most are up-and-coming popular stars. Except for Jo In Sung, who won Style Icon of the Year because either he’s hot or because…well, most likely because of his face and single status. I have to give Jo In Sung credit: he shucked the “runway concept” and practically jogged on stage to receive his award. 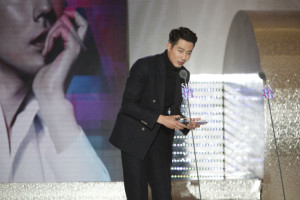 But, when you look at Mnet’s call to public voting, the question is asked which 10 of 50 motivated people the most. What does “motivate” even mean? Do these people move people’s style or just their hearts?

The only portion of the selection criteria that even makes a bit of sense in regards to SIA are the votes from experts within the various fields of style and research on public preferences. If this factors in who is rewarded with the most fashion endorsements, increase in sales for brands, and have more of a presence in the world of style and fashion, then it would be a good benchmark and make the awards valid.

However, from what is being presented during the award show, such as having Korea’s Next Top Model contestants strut their stuff, and showing particular designers, there’s a clear emphasis on fashion. So why aren’t more models/designers or those idols and actors who are movers-and-shakers in the fashion world gaining the awards, such as G-Dragon winning last year?

Otherwise, it just feels like more boring, back-patting of actors and idols who are gaining fame. This is especially true when they preannounce the winners. Don’t we already have enough of those types of awards?