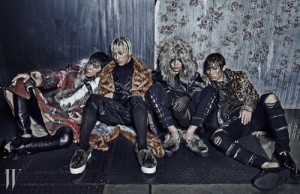 The last week in K-pop was one of the most eventful yet in terms of K-pop comebacks and K-drama debuts (not scandals, thank goodness). It was one of the hardest weeks ever to pick 5 things recently. There did seem to have a recurring theme to the past week though, one of second chances, which is what helped pave the way for this edition of 5 Things.

The following are my picks for the top 5 things that happened in K-pop last week. If you are not up-to-date with your K-pop and don’t tend to appreciate spoilers, turn back now or forever hold your peace.

5. A Second Chance at Victory–Roommates in the lotus field

While the women’s special of Yoo Jae-suk‘s talk show I Am A Man with guests BEAST was definitely worth watching, nothing quite cracked me up in K-variety land as much as Roommate last week. Other than a bunch of celebrity friends visiting the house, Joon, Sunny, Jackson and Ryohei took a ride to the countryside to go harvest lotus leaves and roots. It was quite funny as all the guys are definitely city folk and had to get used to the malodorous ponds that the lotus grew in with plenty of leeches and loaches residing alongside it. Here’s a clip of the group playing a game in which the JYP nation gets a second chance and still doesn’t quite pull off the victory.

4. A Second Chance at Love–Phone in Love

I’m a bit behind in my K-pop, so I had no idea that quirky K-pop Star 3 duo Almeng got signed by YNB Entertainment, home of BESTie, back in August. Almeng started promotions for their debut mini album this past weekend with performance of their title song “Phone in Love.” Their mini album compoSing of Love was released on October 21st along with the MV for “Phone in Love.”  It’s interesting to see how they fare with their debut as they will go head to head with K-pop Star 3 winner Bernard Park. They were awesome on K-pop Star 3, hopefully they have a bright future ahead of them–they’re definitely off to a good start.

3. A Second Chance for your Dreams–Tomorrow’s Best Dramas

The load of new dramas that started last week was a significant and enjoyable mix with: tvN‘s Misaeng starring Im Si-wan, Kang So-ra and Kang Han-eul based on a popular Korean web comic, SBS‘ Modern Farmer starring Lee Hong-ki, Honey Lee and Park Min-woo about a failed rock band deciding to take up cabbage farming, and MBC‘s Rosy Lovers starring Lee Jang-woo and Secret‘s Han Sun-hwa about young college students learning the highs and lows of love and 4teen, MBC‘s latest in their Drama Festival series of short one or two episode shows, which stars Cha Tae-hyun and Chun Bo-geun, as his younger self, on the cusp of adulthood trying to survive middle school with his friends.

My pick for best of the bunch though is KBS‘s Tomorrow’s Cantabile, the K-drama take on the super popular manga based Japanese dorama Nodame Cantabile. The drama stars Joo Won as the OCD musical genius Cha Yoo-jin and Shim Eun-kyung as the slightly off balanced pianist Seol Nae-il. The K-drama version doesn’t quite handle the manga craziness as well as the original J-dorama, the transitions from normal to nuts definitely leave the audience with a bit of a whiplash, but the drama is cute and zany fun from the get-go, and the casting is pretty much perfect. It’s guaranteed to bring back out the orch-dork (or band geek) in us all.  Joo Won’s hair though…

2. A Second Chance for Understanding?–Calling out Haters

There were a bunch of comebacks by K-pop veterans including DGNA, Seo In-young featuring Zion T, VIXX and Gaeko, but it was Epik High that made an epik comeback with the pre-release of the song “Born Hater” featuring Beenzino, Verbal Jint, Winner‘s Mino, iKON‘s B.I. and Bobby. DJ Tukutz‘s beats are so, so good, and the lyrics from all the rappers lay it down, calling out all those that have criticized them in the past.

I’m still watching and (mostly) loving some of my ongoing favorite dramas like The Three Musketeers, High School:Love On andMy Lovely Girl, although at times it’s hard with the many holes in some of the story lines. One of the newer K-dramas that I’ve been watching is Bad Guys,a gritty, hard-hitting crime thriller starring Kim Sang-joong, Ma Dong-seok, Park Hae-jin and Jo Dong-hyeok.

Kim Sang-joon plays a veteran cop who does almost anything to get the criminal, even though it may not always be quite legal. With the approval of higher-ups, he puts together a team of hardened criminals/murderers to catch some of the worst serial criminals in South Korea that the cops can’t catch themselves. The story points to more going on than meets the eye. It is fast paced and at time quite gross — I’ve had to watch through my fingers more than once — but the show has been worth watching, even behind covered eyes. The drama airs every Saturday on OCN, and the good news is that English subtitles are available, but the bad news is that they usually come out a week later.

Those were my picks for the top 5 Things that happened in K-pop last week — were they yours?