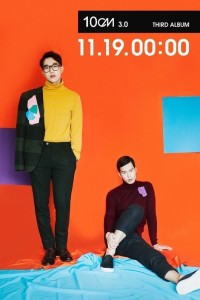 In continuation with their previous two full length albums 1.0 and 2.0, acoustic duo 10cm are coming back (and keeping count) with their third album 3.0 on November 19!

It’s been nearly two years since 10cm’s last musical offering, The 2nd EP, was released, and some changes have occurred. The duo, consisting of vocalist Kwon Jung-yeol and guitarist Yoon Chul-yeon, have since left their original record label Nega Network. 3.0 will be the group’s first album released under new agency Magic Strawberry Sound, which has reassured fans that “this will be an album that sounds more like 10cm than ever.”

The teaser photos released show a sleeker, model-esque concept as the pair poses in clean-cut styling against color blocked and monochrome backdrops.

10cm had previously held two-day “teaser concert” in August to showcase the upcoming album’s new songs. Reportedly, the track that elicited the best response from concert attendees will be promoted as the lead single of 3.0. Following its release, 10cm will commemorate the new album as well the as holiday season with a series of concerts beginning on Christmas Eve.

Two years is a long break for any group, and only a little more time will tell how 10cm has grown along with their signature folky sound. What about you, readers — excited or not?