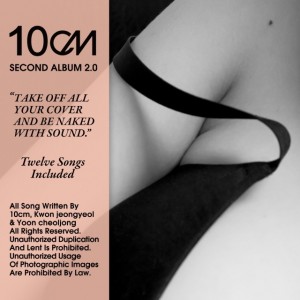 Although active in the music scene through OSTs and festivals, 10cm hasn’t released any albums since February 2011, when their first full-length album came out.

Comprised of singer and jembe player Kwon Jung-yeol and guitarist Yoon Chul-yeon, 10cm comes back with a second album riddled with new influences that go from the Latin rhythms of the tango and the bossa nova, to an 80s vibe. After the hype surrounding their debut and especially the release of their hit “Americano”, 10cm already proved their credibility as a band, which would then lead to their first album. But how have they evolved? Does their second album live up to expectations?

The album opens with “You And I”, pretty reminiscent of their previous works. 10cm represents the triumph of simplicity and “You And I” is once such example. Made up of Chul-yeon’s guitar sounds and Jung-yeol’s voice work, the song manages to create a really intense chorus with just two words and a falsetto.

“Fine Thank You And You?” is a light-hearted 60s-inspired song; very Beatle-esque and with a hint of nostalgia, the tune conveys the good feeling of meeting a past love and realizing both lives have followed different paths. The song possesses the equilibrium of melancholy with just a few strands of heavy emotions, which expresses that awkward moment between youth and adulthood.

I’m fine thank you thank you and you
I can’t believe we used to be in love long ago, it’s so funny

Tango-inspired “The Farewell Of The Han River” is one of the strongest tracks of the album. With the song’s lyrics and Jung-yeol’s vocal tone, the tango rhythm is able to reflect a very passionate and melancholic feeling. The accompaniment is a very typical tango accordion, but 10cm wisely dodge a gimmicky outcome by incorporating their own style. The couple of English sentences scattered across the lyrics don’t feel like the usual K-pop random words; they are statements that round off the heart-tugging lyrics rather well.

Jung-yeol’s transition into the falsetto is smooth and natural, and the song is peppered with lovely details, like that one cymbal that sounds exactly when the chorus climaxes.

Also full of Latin influences, “Smelly Girl” opens with a bossa nova base and Chul-yeon’s much lower singing voice — and who, by the way, has a very bossa nova-esque voice, almost whispery à la João Gilberto — and then smoothly transforms into a much more folk-sounding chorus. “Smelly Girl” almost feels like two songs in one, with each of the duo delivering their own part, but the bridge flows so good the track works fantastically well overall. The guitar solo has an elegant Spanish sound and merges well with the rest of the song. 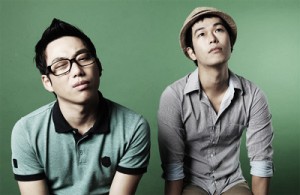 “Tonight” has a very 70s/80s sound to it, which seems to be the thing in K-indie lately (not that I’m complaining). As I mentioned before, Jung-yeol pulls off the typical 70s falsetto just right, and “Tonight” has a naughty vibe so typically 10cm, yet less playful and more classy than older stuff like “Kingstar”. And if the MOGEF has previously banned some of their past songs like “Americano” for unclear reasons, 10cm definitely don’t mind — at least with “Tonight” there will be nothing unclear about the ban:

On this lonely night, this deserted night
There’s not a single woman who will play with me
In the creaking motel rooms
Everybody fuck tonight

The next track, slow-paced “So…”, seems to reference quite a lot of their past work. It has a similar progression to “Good Night”, from their first EP, and although that’s not bad per se, it does make it sound a bit flat when compared with other tracks of the album. The guitar is barely there, so Jung-yeol’s voice is the main pillar; he sounds as good when singing in a lower key, though more intimate and coy than when he hits his higher registers. I’m still trying to decide whether I prefer his voice when it’s barely a whisper in “So…”, or when it’s raw and aggressive like in “The Farewell Of The Han River”.

“Mind” has a livelier flow and very pleasant additional instrumentation. Right after, “Now.Here.Stop” is an atypical non-acoustic track; they introduce the electric guitar for a more pop-rock sound instead of the usual folk. In fact, the song progression rather reminds me of fellow K-indie band Nell, which is everything but negative. I love how the song flows nicely until its climax around the 2:30 mark, and then slowly fades away. It feels natural, and it also very fitting with the lyrics that open with a “Today I stop here.”

Finally “Corona”, pretty much like “So…”, sounds like a track that could be included in some of their previous albums. To put it bluntly, “Corona” isn’t exactly new. 10cm included it for the first time in this second album, but they have actually been performing it live since 2010. Their most slow-paced tracks always have a very lullaby-esque aura (or is it because I always compare them with “Good Night”?), and probably because they are simple and intimate, they work especially well live.

10cm adds a handful of new influences to their sound while keeping the strong points that characterized their past works — soulful lyrics, endearing vocals and a smooth sound. They are evolving the right way, so I can only praise this second release and wait patiently for future projects. Because the album doesn’t have any major flaws — apart from a few songs sounding too much like some of their past works — my overall rating for the album is 4.8 out of 5.

What do you think about 10cm’s second album, Seoulmates? Share your opinions below!