Following her last comeback “Singing Got Better”, Ailee comes back with another break-up song, albeit one that features a decidedly greater amount of loud self-empowerment and girl power. Where the former was a slow and nostalgic ballad, mini-album Magazine‘s title track “Don’t Touch Me” swings totally in the other direction, with the lyrics and attitude coming across as defiant and diva-like. 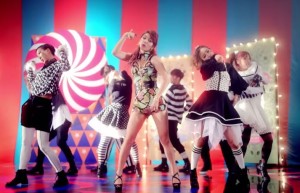 Song-wise, this is very notably an Ailee track, with the R&B roots mashed with an overlay of jazzy beats. Her constant supply of vocal gymnastics and ad-libs cement it once again as a song that only Ailee will be able to pull off.

While listeners may tire of her blatant oversinging to show off her vocal prowess, in this day and age of mediocre singing, I say: bring it on. Her confidence and flourishes inject this track with a soul and funk feel, and the beat is reasonably infectious and mind-numbing.

The rhythmic clapping of the snare and tambourine underlay Ailee’s voice wonderfully, and it results in a very addictive listen supported by the repetition of ‘clap’ in the background. One of my favourite things about Ailee’s tracks is that the background instrumental never ever overpowers her lovely voice. We’ve all seen our fair share of lesser vocalists fall prey to being overwhelmed by the synths and beats, but this has never been the case with Ailee. Even in the lower range, Ailee still pulls off the notes with a reverberative quality that impresses to no end; I’m convinced that there isn’t a single note that’s out of Ailee’s range. 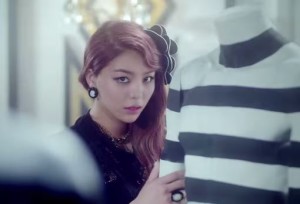 For a breakup song, this release ventures more optimistic than others, and puts the girl in the dominant position. Instead of grieving over the memories, the girl instead tells the guy to stop pestering her, and encapsulates the message perfectly with a sassy “I’m out” at the end. As some fans have mentioned, this song can be interpreted as a middle finger to her ex-boyfriend who leaked her nude photos in November 2013. Whether this is the case or not, her girl power attitude is one of the few that stand out noticeably.

For such a powerful song, the accompanying MV is rather bland and simple, and is somewhat of a let-down. The only thing going for it is the visual delight presented by the many colourful sets and outfits. Staying true to the jazzy feel of the song, most of the sets tend towards retro, especially with the black-and-white mime image repeated in quite a few scenes. But even with such a simple layout, Ailee maintains her diva image, thanks to the help of the fan to sustain her thousand scenes of hair flips and hair billowing behind her. 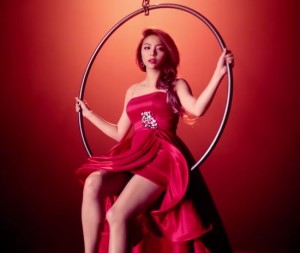 In any case, Ailee has always been the epitome of substance over style, talent over show, and music over visuals. Even though her 22-pound weight loss was the most talked-about issue before her comeback, “Don’t Touch Me” reminds all of us that to her, music and singing is still her top priority.

Even though this release sounds similar to some of her previous singles and doesn’t exactly carve any new ground for Ailee, consistent impressive performance counts for something. Her mindblowing vocal abilities and decent dancing skills is acknowledged by almost all, and her expertise at pulling off vocal dance tracks is still a considerably rare sight in K-pop. So even if the MV is nothing to write home about, “Don’t Touch Me”, as a song, is still a satisfactory addition to Ailee’s discography.