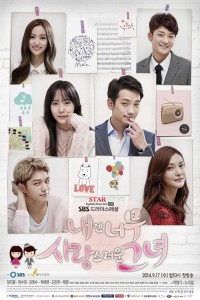 I don’t think any drama has gotten so much hate for its casting, weeks before the drama even hit the small screens. Idol-actors castings are usually unfavourably received, and considering that three-quarters of the main cast are idols, My Lovable Girl (or She’s so Lovable) probably received three times the normal amounts of downvotes right from the start.

And to a certain extent, the critical reaction is not unwarranted. The subpar acting is something to cringe at, and it doesn’t help that the script is terribly cheesy and one-dimensional. Some dialogues are goosebump-inducing, and romantic music chimes in at certain scenes to attempt to drill into my mind the non-existent chemistry between the lead couple.

But for those who are able to sit through the bad acting and clichéd script for the love of your biases, I think the latest episode laid a decent premise for Lovable to build a story on. The emphasis on the ANA’s power struggle is really quite lame, because you have thirty-something mature adults acting like spoilt high-schoolers. So tolerating even that, what got me cautiously hopeful is the underdog story that we have in Si-woo (Infinite’s L) and Se-na (f(x)’s Krystal). 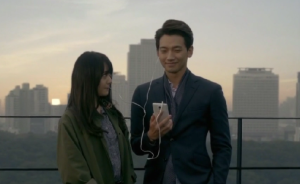 Dramas revolving around the entertainment circle are often hit-or-miss. It’s a side of the glamorous life that we as consumers don’t realize, and it provides a fascinating perspective of the hidden dirty laundry. However, such series (not all) often fall into the trap of typecasting everyone as high-maintenance and bitchy with one talented but struggling heroine. Honestly, it gets trying to watch after a while.

And since Se-na fulfills the quota of the gifted songwriter who’s just trying to find a break, Si-woo’s unique circumstance makes him my favourite character so far. While he’s definitely on top in terms of the popularity game and has technically ‘made it,’ we see that he’s actually an outcast in his own group. And to add salt to the wound, his group decides to abandon him and jump ship to another company. Wait a minute — is this a drama or a documentary? I swear I’ve read similar-sounding news before…

It’s quite funny how L is actually playing himself as the visual, who is infamous for only boasting good looks but has little substance, of the hilariously yet aptly named Infinite Power (or Woollim Power). It hits a little close to home for him, although playing himself was supposed to make his acting come across more convincing. His character is one of the better written ones and has already proven to pull our heartstrings. Despite his widespread popularity, he avoids the obnoxious route and acknowledges that fame doesn’t buy anything, not even friends. And despite his antagonistic group mates, he’s not one bit malicious toward them and has always just desired for peace with them. Even at the height of his success, he recognizes his shortcomings and dedicates himself to training even harder. Now, isn’t he a great character to rally behind? 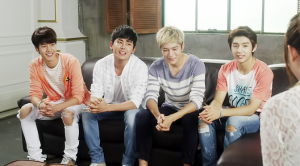 And I’m not saying this out of bias for L, but his underdog climb from someone who only relied on his face to a solo artist worthy of attention is a journey that I would be 100% invested in. And that his key to this success might lie in Se-na’s genius song additionally ties into their fate with each other. Now that the stage is set for Si-woo’s solo debut against his ex-teammates’ comeback, that’s a drama I wouldn’t mind watching.

Unfortunately, the drama seems to have decided that the nuances of corporate life in an entertainment company are more interesting than the cutthroat and lonely life of idoldom. Hence, we get a lot of scenes with the CEO Hyun-wook (Rain), with his familial problems and his petty rivalry with his fellow producer, none of which are exceptionally fresh or exciting.

Most of the other characters are rather typical, especially with Hyun-wook’s psychological trauma and Se-na’s negative bank account. Relationships-wise, the chemistry between the lead couple is a little weird. Hyun-wook’s obsession with her is slightly misleading since he merely sees her sister in her. But Se-na finds herself unknowingly falling for this daddy-long-legs ahjusshi’s kindness. I assumed the drama would push for a loveline between these two, but right now I find her grudging friendship with Si-woo much cuter and his reliance on her as his only listening ear quite endearing. 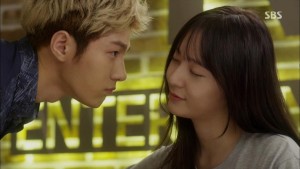 Ratings-wise, the numbers have been dropping with every episode. Not exactly surprising, since I only expect fans of the cast to actually tune into this rather messy show. Frankly, the setting of the show in an entertainment company does have quite a bit of potential, which is unfortunately not fulfilled by focusing mainly on the mundane. I’m not here to watch power struggles or secret affairs, just bring on the music, the scandals and the PR craziness.

While the cast is not great at acting, they’re still tolerable and have been showing signs of improvement episode-by-episode. The fact that they are playing rather simple characters allows them to compromise partially on their ability to convey any emotional depth. So technically, all they really need is to act out the script naturally, which is proving tougher due to the rather cringe-worthy lines and unrealistic circumstances.

Despite all this, my love for L knows no bounds, and I will still be tuning in every week. Anyone else joining me?