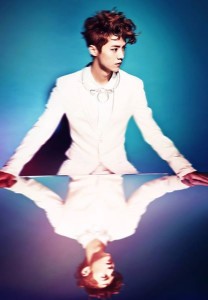 According to news sources, EXO‘s deer, Luhan, has requested termination of his contract. Luhan will be joining Kris as the second EXO member to leave this year. He has been absent from their concerts due to his severely bad health, and it seems he’s had enough. Speculation had been circulating since last month that Luhan would ask to leave. Guess the speculation was correct.

Seoul Central District Court reported that the suit was filed on October 10th. He will be represented by the law firm, Hankyul — who also represented Kris and Hangeng in their separation from SM Entertainment.

We can be ready to see a lot of backlash — and perhaps some character assassination — as a result of the news. Stock prices are already falling. This is just another shot SM Entertainment is taking this year, and it should be interesting to see what else happens before the end of 2014. We’ll probably get a comeback soon from one of their artists or a relationship announcement. It will also be interesting to see what happens to EXO’s Chinese market influence as EXO-M’s size continues to diminish.

In the meantime, good luck to Luhan in the future. Hopefully, his health will improve and he will continue to see success in whatever endeavors he pursues.