That Which We Call A Rose: TaeTiSeo's "Holler" 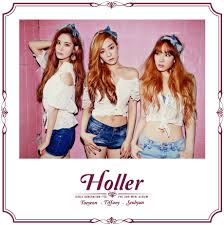 Girl’s Generation has faced issues with their subgroup since the idea for TTS was first conceived. Some Sones disagreed with the members selected, some believed that Taeyeon, Tiffany, and Seohyun were the only talented vocalists and the others were useless, others said that supporting TTS was a betrayal.

The reaction to the news that TTS was getting a comeback, following the accusations that “Mr.Mr.” was “TTS and their backup dancers,” did not go over well. Clearly, the trio needed a solid comeback. And on that count, Holler gets a pass. But perhaps an addendum was needed: a solid comeback with mostly original music. Because on that scale? Big fat “F”.

“Holler” is a really lackluster track. “Twinkle” was a song with personality and and spark and sparkle and oopmh. Not so much here. It’s really generic sounding, with the whole thing feeling more like album filler than a title track. Which makes sense, considering it’s a remake of Mizrock‘s B-side “Hello”. What is shocking is how much like “Hello” “Holler” sounds. Keeping the melody the same is a given, but most of the vocals are identical too. There’s no showboating, no belting, no high or held notes. TTS is supposed to be a vocals-oriented unit, and “Holler” just doesn’t back that concept.

“Adrenaline” is a fun bouncy song that’s really hard to stop dancing to. TTS sound a lot more awake here than on “Holler”, which backs my perception of good pop as a viable caffeine replacement. “Adrenaline” is very stylized, with obvious autotune — albeit for effect rather than pitch correction–, and an upbeat frothy sugar-pop sound. It’s much more in line with the europop of five or six years ago, which fits, because it’s a remake of “Adrenaline” by the Velvet Angels. “Adrenaline”, as fun as it is, sounds childish and has a disconnect between the chorus and verses. However, they also harmonize fabulously, and play with picking up and dropping out of lines for a whirlwind effect. It’s definitely one of Holler‘s gems. 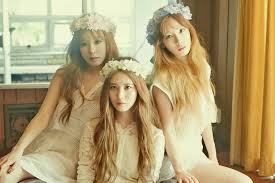 Third on the EP is “Whisper” which is actually an original song. And that is the only completely positive thing I have to say about it. As a whole, “Whisper” reminds of a really good background song, or high-quality hold music. It’s not lacking in quality, it’s just not a song ready for the big leagues. The lyrics are generic, the vocals are generic, the melody is generic. Nothing is bad, it’s just really, really meh.

“Stay” is the final original song on Holler, and is in the same vein as “Adrenaline”. It’s charming, upbeat silly love song. This is what goes through your mind when you’re in love. Let the day last forever, may this happy time never end. And praise Jesus, “Stay” showboats. Taeyeon, Tiffany, and Seohyun reach for notes, travel up and down scales, and belt some lovely adlibs. This is why TTS exists. Sadly, Tiffany’s rapping makes an appearance here. SM, do not let any member of Girls’ Generation rap. They cannot do it, and every time they do, it takes a year off the life of whoever hears it.

“Only U” is clearly meant to be the “Baby Steps” of Holler. Like “Baby Steps” it’s a pretty, delicate piano number paired with powerful, soulful yet quiet singing. Also like “Baby Steps”, it’s a remake. The original is called “Breathe You Out” by Charice, who is tragically best known in the West as Glee‘s Sunshine Corazon. And like “Baby Steps”, “Only U” spanks the original. Taeyeon, Tiffany, and Seohyun sound hopeless in love, terrified of getting hurt, but unable and unwilling to stop their fall. It’s simply breathtaking, and by far the best song Holler has on offer.

Unfortunately, the last track on Holler is the worst. “EYES” is a blatant rip-off of Ariana Grande‘s “Problem”, and do not even try to say otherwise. The opening riff is a synth variation on the famous horn section; the sudden whisper before the chorus, the one-line chorus, the riff-drop, are all from “Problem”, aka The Biggest Goddamn Hit of 2014. It is not possible to do that without intending too. Really, it’s not even that it’s a rip-off that really pisses me off– it’s that “EYES” is a knockoff. Everything about it is a lower-quality imitation of a really good song. The only improvement is that TTS can actually enunciate, but that is not enough to make up for horn removal. Don’t take the horns out of pop music. MORE horns, not less. 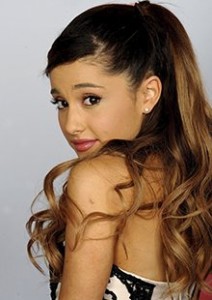 It’s not that I hold to the idea that remakes or covers are bad. Honestly, I really like good covers. I prefer the Glee covers of “Teenage Dream” to the original, and I hate Glee with the fire of a thousand suns. It’s that there should be limits on how much a company relies on them, and they should be limited to covers or remakes that the artists sound good covering.

TTS is, as a whole, not great with covers. When they sing “Holler”, “EYES” or “Adrenaline”, they’re on par with the originals. But a good cover should make it impossible to believe that they are not the originators, and while they can with some of their songs, they can’t with all. And that’s a bit of a problem. “Baby Steps” got a pass because it’s amazing. The same cannot be said for most of Holler.

Holler is an EP defined not by its songs, but what its songs are. Two-thirds of this mini are remakes or ripoffs, and even though those songs are mostly good, it leaves a bad taste in my mouth. SM is so shameless and unapologetic about it, it’s infuriating. The original songs–even “Adrenaline”, whose originators are ungoogleable but probably Swedish — were found in about 12 hours.

As someone who really liked Twinkle, it’s kind of offensive to get handed something that’s mostly other people’s work and be told “Yeah, we bought or stole most of this. Suck it.” But that doesn’t stop Holler from being a solid EP with good replay value and quality pop. SM might not make good music, but, clearly they can buy it.