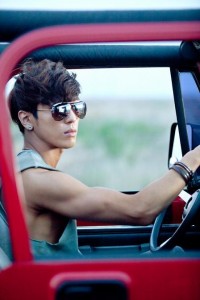 In March earlier this year, FNC wrote on their official homepage that there were plans for Yonghwa, leader of CN Blue, to release a solo album in the latter half of the year. Since then, there has been no updates, until Yonghwa re-confirmed the news at his first solo fanmeeting in Japan a few days ago.

In additional to his self-produced solo album, he also mentioned plans for a solo concert, and a possible world tour to come along with it. This is evidently great news for fans, as FNC has traversed beyond the boundaries of Asia before for world tours.

Considering that Yonghwa is the leader, the lead singer, composer and the most visible member of CN Blue, it seems a rather natural choice for him to be the first to go solo. It will essentially be switching out the other CN Blue members for another band.

Something to look forward to is that Yonghwa will be producing this album with his own hand. We’ve already gotten a hint of his incredible talent with the band’s recent Can’t Stop album, so I definitely can’t wait to see what else he has up his sleeve. It will also be interesting to see if his own personal colour will be a distinct change from CN Blue’s style, considering that he has started to dictate CN Blue’s musical direction to a certain extent as well.

Anyone else excited for his solo debut? What are you most looking forward to?