Music & Lyrics: Orange Caramel and My Sushi are Dada! 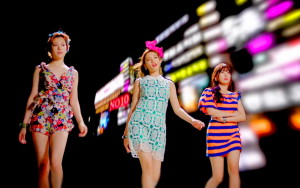 What is Orange Caramel’s success mantra?

No matter how much one thinks about it, it is nearly impossible to pin down the core reason for Orange Caramel’s success. However, there is an abstract ‘something’ oiling their smooth running sub-unit career. Their music is nothing ground-breaking; their choreography is restricted to simple moves, and their fashion often garish. The general consensus is that OC is concept-oriented but honestly, what in the world is OC’s concept?

They are not Kyary Pamyu Pamyu’s postmodernist weird yet nor are they VIXX’s gothic weird. They are bizarre yet not-so-bizarre. They are quintessentially K-pop yet radically deviate from contemporary K-pop so much so that they feel like a parody of K-pop. Given the plethora of means of executing a parody, OC has had to choose their tools of parody cleverly and it seems they have gone for two major modernist art movements – Surrealism and Dadaism.

Defining the movements in some key points is futile because they arose in a certain socio-political atmosphere responding to the modern man’s spiritual crisis. Now the movements have been appropriated and re-appropriated to fit the postmodernist worldview. A traditional implementation of surrealism and Dadaism would be T.O.P’s “Doom Dada” however OC, unlike the former’s mechanical understanding, constantly negotiates between the two ideologically and stylistically.

Of course, now if one goes back to “Magic Girl,” then my theory sounds completely superficial but the ‘OC style,’ if one could say that, emerged with “Lipstick.” Despite that one can still find traces of surrealism and Dadaism in their previous releases.

When the sexy members of Afterschool donned pink puffy dresses and huge bows in “Magic Girl” it created an odd disjunction between their images.  While no one was deeply affected by the transition, there was a certain degree of shock that the total makeover induced. The more interesting thing was of course that both the images – maturity and infancy – existed simultaneously with the latter seeming to be purposely contrived. With its element of shock and paradox prevalent in the text and context, OC began their Dadaistic journey. 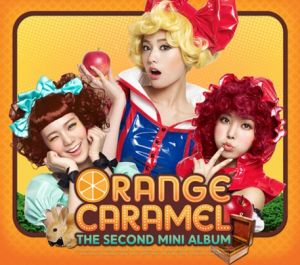 “Aing” is the perfect example of OC’s proto-surrealist, proto-Dadaist venture: it has all the key characteristics sans the finesse and negotiation developed in their later releases. Breakdown of language and communication is a major element in both the movements and the very title of the track – Aing – signifies nothing. Aing is no proper word in any language, it does not hold a specific meaning but it still fits perfectly into the song. In addition, the title has no relation whatsoever to the content of the song.

This breakdown of the signifier and the signified tangentially attacking the arbitrariness of K-pop MV titles draws a direct connection with the surrealist painting “The Treachery of Images” by René Magritte on which were written the lines “This is not a pipe” in French under the image of a pipe. “Aing” accomplishes that and more since the lyrics don’t match with the visual representation.

The MV mashes various fairytales into its narrative completely changing the roles of the protagonists. Snow White rides a broom, Red Riding Hood bites into the apple, and most importantly, Red Riding Hood is portrayed as a personal hero for the child. This creates chaos and fragmentation not only on the visual level but also on the narratorial level. Fairytales, which are often trusted narratives, are ripped apart, and their pieces randomly put together by OC all the while with a sweet smile on their faces. Surrealism invests itself in such bizarre representations and free associations. The line “An alarm goes off in my tear duct” is textbook surrealism as the textual, visual and performative is in a state of free play.

“Shanghai Romance” and “Lipstick” belong to the transitional phase of OC. Their videos have a ridiculous storyline, and their excessive make-up and bizarrely unique outfits show a complete disregard for traditional aesthetic pleasure and formal beauty. This should of course resonate with our sentiments on any K-pop group – ridiculous storyline, over-the-top visuals except they project themselves to be otherwise.

It’s with “Catallena” and “My Copycat” that OC finally comes to an agreement with their Dadaist and Surrealist inclinations. It is interesting to note that in both these MVs OC uses Dadaist methods to achieve a surrealist reality.

Dadaism comes from “Da Da Da” which is basically baby talk. So when Tristan Tzara says, “God and my toothbrush are Dada” he is conflating God with his toothbrush but equates them to baby talk rendering both of them meaningless and useless. This led to the rise of nonsense language where the modern man speaks nothing but an incoherent rambling of “Da Da Da.”

OC does the same in “Catallena” except quite consciously. Not even in our wildest dreams could we consider “Catallena” a song about immature and choosy people being likeable despite their flaws.

There is already a paradox and a breakdown of language in place which gets intensified by the lines:

This line, like baby talk, does not make any sense in the video. The line is talking about shoes, the girls seem to be talking about sushi but the song is actually about choosy people – total breakdown and absolute irrationality. But it still makes sense simply because it sells itself as nonsense. We enjoy the nonsense because it attempts to be nonsense. The video propagates a love for the insanities of a world-gone-mad and we take part in it simply because all of us enjoy the celebration of the irrational, the insane, and the nonsensical because it is the finest form of escapism, something Surrealism has been accused of since its inception.

Dadaists see excessive rationalism as part of man’s downfall. They absolutely loathe universal meanings and revel in chaos, conflict and multiplicity, which is pretty much “Catallena” in a nutshell because none of us can say with total confidence that this is the meaning of “Catallena.” Are the girls sushi? Are they mermaids? Are they customers? Are they even representative?

This multiplicity of meanings and roles that OC adopts in the MV can also refer to human psyche in flux. Dadaists and Surrealists often delved into psychoanalysis and strongly advocated that omnipotence of dreams. They tried to represent the same in their art by either juxtaposing contradictory objects to create jarring harmony or by playing around with shapes, sizes and numbers. 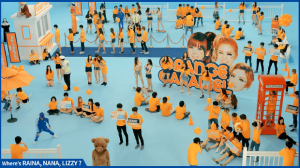 The latter leads me to OC’s recent release “My Copycat.” The Dadaist preoccupation with playful and humorous content is visible in the interactive video. Claiming that there can be no normative aesthetic experience, no final truth, the ‘Where’s Waldo? /Spot the Difference’ concept complicates meaning making. Simply put in the two pictures shown by OC in various frames which picture acts as the image of reference, the ‘correct’ image based on which we find the ‘differences’?

In the same way, finding the ‘real’ OC among the mass of similarly dressed people questions the existence of a singular reality and also questions the existence of facts. Just because I tell you X is a woman, wears orange clothes and has brown hair does not guarantee your finding X because in a crowd, and world at large, we mostly work by elimination. Y and Z don’t have brown hair so X must be this one. We criticize an MV by saying it lacked in certain areas but inversely, OC is defined by the existence of others’ lacks. The lack of creativity, imagination, madness, fun in other K-pop MVs is compensated for in OC’s MVs by taking the lack to satiric heights, to surreal levels.

While trasngressive Dadaists elements are present in it, it ultimately aims for restorative surrealism which is why while it looks weird, it does not scream weird like Kyary Pamyu Pamyu because at the end of the day it wishes to work within the system while subverting it. It is not quite anti-art – anti-K-pop in this case – like Dadaism but it does want to overturn traditional bourgeoisie notions of art – traditional notions of K-pop such as boxed MVs – like Surrealism.

Orange Caramel is all fun and entertainment but it also provides enough space for analysis like this. In addition, it also provides subversive forms of femininities, stands as a fertile example of understanding the sudden trend of repetitious music, and drags our attention to the importance of costumes and accessories in K-pop simply because it doesn’t conform to traditional systems and obfuscates aural and visual reality. The existence of such a space of various symbolic interpretations without demeaning the literal could just be the hidden secret to Orange Caramel’s success.