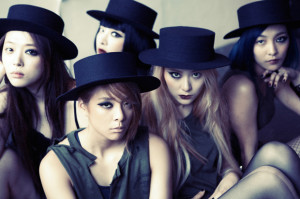 Let’s face it: two years is a helluva long time in K-pop. Images take one-eighties. Groups graduate from “rookie” to “nugu”, or even win a music show. A boy band can debut, swell to enormous popularity, develop psychotic sasaeng fans, and eventually have one member flee like it’s a house on fire. Luckily for f(x), all that’s happened is solidification of their sound and the doubling of their discography. Therefore, Seoulbeats presents an update of our original f(x) b-side. After all, twice as many songs means twice as many hidden gems, right?

While f(x) had flirted with the quirky electronica sound for years, Pink Tape defined it as their sound. It was present on every track, even on songs where it didn’t seem like it would work. They also proved that music, even electronica, could cover a wide range of styles, from hip-hop to pop rock to a smidge of horrorcore. All are awaiting aural appreciation, so let’s get started.

“Pretty Girl” is a slower hip-hop jam, complete with random guys cheering in the background. It’s an aural mood that theoretically shouldn’t mesh with sopranos, electronic twinkling and a glockenspiel. And yet it does. It has flaws, mostly in that the whole song is very basic, it’s very awkward to dance to, and Amber’s raps are — well, she’s improved. Ish. The lyrics more than makes up for it, though. “Pretty Girl” is a reminder that looks are not everything, and if that’s all you develop, you’re destined to end up as a man’s accessory. f(x)’s point is that a girl with personality can become pretty, but pulling the reverse is a lot harder. Remember ladies: beauty AND brains.

This is “Signal.” It’s disco. Not disco inspired, not has some similarities, it’s pure, unadulterated disco. Funky bass line? Check. Silly love lyrics? Yep. Weird disco trills? Got ’em. In fact, the  rap breakdown is the only thing that convinces me that this is not a remake of some tragically obscure 70’s remnant. Everything is just so wonderfully circa 1977. That undeniably dance-y beat. The Donna Summer belting. The titular signal being radio and not wi-fi. The real tragedy is “Signal” would have been ten times better as the title song than “Rum Pum Pum Pum”. Especially if the disco concept was carried into the choreo, costuming and lighting. It has catchiness, dance-iness, and the earworm-iness that led disco to the top the first time.

“Ending Page” is, appropriately, Pink Tape‘s last song. The rock/electronica fusion is strong, yet filled with pain. In terms of emotional performance, “Ending Page” is f(x)’s best song. The nuances of facing the end of a relationship are brilliant. Strong, tired of the facade, lonely, yet still afraid to turn the page and admit it’s over. The instrumentals are no joke either. Guitar, piano, strings, possibly some secretive woodwinds, all woven together with an incredible synth line; not to mention changes in bpm and structure that don’t sound disconnected. Producers Artisans Music crafted a masterpiece. Honor their work and love “Ending Page”.

Had disco managed to claw its way through 1982 and into the world of EDM, the result would be a lot of music like “All Night.” It has the same smoothness and funky bass line, but a much more modern sound. There are subtleties and layers that no one had time for the first time around. For instance, there are violins hidden in the background, barely discernible, but they add depth to this homage to a shallow genre. “All Night” can get a bit repetitive at times, but instead of feeling lazy, it puts me in mind of techno gods Daft Punk. Simple and repetitive, yes, but if it wasn’t, you’d never catch the little things. Thank god SM had the good sense to use “All Night” as one of f(x)’s other promotional songs.

There are songs for every imaginable purpose under the sun. “Vacance” is a song whose purpose is to get your butt under the sun. This is an ode to “Imma hit the beach today, who’s in?” And in a workaholic culture like Korea’s, it’s needed. Sometimes, you just need to grab your buddies, pile in the car and chill. People need to take a break sometimes in order to maintain sanity. The appropriately mid-tempo number urges it’s listeners to be adventurous while they still can. Travel, flirt, whatever. Just enjoy your freedom while you can.

Take note, Twihards of the world: these are vampires. Not sparkling emo boys, but bloodthirsty monsters that want you dead, and when you see them, don’t squeal. Run. All jokes aside, “Dracula” is a standout on Red Light, as, like “Signal”, it dives headfirst into its concept. The sounds of storm and rain form the base for the song as a whole. The instrumental sounds someone converted “Dark, Abandoned Alley” into music. There’s the creepy warning, and of course, that scream of terror. The lyrics just kill, though, as it’s one of the cleverest metaphors in music. The Dracula Bram Stoker wrote about preyed on women, using his mystery, charm, and all-around sexiness to draw them to him like moths to a flame. And then he killed them. Here, Dracula represents bad boys. Yes, they’re sexy, charming, and rather devil-may-care. But this is real life, not a romance novel. They cannot be saved by the love of a good woman. They, like Dracula, will suck your life away until you’re nothing but a husk. f(x) is trying to warn it’s fans away from these destructive romances. They’re not worth it.

Pink Tape and Red Light have give f(x) the chance to solidify their position as the quirky techno girl group. But with both albums, there were some magnificent gems hidden in the background. They’ve shown that a sound crafted from electronica doesn’t mean that all their songs have to sound the same, and that variety is the spice of music. Any b-sides you think we missed? Tell us, readers!