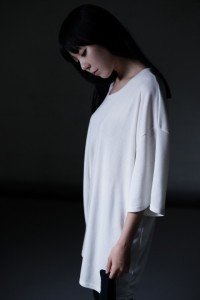 Every once in a while there’s a voice that manages to mesmerize and entice, a voice that doesn’t rely on the largeness of range to hypnotize, but rather gives a sense of calm and reassurance in its notes and natural prettiness. Taru is one such artist. She magnifies her simple vocals to a height that allows the listener to feel safe, protected. She sweeps in with a wistful reminder of our long forgotten ability to seek out the beautiful things in life. Taru’s sprite-like gift has enchanted listeners since 2008, especially with the release of her self-titled album in 2009, a piece of music that’s both versatile and very simply constructed.

Taru’s voice is itself a revelation — something that’s pretty enough to make an impact on mainstream K-pop, but raw enough with just enough nuance to stand alone and give the genre, in all its permutations, depth and unpolished beauty.

Her first forays into music—debut album R.A.I.N.B.O.W. and EPs Lovely Pink and Chronos Wing— showcase the former aspect of her vocal versatility. The sound on these albums seemed to be geared toward a wider variety of listeners, erring on the side of fluffy cotton candy pop. However, it wasn’t exactly singular enough to garner any attention away from the pop starlets of the day, which in 2008, the year of her debut, was one overshadowed by a lot of fervor from groups like DBSK and their much anticipated comeback album Mirotic, as well as Big Bang, HyunA and Lee Hyori.

Her 2009 album Taru gave us a greater peek into the scope of her vocal range and her ability to mold her vocals to fit any construction. While still palatable for any audience, there’s a decidedly less commercial feel—being more acoustic than polished production. The softness of her tone is never overpowered by the music, rather music and vocalist creating a perfect marriage of power and beauty that elevates each song to a new level of ethereal grandeur.

Taru’s self-explorations revealed a great deal of emotional depth and a stark realization that she needed to search deep within herself for something more than just a means of expression. She figured out the why and how of this need to express, going further to reveal her soul and her desire to purge the sorrow, happiness, confusion, and love of life each human being experiences. She released singles and EPs for the few years following her self-titled album, working with labels KT Music and Pastel Music, including single “Mr. Destiny.”

With this new discovery of emotional depth, she began to release music that panned towards the melancholy and reflective — that which unapologetically showed the truest sides of her, raw and unfiltered. She wanted to be able to connect with the people who chanced a listen to her work, reaching out to them to let them know that in the grand scheme of life, the great ephemera in which we all exist but for a moment, she was a ledge to grasp onto. Album 100 Percent Reality was just that — an intimate peek into a reality that we’ve all lived but very few of us have been able to put concrete thought and image behind.

Taru’s music began to take on the shape of the human condition — a figurative and even concrete visualization of the experiences that we as human beings continue to suffer and live through. She became a more honest, rawer version of those same listeners who would walk through life without expressing the natural emotions and urges to feel that drive us to continue through life — after all, if life makes you numb, you search for ways to feel. Taru took a chance with her music, possibly ostracizing her from those fans who’d known her in her more commercial first steps.

But what she gained was an audience ready to listen to something that would take them away from the humdrum of their lives and the excesses part-in-parcel to attempting to escape the tedium. She was an elixir for those prone to turning to something liquid harsh to quiet their sadness.

That’s not to imply that her work was all depressing metaphor and sips of sadness meant to quench the thirst left behind by harrowing heartache. With 2012’s Blah Blah, released on Sony Music, she managed to express the lightness of life, the silliness of living. Thus Taru has become an honest look at the human condition. Nothing is ever too silly or even too heartbreaking; it’s all just the right amount of human to remind us of who we are.

Her desire to continue to dig through the trenches of true humanity led to album Blind. It’s an emotive, evocative musical experience, being at once grand and implicitly simple. Much of the album is acoustically driven, with the guitar providing the perfect blank canvas to allow Taru to express herself without competing with the composition. It’s an album that’s very much alive, if not heartbreaking. Single “Rainy” opens the album with all the emotive frankness and emotional depth Taru’s ever mustered to that point, and the album continues in that vein. It’s the perfect vehicle to highlight her pristine and clear vocals as well as her raw emotional self.

With her latest single “Enough,” Taru continues to dig deeper into herself to release music that’s as honest as she can fathom. It’s energetic, lively, an expression of life that is as pure as walking down the street or taking a sip of morning coffee.

She’s professed that she doesn’t want to become a legend in the industry. Rather, Taru has much humbler goals set for herself. She’s said that her main goal is to be able to relate to her listeners and fans, having expressed a desire to “become a friend to my listeners; a musician who they can cry with and lend a shoulder to my listeners.” Her humility and ability to reach in to the deepest emotions of her listeners ensures she will continue to cultivate a relationship with fans and those new to her pretty, unfettered voice.