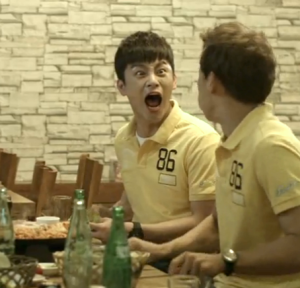 We’re halfway through the drama and while Min-seok’s secret is somewhat safe, his heart hasn’t been as lucky. These four episodes featured a roller coaster of emotions for all our characters while still doling out the comedy, albeit in smaller doses. Since the focus of these episodes were emotions, let’s take a look at everyone’s feelings broken down into the Good, the Bad, and the Zany.

While I still stand by my complaints about Soo-young and Yoo-ah, High School King has at least given Soo-young a little more to do. She does well as Min-seok’s secretary, even managing to save the day in episode six; Soo-young seems more suited for this position than her last.

Soo-young also shines in her scenes with Yoo-ah. In fact, the girls are the best when they’re together. They are completely convincing as siblings and manage to display their affection for one another, even while bickering.

I also liked the show’s contrast between Jin-woo and Min-seok’s courting. Jin-woo was mature and suave while Min-seok’s childish antics showed a drastic disparity. Their different approaches to Soo-young highlight their different personalities and, especially in the case of Jin-woo, let us know a little more about their characters.

Unfortunately for our couple, I’m going to have to place their kisses under the bad. Not because they were physically bad — Seo In-guk made the second kiss believable and natural — but because of the misleading age difference. A ten year age difference isn’t terrible in the grand scheme of things, but when one of the parties is still in high school, it is. 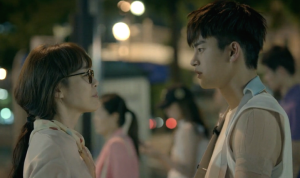 And this is in no way Soo-youngs fault — the blame lies solely with Min-seok. He is lying by omission to her and due to that, I can’t get behind this couple. Imagine how she will feel when she finds out that the guy she kissed was actually a high school boy?

You can argue all you want about him being mature for his age — as we’ve seen, he is not even that mature — but that doesn’t take away from the fact that it is deceptive and wrong.

On the hand, it’s hard to support a Soo-young and Jin-woo ship for the way he used her. At first, I was suspicious but during episode seven, it seemed as if he truly began to have feelings for her. His aloof facade began to slip away and for the first time, we saw him smile and enjoy the company of another person. They could have been well matched too, with Jin-woo teaching her to stand up for herself and Soo-young teaching him to let his guard down and be loved.

But unfortunately, he allowed his rivalry with Min-seok to get in the way. His actions were despicable towards Soo-young and it was a milestone for her that she chastised him for his bad treatment of her. Yes, he has a sad back story, but that doesn’t justify his using her for her connection to Min-seok.

Lastly for this section is President Yoo Jae-gook’s (Han Jin-hee) recognition of Min-seok’s father. Does every single person in drama-world have to be connected? 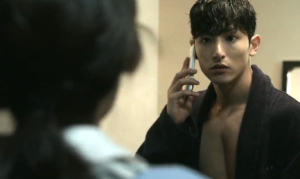 I’m just hesitant on this plot point because I don’t want it to be something that cheapens the plot. For example, Min-seok being the secret heir to a company or his dead father leaving behind a ton of money. High School King has done well enough without overusing such cliches and I hope it won’t start now.

With Min-seok brooding over his feelings and not offering the same workplace comedy as before, the comic relief has turned to his two best friends, Oh Tae-suk (Lee Tae-hwan) and Jo Deok-hwan (Kang Ki-young). The two are hilarious together and their bumbling antics are endearing. Surprisingly, they are also the voice of reason when they point out how Min-seok’s deception could ruin his relationship with Soo-young.

Although Min-seok isn’t as comical as before, he still got in a few scenes, with his backseat fight with Jin-woo being the most outstanding. Seo In-guk captures teenage mannerisms perfectly and brings humor while doing so.

Lee Soo-hyuk also got a chance to show some physical comedy as he hopped around on one foot after losing his shoe to dog poop. Having not watched Vampire Idol, I’ve only seen Soo-hyuk in serious roles and it is great to see him show smiles and attempt comedy.

Overall, High School King has remained interesting by further exploring some characters and putting others in emotional turmoil. It deftly weaves in comedy around the plot while still managing to ground the characters in reality. And although I’m not excited about Soo-young and Min-seok’s budding relationship, I believe the show will handle it appropriately and make it a worthwhile watch.

Are you team Min-seok or team Jin-woo?