JYJ's Comeback Is Upon Us! We've Got the Teasers to Prove It!

Gird your loins, lads and ladies. K-pop’s Prodigal Sons are in full-fledged teaser mode, and the pictures do not disappoint! Over the past few days we’ve seen teaser pictures from JYJ‘s latest magazine spread with Marie Claire Korea, three teaser pictures for their latest album, an album title, and… a teaser pic… for the teaser video of their comeback single “Back Seat.”

The long-awaited comeback is titled Just Us. After four years of fans desperately waiting for a follow-up to the critical and commercial success of In Heaven, we’re finally getting gifted an album with a track list of thirteen songs all written by the men (with offerings from songwriters from the States), and whose title left a few fans scratching their heads. It’s a somewhat bold step, making a statement in its simplicity. The men themselves released explained personal meaning behind the album title:

JYJ’s album is titled ‘JUST US’ because we don’t feel the burden that we must look handsome and cool. Instead, we simply want to show our natural state. It’s true that this is music that only JYJ can create, but we were very happy while creating this music and we want to share this happiness with the public.

The photos certainly give that impression–black and white closeups of their faces, nothing flashy or immediately impressive. Literally, it’s just them, and that’s the way we like it. The thirteen-song track list for Just Us was released earlier today, and the titles (including songs like “Dear J,” “Dad, You There?,” and “30”) imply a very personal touch to each and every one. As if that weren’t enough to get fans in a lather, just a short while ago, the teaser picture for their upcoming single “Back Seat” was released as well as a description of the song:

“Back Seat” is an urban R&B track with sexy lyrics and a fantasy mood. It has the charismatic feel that was not presented in previous albums. 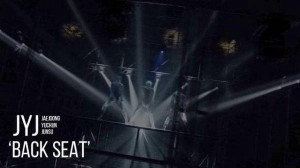 The teaser image gives me early ’90s, “Rhythm Nation” feelings–an industrial background with spotlights casting them in shadow. Very reminiscent of music videos from that era. You know the ones: the viewer is virtually sitting front row at a concert complete with dramatic lighting, leather costumes, and a dark stage. And with the sexy feel of the song, I’d go so far as to say there’s a bit of an R. Kelly “Bump n’ Grind” theme happening. But, of course, we won’t know that until the official teaser for the song comes out on the 22nd.

Along with the revelation of the album title and the release of the teaser pic for their single, fans were also treated with teaser pictures from their latest magazine spread. These guys sure know how to make a comeback! JYJ’s sophomore effort Just Us and lead single “Back Seat” will be released on the 29th. The album is also available for pre-order. Prepare yourselves!