JYJ Offers a Simple and Mature Come Back with "Just Us"

After waiting nearly three years for the follow-up to In Heaven, the men of JYJ return with their third and final full-length album before it’s off to fulfill their military duties. Just Us is meant to be an album highlighting their matured style and musical outlook. Man, oh man, do these guys know how to make a comeback.

The interlude is most certainly the most beautiful JYJ have ever conceived. While in the past solo and group intros were usually more dance focused or esoteric in that “pop star trying to be deep” sort of way, “Just Us” sets the stage brilliantly for the album’s concept. Simple music beautifully composed, their voices proclaiming independence from any expectations besides their own—Junsu and Jaejoong whispering, “Just us,” while Yoochun utters the group name.

The intro segues perfectly into the smoothness of lead single “Back Seat,” a sexy R&B-laced track that is about… just exactly what you think it’s about. The men of JYJ are pulling no punches. What you see on this album is what you get. Yoochun begins with an introductory proclamation in English, “All right, girl. Don’t be afraid. I’ma put you on my backseat.” The music is flirtatious, making use of a common R&B construction. The production team of Kim Tae-wan, Dong Ne-hyung, and Won Yeong-heon created a song that makes an impact with lyrics that get straight to the down and dirty: “Softly, with your arms, wrap them around my waist. Sweetly, with your lips, whisper in my ear. Don’t be shy, all right girl. Wanna touch your body all night.”

When the steam from the backseat romp fades and the fogged-up windows clear, we’re left with bitterness. “Letting Go” speaks of a lover losing interest. Well, our hapless protagonist has decided he’s not going to play the role of the sad and jilted lover. He’s taking matters into his own hands: “Your lips are saying that you don’t feel the same anymore. You spit out cold words, asking me to let go of you. Yes, now it’s over, since you say it’s over. Instead of being sad, I’m mad.” Penned by Junsu and Daryl “D Brown” Oldham, with a rap written by Yoochun, this love lost song is a rare breed. Instead of being down on bended knee, our protagonist decides he’ll be just fine without her: “Your life was nothing special. But it was made new like a beautiful poem. But you committed a sin against me, who was your world. You gotta do is what you go gotta do. So fuck off.”

Of course, given Jaejoong and Junsu’s solo efforts, it’s only natural they’d get their own moments in the spotlight. Junsu lends his raspy tenor to a beautifully composed piece about the phases of love—from the innocence of youth to the experience and inevitable pain of adulthood. Written by Mijin Gamseong and Im Han-Byeol, “Age 7” is a lovely piece about at first believing love’s something as simple as being held in the arms of your mother, then growing to realize love requires hardship and sacrifice: “After walking more in life and maturing, I began to calculate when it came to love, The times I loved you innocently. I long for those days more today.”

One of the album’s most poignant pieces is penned by Park Yoochun. Entitled “Dad, You There?”, most guessed the song’s subject matter. Yoochun’s expression of his complex relationship with his father before his passing and his feelings after is thoughtful, carrying incredible emotional depth. The lyrics find him reflective, wondering if his father is by his side, even in times when he couldn’t see him or feel his presence: “You used to do everything with me. After letting you go, I was left alone, but you were sent to me again. Without you, just an empty shell.”

The vocal arrangement of the piece is amazing. While Yoochun’s voice is tender, Junsu’s is powerful and Jaejoong’s is so emotionally charged, you’d think he’d written the song for his own father. The gospel-tinged shade of the song lends itself to a jubilee-style ending that manages to linger even as the song fades.

“So-So” is another track with an emotional depth indicative of the mature ear of the men who took the song on. Written and composed by Hwi Jang-nim, Jeong Jae-yeob, and AQX, the song depicts a man’s folly as he enters a relationship. With the conceit of the seven days of the world’s creation versus the Seven Deadly Sins, it’s a clever and incredibly powerful song, illustrating a man wanting forgiveness for being too blind and too wasteful with the emotions of the woman who has given him her heart: “Forgive my sins. If only I could turn things back, this misery would be so-so.” 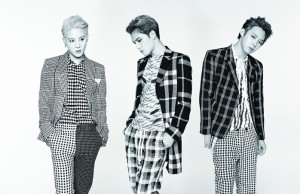 In the latter half of the album the tracks become both compositionally grand and vocally elegant. “Sad Dawn/Two Thirty in the Morning” reminds me a bit of In Heaven’s “Pierrot.” The music is triumphant—a drum-heavy foundation one could associate with a band like The Killers or Kings of Leon. Again the songwriter makes use of the conceit of time to illustrate a man who’s broken up with a woman he realizes a bit too late he can’t live without: “But why is it that when morning comes, my heart for you comes back like a habit? In the end, I called you.”

Jaejoong takes the reins as songwriter for four of the next five songs. One can’t deny that when the group sings a song one of their own members composed, the level of vocal excellence intensifies. “Let Me See” is very sparse in composition, making way for the loveliness of JYJ’s harmonization. One of the album’s most vocally exceptional tracks, the song’s contemplative, with a ballad’s melancholy stain: “Let me see let me see. When I’m falling down because I lack, because of you, even the piercing pain seems like a signal from you.”

Yoochun’s offerings illustrate wisdom beyond his twenty-eight years. In “30../Lazy Life,” he puts his life into perspective, reminiscing about times he’d meet up with Junsu and Jaejoong , even mentioning Junsu’s very distinctive “Eukyangkyang.” He talks about the nearness of enlistment, how his brother, Yoohwan, makes even the most tremulous feelings in his heart melt away. What’s most impressive about the track is Yoochun’s rapping. He’s actually improved beyond expectation, the laid-back, personal touch of the lyrics aiding his easy delivery.

Jaejoong’s next offering is another song about a woman who snares him only to try to let him go. “Baboboy” is actually quite a clever title. He’s the fool who’s fallen for this woman’s seduction, but it doesn’t seem like he regrets it one bit, proclaiming, “I may be a fool, but that’s just being a man.”

Then Jaejoong showcases more of his “rock spirit.” “Dear J” could’ve easily found a place on WWW, a powerful rock ballad that highlights his soaring vocal. This is an interesting piece, telling the story of the one he loves turning against herself and the two of them finding solace in each other’s arms: “No prison, open your eyes widely, your freedom is me. The first time in my life, we closed eyes together. My lover lover, you. Your freedom freedom, me. Don’t be in pain.”

“Creation” is as daring as its namesake, a powerful declaration of one’s fight for freedom, having the tenacity and fearlessness to face even the most harrowing fears ahead. Jaejoong speaks of the destiny the men have created for themselves, breaking from what held them back and forging a path without fear: “After spending energy and being twisted in pain, my miracle is hidden inside. That’s my creation.”

The album’s ending track “Valentine” was co-written by Chris Brown and Lonny Bereal and garnered a lot of attention, but probably not for the right reasons. Not only did the baggage attached to Brown’s name cause a stir, with “Ayy Girl” still a painful memory for many fans because of its obvious lack of real respect for the group it was offered to, many were hesitant. However, those fears were largely put to rest. The song could’ve easily been a B-side on one of Brown’s earlier albums. As the album’s only all-English track, the lyrics are simple, a guy imploring a girl to give him a chance: “It’s the rules we gonna break and the chance you gotta take if you wanna be in love.”

Remarkably their English is vastly improved from their debut, and the playfulness of the track meshes well with their vocals without being unnecessarily ostentatious. Reputation aside, Chris Brown and his team gave the boys a commendable piece of Top 40 R&B/pop. 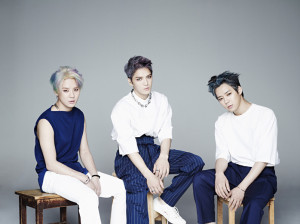 The hallmark of the JYJ sound is their vocal strength. Just Us is a testament to that tight-knit harmonic brilliance. It speaks not only to their vocal maturity, but also their undeniable connection as a group. It’s been three years since fans have had a complete project with all three voices, and they’ve come back sounding better than ever. Many, including the members themselves, questioned how they’d sound after so long—Yoochun hadn’t recorded more than one song with them, and Jaejoong and Junsu both had found varying levels of stylistic independence with their solo efforts.

Not only did Just Us allay any doubts, it provided fans with hope they haven’t had for quite some time. It’s a brilliantly constructed album from beginning to end, the combination of their own compositions and contributions from different writers and producers resulted in one of the best comebacks of 2014, and arguably one of the year’s best albums period. Like a rare few albums in 2014, JYJ’s comeback falls outside the small bubble of what most consider “K-pop” into the coveted realm of just beautifully rendered music.