Bon Appétit with Your Favorite Idols 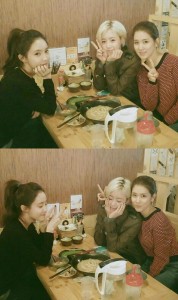 Becoming a successful K-pop idol has many basic requirements — apart from talent and wit, there’s also the extremely important factor of appearance. Even though everyone’s probably been told at least once that looks aren’t everything, we still often hear about extreme diet plans and plastic surgery gone right or wrong.

The latter is quite a sensitive topic, with denial being the most favored response when an individual is faced with such accusations. Whether the changes the celebrity seemed to go through were real or not, a common excuse turns out to be weight loss. And that brings us to dieting.

But this time, let’s not focus on the tips and tricks celebrities disclose about their typical meal plans, but rather the food itself.

In a world where almost everything you put into your stomach has to be controlled, there seems to be a lot of focus on food in both Korean variety shows and celebrities’ SNS accounts. Recently, there’s been a good number of cooking-themed programs, including Gourmet Road, which features idols trying out selections of exotic dishes, and Master Chef Korea Celebrity, the tense competition that placed public figures against each other in the kitchen.

Even on other variety shows where the central theme isn’t food, idols are often shown with their eyes glued to whatever meat is sizzling on the grill. For example, most episodes of Exo‘s Showtime had a scene (or multiple ones) where the members are consuming some form of sustenance, whether it was fried chicken or Chinese hotpot. Member Luhan even confirmed this detail in an interview:

If anyone has watched Showtime from beginning to end, you might notice one thing — we keep eating in every episode.

Besides inducing some stomach growling on the viewers’ part, frequent attention to food on public broadcasts can also help establish a distinct character for idols. B.A.P‘s Daehyun is known for his special interest in everything edible, even  stealing from his fellow members in desperate measures. His innate love for food therefore makes any show where his mouth begins to water all the more hilarious. 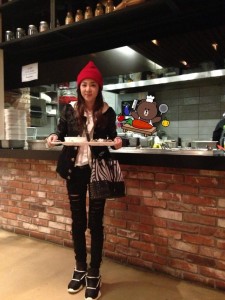 On the other hand, social media has undoubtedly become a major means of communication between celebrities and their fans, shortening the distance between the two parties in a way variety is unable to do. Whether it’s a makeup-less selca before bed or proof of trolling a fellow member, any post by celebrities on Twitter, Instagram, Me2day, or other blog-like platforms is sure to be a satisfying gift for fans. Amongst these uploads, food seems to be a prevalent topic too.

But why? Sure, it’s a vital part of our lives, but so are other daily events like going to the toilet. And I can’t recall a variety program showing idols mentioning their desire to find a restroom or Twitter updates going on about bathroom breaks.

Let’s start off with the academic answer. If you’ve ever been around a group of Koreans and witnessed an encounter between acquaintances who seem to have not seen each other for a while, perhaps you overheard one say to the other something along the lines of, “Let’s have a meal together.” (Dramas often depict this too!) Although it may seem similar to Westerners’ notion of grabbing lunch together to catch up, the importance of the food consumed is on a different level.

Back when Korea was occupied by the Japanese at the beginning of the 1900s, a portion of the country’s agricultural fields were exported and used to feed the natives of Japan. As a result, Korea experienced a food shortage period for decades. The Korean War that followed elongated this shortage, and it wasn’t until industrialization in the 1970s that the bellies of citizens could be slightly fuller. Therefore, food is a big deal for Koreans even today.

In a similar way, perhaps celebrities simply take advantage of any chance to have a feast on broadcast because of their regular shortage of food — the result of the need for strict dieting. If the production team of a variety program decides on a meal as the setting to film or provides food to try on camera, declining their offers would make an idol seem rude and ungracious, which most likely displeases management companies even more than the idol waking up with a swollen face the next day. Luckily, this gives idols the temporary freedom to shove as many bites down as possible. 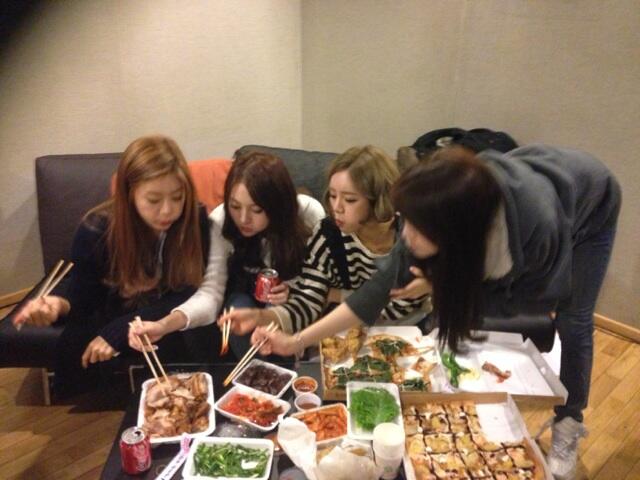 Then, there’s the possibility of companies leaning toward showing idols consuming big meals in order to reassure fans and the public that they’re not being starved. A handful of idols have been reported to go to extreme lengths to limit calorie intake, most famously SNSD with their 800/900/1200-calorie diet (there are different versions). To refute this rumor, the girls claimed that their food bills surpassed Super Junior‘s and a single meal felt like it could go up to 3000 calories.

Split between nine members, that makes everyone’s intake 1000 calories a day if they were to have three meals, so they confirmed the rumors! But of course, SNSD was actually referring to 3000 calories per member for each meal. The average person only consumes around 2000 calories a day, so there’s no doubt the thin ladies were exaggerating.

By discussing their big appetites and showcasing some food action, however, SNSD can somewhat dismiss the idea of painful dieting. Likewise, many idols often use rigorous dance and exercise routines as well as high metabolism rates to account for their maintenance of good body figures. To support this, a few snaps of large-portioned, non-diet-looking meals help extensively. Whether they actually consume it all or not is another story. 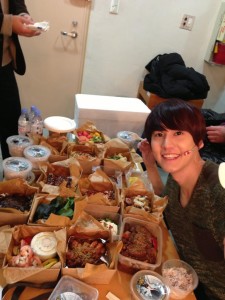 Another reason for celebrities to update or Tweet is to thank fans for edible gifts. Not surprisingly, this may be one of the most popular type of food pictures. When SJ’s maknae Kyuhyun first opened his Twitter account, he often only published an update when he had new photos of fan-given food to show. That’s changed, but it’s still not difficult to find some noms in his recent pics. MBLAQ‘s Seungho has many similar photos on his Twitter too.

Celebrities could also just be like the rest of us and harbor the desire to share a photo of a yummy dish — like G-Dragon — or give an update to their lives — like Jun. K — while avoiding snapping a selca. The Instagram of songstress Lyn, who isn’t considered an idol, is also similar to a food diary.

What makes feasting idols so attractive to fans is the message that it’s ok to eat (not to mention the chipmunk cheeks that appear as a result of overstuffed mouths — sorry, I digress). K-pop idols are labeled so for a reason: in many cases, fans look up to them. Singers and actors alike set examples for regular citizens who follow them online through broadcast programs or social media, making their actions hold a high level of power and influence.

A banana or sweet potato diet may sound inhumane on its own, but when practiced by a public figure, it could become all the more attractive for fans. An idol scarfing down bulgogi and rice, on the other hand, promotes eating in general, which is a much healthier idea.

And perhaps all the previously mentioned grounds for celebrities making appearances with food in public are inaccurate. After all, (speaking from personal experience,) it’s not exactly difficult to be a foodie.