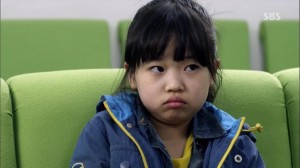 God’s Gift is stretching into the third quartile of its run, and the pace and suspense is not letting up one bit. I’m just going to jump the gun and announce the crucial climax reveal: Saet-byul is, unfortunately, kidnapped again. Our main leads have had no success in influencing fate in any way despite their persistent attempts to do so, or have they?

This whole deal with Fate started out pretty intriguing, but the audience aren’t really getting any answers regarding this supernatural theme. What exactly are the rules of this gift — can Fate actually be changed, or is it already set in stone and they’re just flogging a dead horse? I’m pretty sure we’ll eventually get our answers in the last stretch of God’s Gift, but I wish that our appetite could have be satiated bit by bit throughout the whole journey. Nonetheless, I do have faith in this drama, that loose ends will be tied up, and that the conclusion will be solid and not reek of a cop-out.

Although the writer seems to be putting across the point that while the exact happenings can be tweaked here and there, the resulting situation is stubbornly staying on its initial path. Mimi wasn’t immediately killed on impact, but she still died in the hospital a few days after the original date. Saet-byul managed to identify the tattooed man and attempt to escape from him, but it seems like she has been kidnapped all the same. The situation looks pretty dismal for the good guys as of now. The only thing going for them, is that this time round, they are armed with a whole lot more clues about the killer, and hopefully that will be sufficient to push Fate off its course, and save Saet-byul’s life, right? 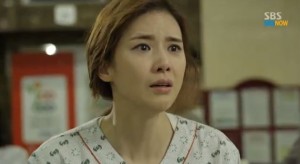 It’s a great contrast that while it was Soo-hyun who had to face the guilt of losing Saet-byul initially, the blame lies on Ji-hoon in this alternate reality. Given that he was quite a jerk about the kidnapping by continually pinning the fault on Soo-hyun, it’s great to see that Soo-hyun is being the bigger person this time, by skipping out on the blame game. She’s a woman on a mission, and ain’t nobody gonna stop her.

That said, I was sorely disappointed in Soo-hyun when she actually suspected Dong-chan for a moment, and thought that he was getting close to her for his own ulterior motives. Yes, the audience does possess omnipotent sight that helps us see how genuine Dong-chan’s intentions are, and what a moral character he is, but I was utterly shocked that she was so easily persuaded by her shady husband, into suspecting Dong-chan. After all the times Dong-chan had to risk his life to save her from her own impulsiveness, I can’t believe she had the guts to accuse him, even if he did hide the truth from her. Fortunately for us and for them, this conflict was quickly wrapped up and chucked to the side. 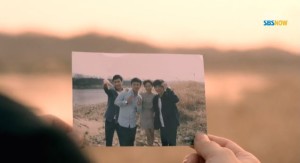 But this brings us to a whole other can of worms. While the audience is constantly reminded of how smart and upright Dong-chan’s part is in this whole issue, the truth does not seems as straightforward. Now that the killer seems to be mired somehow in Dong-chan’s past, we can be assured that Dong-chan’s involvement might not be as superficial as we initially thought. Especially the hairpin, considering the amount of screen time this hairpin has, I can already tell that it’s spelling trouble for Dong-chan and it gives me the creeps.

In line with the featuring of the hairpin, I want to give this drama props for the amazing amount of foreshadowing and details that it has weaved into the storytelling. It shows how tight the writing is, and I love it when the audience has the opportunity to play detective and see how observant they have been, which, in my case, is not at all. Hence, I find myself constantly having to go back to past episodes to refresh certain scenes.

My hopes for a bromance reconciliation seemed to have been a little premature, especially now that we are given clues that Woo-jin is a lot less innocent than he looks. Firstly, nobody who goes around burning evidence and taking shady calls is going to get into anyone’s good books. Secondly, it was revealed that it was actually Woo-jin who shot Yong-gyu in the head, the exact thing that has been weighing on Dong-chan’s conscience since forever. And the fact that Woo-jin didn’t even mention that to Dong-chan, doesn’t sit well in my friendship manual at all. Minus brownie points for him, though I’m curious what leverage these bad guys have on Woo-jin, as well as Ji-hoon. 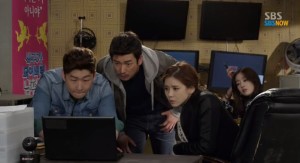 I enjoy that the characters are not one-dimensional, and evidently a lot of thought has been given into their characterizations, from the main leads down to the sidekicks. In fact, the side characters having been tugging severely at my heartstrings in the recent episodes.. The scene where Yong-gyu apologized to Soo-hyun for not protecting Saet-byul, despite having been beaten up by the killer. Tug one. The scene where Jenny insisted that saving Saet-byul is a debt she has to repay to Soo-hyun, despite having been injured while trying to do so. Tug two. It’s especially rewarding for the audience when the writer gives scene-stealing moments to the side characters.

Another relationship that should have more airtime, is the Dong-chan, Jenny, Byung-tae friendship circle, which is just so heartwarming on so many fronts. Although Dong-chan is as brusque as any gangster, the way his face broke out in worry when he saw Jenny’s injuries, and the time he pushed her to safety to take on the baddies on his own, just screams valiant knight to no end. How do you expect Jenny to not have a crush on you? I didn’t expect Jenny to be nursing a one-sided love towards Dong-chan, but it speaks volumes that she’s still so willing to help Soo-hyun, even though she is the potential love rival. Since we have been seeing quite a bit of Dong-chan’s past, it would be fun to see how Dong-chan eventually became the ringleader of the Three Musketeers.

Oh, and how can I forget the last rival in this romance battle — Saet-byul. Her worship of Dong-chan seems grounded in how he’s a shining knight in armour to her, and it contrasts well with her idol worship of Tae-oh. I didn’t really expect this idol singer out of nowhere to be embroiled in this mystery, but that’s definitely a plot that hasn’t been used before.

Lastly, to send you off for the epic finale weeks, here’s a snippet of how Saet-byul’s crush started. Because really, with Jo Seung-woo‘s husky singing voice, who wouldn’t fall in love?

Saet-byul: Wait ten years, and then marry me?