Toheart's MV is So "Delicious" 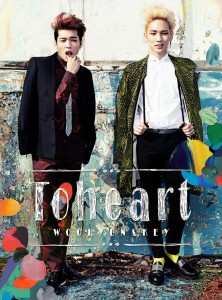 It’s been a little over half a year since the big SM–Woollim merge. Fans of Infinite — one of Woollim’s major artists — along with supporters of the other singers in the company, worried about whether the merge would cause a drastic change in style and sound. Fortunately, through indie band Nell‘s new album, we’ve seen that this is not the case. And now, we’re presented with our first collaboration between SM and Woollim artists through Toheart, the duo made up of SHINee‘s Key and Infinite’s Woohyun. After the announcement, I was just happy Key could finally show off his vocals again.

Both 91-liners, Key and Woohyun have known to be close friends for a while now, so it was perhaps in the best interest of their companies to build on this relationship through a musical release. Fortunately, their chemistry — if we can use this term — shines through in the new MV for “Delicious,” the title song off their new mini album, Toheart.

“Delicious” reveals a situation in which both Key and Woohyun have fallen for the same girl, and they’re confessing their love for this lucky lady through the song. Of course, the cute lyrics and funky beat contribute to the fun aura of the song, but the chorus of the song was a bit anti-climatic. But no worries, the MV makes up for it all.

Fortunately, this MV has a decent plot (sort of) that matches the song. We begin — with “Intro” from the mini album as the backdrop — seeing the two boys in an attic-styled room flipping through toys and journals from childhood. 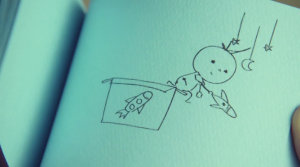 This sets up Key and Woohyun as best friends since their toddler years, and even though one preferred building blocks and rockets and the other books and journals, they end up meeting and falling for the same girl. And when the title song begins around one minute into the prolonged MV, it officially marks the transition into adulthood.

Although there were obviously cameras on them the whole time, it’s clear that Key and Woohyun had little trouble playing around with each other even in just the intro segment. By having Toheart be composed of a pair of best friends in real life, there was no need to go through awkward greetings on set or take time to learn each other’s personalities. Their companies definitely saved time and effort in this aspect. 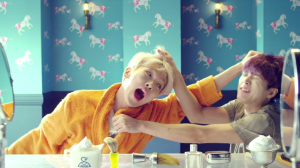 By the time “Delicious” begins playing, we’re thrust into serious competition mode. Key and Woohyun  live together in this world, and nights are filled with sparkly rockets, pillow fights, and laughter. Mornings, on the other hand, are times for shaving their non-existent stubble, gagging on toothbrushes, and pulling each other’s hair. They also visit the local diner for a date, each boy with a bouquet in hand.

Correct me if I’m wrong, but don’t dates usually only consist of only two people? Sure, many girls around the world may not mind going on a date with both Key and Woohyun at the same time, but I don’t think this strategy is the healthiest for a serious relationship. Nevertheless, the playful competition gives viewers a glimpse of their childish personalities that haven’t changed since the beginning of the MV. 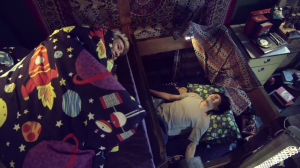 The fact that the diner is titled “Milky Way Diner” is also a brilliant detail. Key’s childhood story pictured him playing with toy rockets, and the boys both have galaxy-inspired bedding. In the present, they dance in front of a similar-themed set at the diner. It’s as if this delicious love brings Key and Woohyun out of their fantasies to find what they love in reality.

Towards the end of “Delicious,” even if you remember nothing else about the song, I doubt you’ll be able to erase these two lines from your mind:

The repetition of the fantastic and elastic Engrish may seem excessive at times, but I enjoy the accompanying choreography so much that I’m willing to bear with it. Full of body-rolling and finger-pointing, the dance for the song does justice to the lighthearted mood. While transitioning between singing parts, Key and Woohyun even try to steal each other’s thunder by taking the other’s flower for the girl. One can only imagine how fun the live performances will be. 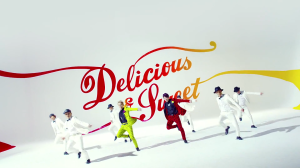 I also love that, for the main dance set, the stylists dressed both Key and Woohyun in bright yellow and red, respectively, while somewhat camouflaging the backup dancers in white suits. Since a majority of K-pop songs are performance-based, movement in the background — be it other members or backup performers — often act as distractions. Here, however, the potential diversions only act as entourages for Toheart as they attempt to dance their ways into the girl’s heart.

Despite the usually distressing implications of best friends crushing on the same girl, the bright colors in the scenes and Key and Woohyun’s hilarious expressions keep the MV vibrant and cheerful. Although the MV’s still following the main K-pop trend of keeping artists inside box sets, the designs here were different, with various rooms and places being represented throughout the story arc. 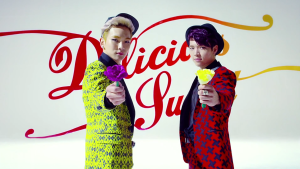 And there’s no better way to end an MV than with a slight twist. My guess for the resolution for “Delicious” was that Key and Woohyun would both ditch the girl to honor their friendship. But since Key already swore multiple times that this love is delicious, it only makes sense that the two friends battle it out to the very end, taking their competition to the viewers with commanding choose-my-rose gazes. The lyrics also blatantly ask listeners to choose one of out the two boys, so perhaps the ending was predictable all along. 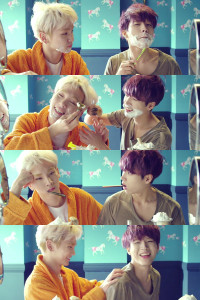 While fans are suffering over the dilemma that is Key vs. Woohyun, we’re then surprised again with a behind-the-scenes segment which, I’m sure, is the favorite part of the whole MV for many viewers. Key and Woohyun are back in the bathroom up to no good, with Woohyun even using a toothbrush to apply his shaving cream. The credits roll during these last two minutes, but I doubt many viewers are paying attention to the names sliding across the screen. However, this is still a smart way to provide fans with more material to watch while still acknowledging the hard work put into creating the video.

Overall, despite the song itself being unable to blow me all the way to the Milky Way (Diner), the MV for was greatly satisfying. Rating: 4.6/5

Did you think “Delicious” was as sweet and nutritious as Key and Woohyun declared?