First Impressions of 'This is Infinite' 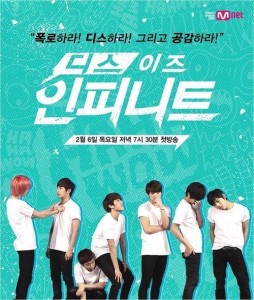 Attention all Inspirits, Infinite is finally back with a new variety show for 2014! After being away from the variety scene in 2013 due to a extremely packed schedule consisting of two new albums as well as a world tour, Infinite has decided to remind their fans that they are one of the up and coming variety-dols.

This is Infinite is their fifth variety show, after You Are My Oppa in 2010, Sesame Player and Birth of a Family in 2011, as well as Ranking King in 2012. So in some way, they are considered veterans in the variety world. The boys of Infinite are incredibly entertaining in variety, and all the more so when they are allowed to helm their own show. The members posses no filter of any sort, whether they are teasing each other, or destroying their own image (see Sung-jong’s  zombie impersonation). Something that I appreciate, is that no one member is the one in-charge of being funny. While some members, such as L, tend to fade into the background, they each have their own variety quirks and personalities and can be trusted to hold their own in any situation.

Episode 1 and the first part of Episode 2 was centered around the mission of choosing Infinite’s new leader. The first episode started great, springing on us some of the best off-stage footage of Infinite. In order to find the member who harbours secret leadership talent, the staff staged hidden camera situations, to test which members would be able to step up to the plate. Dong-woo steals fangirls’ hearts, when he plays true to his sweetheart image and was the only one to take the initiative to help a female staff to carry some heavy bags.

After that, members were made to guess their individual pros and cons of being the leader, which the other members have indicated. What amused me the most, was seeing the disconnect between the member’s opinion about himself, compared to the other members’ opinion about him. Woo-hyun was especially embarrassed, since he kept trying to guess his own advantage, when really, the members didn’t think he had any. 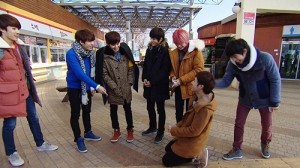 After that, the show moves on to the main gist of the episode, where the members take turns to play the role of a leader for a particular mission. I was pretty disappointed with how this segment was planned and edited. Firstly, most of the tasks weren’t all that interesting, and could definitely have been planned to be more ridiculous. For example, Woo-hyun’s mission was to coordinate the members to prepare seven dishes in an hour. My reaction — Um, that’s it? No extra restrictions such as limiting them to strange ingredients or useless utensils? Did the staff not learn a trick or two from Running Man?

Also, the way the segments and transitions were edited made the episode feel rushed, and I was left wanting a lot more from each segment. In any case, we find out that although Sung-yeol was voted the leader in the end, the members finally realized how tough it was for Sung-gyu to have been the leader of such a rowdy bunch for four years, which was really heartwarming.

The remainder of Episode 2 had a Valentine’s Day theme, where the mission was to search for the member who understood females the best. I especially like the segment, where the managers, stylists, and staff were interviewed about the different members and their real-life characters, since these people have the most off-screen interaction with Infinite. Fangirls’ image of L was shattered, when his manager revealed that his handsome face actually hides a man who doesn’t wash often. 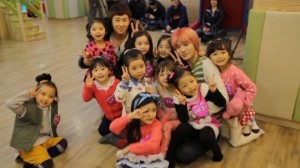 Fans were rewarded with adorable footage of Infinite interacting with little girls. The members were given 30 minutes to play with them, and then the girls would vote for their favourite member. The process revealed the following — Sung-gyu is terribly awkward with kids due to his age, Dong-woo is a kid himself as he actually wants to read the picture books for himself, Woo-hyun is unknown amongst girls under the age of 10, Hoya is an ‘ugly ahjusshi’, Sung-yeol only gets betrayed by kids, L’s fangirls span all ages, and Sung-jong is basically ready to be a dad.

I’m excited for the following episodes and missions, but I do wish the segments’ transitions could be less abrupt. The editing for this show seems to be doing it a disservice, which is really unfortunate. However, Episode 2 did show significant improvement from Episode 1, which is always a good sign.

In any case, there’s nothing that can mask Infinite’s hilarity. You could probably just leave Infinite in a room and fans would be satisfied by just watching the members diss each other all day long.