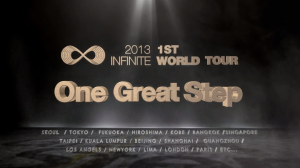 In celebration of their 3 year anniversary, ’80s-pop septet Infinite hosted a live-chat session with their fans and dropped some big news: they will soon be embarking on their first world tour.

The group debuted back in 2010 and quickly shed their rookie title when they started gaining recognition with “BTD (Before the Dawn)” with their signature scorpion move back in 2011. Since then, the group has garnered a large fanbase and built a name for themselves in the K-pop world as idol heavyweights.

The “One Great Step” tour will kick off in August in Seoul before moving across Asia. But don’t worry. Infinite’s tour will be an actual world tour, none of this “let’s pretend that Asia is the whole world” nonsense. Besides dates in Korea, Thailand, China, Singapore, and Malaysia, the group announced stops in Britain, France, Peru, and the United States. If you don’t live in any of those places, fear not because the members said that they will be adding more along the way. So keep an eye out for further announcements.

And if you’re wondering what’s with the name of the tour, Sungyeol said in their press conference that they were inspired by Niel Armstrong’s famed quote after walking on the moon. A bit lofty, but with a name like Infinite, it’s no surprise that they are upping the ante.

Are you excited, readers? What stops do you plan on attending?