Sistar Drops "Give It To Me" MV 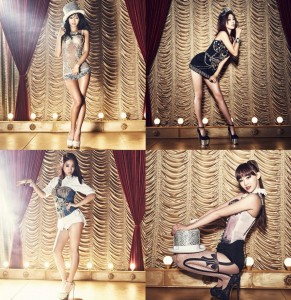 Even though subunit Sistar19 promoted just a few months ago, it’s been nearly a year since Sistar released the cute summer hit “Loving U” and two years since they dropped their last full-length album So Cool, but the wait is over because Sistar is back.

The group made the announcement of their comeback at the beginning of the month, and many of us predicted that Sistar would return to their typical sound and style. But their Moulin Rouge-inspired concept plus their teasers seemed to mean that they were going in a new direction.

So when they dropped their music video for their single “Give It To Me” just earlier today, I know I wasn’t the only one excited to see if that was true. At first glance, it seems the concept isn’t as gimmicky as it easily could have been, and the appearance by comedian and MC Shin Dong-yup makes for some humor mixed in with the sexiness.

Along with their music video, Sistar released their album, also titled Give It To Me. I just hope it proves to be better than their last release, which I found lacking. For now, I’ll just giggle at Shin Dong-yup next to the sexy Sistar.

What are your thoughts, readers? Does the new concept do it for you?