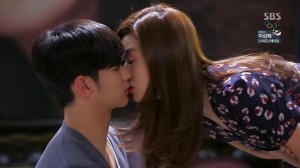 Yay, good news for everyone out there who has stuck on with the drama — the cute is back, and none the sooner. Finally, we are getting what we signed up for and the focus has shifted back to the developing romance storyline.

While the villain storyline isn’t entirely wrapped up yet, at least the focus has shifted from how-many-will-the-villain-kill to let’s-bring-the-villain-down. That’s something that’s much more gratifying to watch — to finally see Jae-kyung losing in his game and the other characters cottoning on to his carefully stitched web of lies.

Also, this creates an opportunity for Hwi-kyung to play an alternative role, since we can all agree his chances of getting the girl is zilch. Thus, I’m glad that he gets to participate in the action in another way, by collaborating with the investigators and Min-joon to bring his hyung down. Or else, his character might have gone the way of Se-mi, who seems to have fallen off the face of the earth. His dense-ness and tactlessness, which was pretty annoying initially since he was pursuing Song-yi non-stop, has actually played a part in lulling his brother into a false sense of security. Jae-kyung seems to believe that Hwi-kyung has temporary amnesia, and kudos to Hwi-kyung for coming up with that pretense. Who knew a concussion could bring out the brain in you.

Hwi-kyung also impressed me when he approached Min-joon for help, and gave him credit for warning him correctly about his brother. It’s not easy for a guy to put down his pride in front of another man and admit his mistake, much less a rival in love. Now, this shrewd and mature Hwi-kyung, I like. A lot. 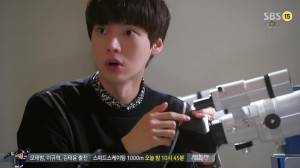 Another bromance in the works is the Yoon-jae and Min-joon hyung-dongsaeng relationship. Yoon-jae tries to sweetly act as an oppa to Song-yi, by reprimanding her for staying out all night and even goes to intimidate Min-joon. But then, he totally loses his scary factor when he geeks out over Min-joon’s mutual interest in astronomy, and suddenly, it’s all ‘Min-joon hyung, Min-joon hyung’ left and right. Yoon-jae has also upped the standard for brothers everywhere, when he informs Min-joon about all of Song-yi’s quirks, habits and personality, which is a real testament to how much he loves and understands his sister behind his stoic exterior. I’m glad the actor, Ahn Jae-hyun, is getting a lot of love for this role.

The drama has been getting a lot of things right in my book. Honesty regarding Min-joon’s impending departure, check. No noble sacrifice that is ‘for your own good’, check. Less than one episode spent on characters wallowing in self-pity, check. Song-yi being refreshingly straightforward about wanting to spend their last month together, check. Skinship and kisses, check. Skinship and kisses initiated by Song-yi, check. Wow, will this keep going till the end?

I’m unsure where Min-joon is going with his promise to not leave. I highly doubt he’s lying, which probably means that he’s not planning to return to his planet, and which implies risking his life. While I doubt a romance comedy is going to spring such an ending on its audience, I am interested in how the writers plan to deliver the ending.

Something that piqued my interest during the ending of Episode 17, was the scene where Song-yi was desperately searching for Min-joon. There’s no way he didn’t hear her screaming at her top of her voice, which leads me to think that he was testing her reaction, for the eventual possibility that he will disappear. And from his facial expression, you can tell her reaction did not reassure him one bit, which probably made it even more challenging for him to leave with a clear conscience. Is that what made him decide to stay on? 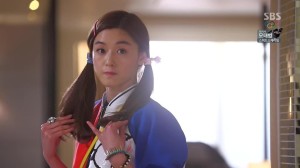 Song-yi is totally killing me with her character nuances, and I absolutely love it. Her first reaction when she realizes that he’s not going to grow old? Find ways to defy her own age — which includes blowing air into a dishwashing glove, eating collagen from pork rinds, and my all-time favourite — dressing like a five-year old (Min-joon’s and Yoon-jae’s reactions were great). Her solution for initiating more skinship? Write her own script, which includes backhugs, and then make him rehearse it together. Her method of pushing him away? Protest so weakly, that his silence means she has no choice but to stay with him. Pure awesomeness.

Being a top actress, we have seen sufficient evidence that her ego is reasonably sized. She can spout things like how she has been voted the number one celebrity that people want to date, but she’s still a total newbie when it comes to a real relationship. As much as she affirms to herself that she’s a superior catch, she’s still adorably insecure when it comes to Min-joon’s feelings. She’s always second-guessing herself, and worried that he’s imagining her to be her doppelganger when he kisses her. Now we know, even top celebrities have such worries. 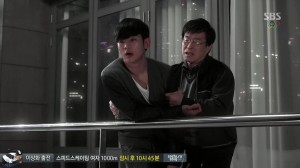 Min-joon has also demonstrated enormous amounts of human emotion in these two episodes — smiling when Song-yi was winning (by cheating) in Go-Stop, crying when he confessed that he had to leave in a month, even getting (adorably) drunk when he realized how unfair his life is. Now, we all know what kind of drunk Min-joon is — the brutally honest kind. The kind who will tell his only friend, Lawyer Jang (Kim Chang-wan), that time spent with him instead of Song-yi is time wasted. So much for being friends for 30 plus years.

And it’s all the more heartwarming that it’s Song-yi who allowed him to experience such a rollercoaster of emotions. She barged her way into his life, not knowing that she completely turned his life upside down by doing so. She made him worry about her; she made him care about her; she made him feel jealous about her. She made him realize, that there is someone on Earth that is worth living for, worth sacrificing for. It’s fitting that he no longer lectures about how love is irrational, and it’s something that humans make up in their head. Now, he has to eat his own words, since he has finally experienced it for himself.

So, what do you guys think about Min-joon’s promise to not leave? And, what else can you add to the list of things that the drama is doing right?