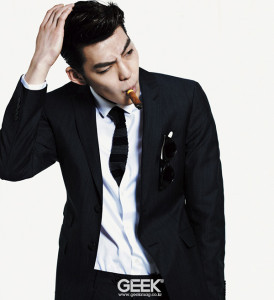 Actor Kim Woo-bin has been growing in popularity for the past couple years and it seems that 2013 is his breakout year. Woo-bin has starred in several dramas and movies and received much praise for his acting. But how did he get to where he is today?

Kim Woo-bin was actually born Kim Hyun-joong and became a model in 2009 at the age of 20. He has since walked the runway for many designers and even modeled in Seoul’s Fashion week every year since his debut.

After only one year of modeling, Kim Woo-bin starred in his first CF for Samsung and it was then that he began to get interested in acting. Woo-bin’s first acting role came as Kang Mi-reu, AKA Mad Mireu, in White Christmas. Although ratings were low for the mini-drama, White Christmas became somewhat of a cult hit.

Woo-bin’s acting in White Christmas also gained him his next role as an outer space vampire in Vampire Idol along with with two of his fellow actors from White Christmas. Although originally scheduled for 120 episodes, low viewer ratings lead to the show’s end at only 79 episodes. 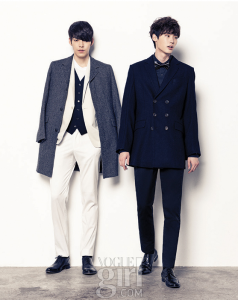 In between A Gentleman’s Dignity and Heirs, however, Woo-bin stayed busy with more CFs and endorsements, a cameo in To The Beautiful You, and a role in School 2013 which spawned the epic bromance between himself and fellow model-turned-actor Lee Jong-suk. Their close friendship and fanservice generated multiple articles and continues to be a popular ship despite Kim Woo-bin being in a long-term relationship.

Kim Woo-bin has also been capturing hearts in his latest drama Heirs in which he plays bad boy Choi Young-do; his charismatic acting has been stealing the spotlight for the majority of his scenes.

It is interesting to note that the majority of Kim Woo-bin’s roles have been bad boy types. There is no question that he plays these characters well — few actors could simultaneously be a jerk and a sympathetic character — but is he getting stuck into one type of role?

While I love his charismatic bad boy acting, I wonder how his acting is when it comes to different types of characters. Hopefully, his rising popularity will allow him to receive a variety of roles and break out of the stereotype he is known for playing.

Kim Woo-bin also plays a bad boy — albeit in a much darker role — in his first movie Friend 2. Friend 2 is a sequel to the hit 2001 movie Friend and while not having achieved the same amount of viewership, Friend 2 has been dominating the box office for the past few weekends.

Although having only acted in a few dramas, Kim Woo-bin’s potential has definitely been noticed. Woo-bin even received his first awards earlier this year, winning the New Star Award at the 8th Annual Asia Model Festival Awards as well as Best Rookie Actor (School 2013) at the 2nd APAN Star Awards (Daejeon Drama Festival). 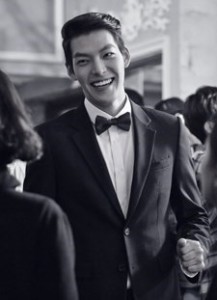 While Kim Woo-bin’s future plans once Heirs finishes filming have not yet been determined, it is rumored that he is being courted to star in a heist movie from the same company that produced Friend 2.

And although there’s no news on the drama front, I sincerely hope his next drama is not another teenage school drama. I’d love to see Kim Woo-bin take on a different role and challenge himself. Perhaps his rising popularity will allow for that sooner rather than later.

Kim Woo-bin has an allure to him that few actors his age possess. He is not conventionally attractive but somehow has still managed to capture the hearts of many. He’s also strangely charismatic with the troublemaker characters he plays. Still, I’d love for him to be the lead in a drama instead of just a second lead. Here’s to hoping that happens soon.

How did you come across Kim Woo-bin? Favorite role of his?