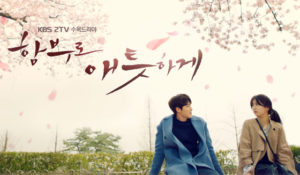 The hype surrounding the new drama Uncontrollably Fond was unsurprisingly large. After all, the leads are Miss A‘s Suzy, the “Nation’s First Love,” and popular actor Kim Woo-bin. The premise of the drama involves the two in a love story that transcends time. The two were lovers in the past, but split, and meet years later as completely different people when Suzy’s character tries to ensure the cooperation of Kim Woo-bin’s in filming his documentary.

As is typical of dramas with lots of hype, viewers tend to veer on the critical side. We need solid proof that this drama will actually pull us in. Considering the first two episodes of Uncontrollably Fond, I’d say that the first episode did a good job of engaging the audience, but the second episode hit some rough waters as the number of clichés started to grow without abandon.

As always, there are spoilers ahead!

The drama begins with a dramatic scene: a man, played by Kim Woo-bin, has stolen a gangster boss’s woman and is trying to marry her. This does not work out, and they are attacked by the gangster boss’s lackeys. Soon, the man takes a shot through the heart. Even so, the man refuses to die and we later discover the entire scene was fake — it was the ending scene to a drama, and Kim Woo-bin’s character is an actor named Shin Joon-young. 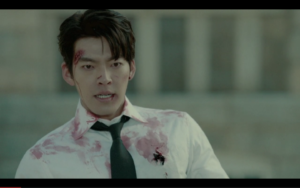 Right from the get-go, the drama gives us a nice twist. Its refusal to be over-dramatic suggests that it will not play into cliché, irrational drama plots, and will make fun of them instead. The first scene provides a nice sampling to the tone of the rest of the episode, where we are thrown into stereotypical drama plots, only to have the scenarios defy our expectations and reconsider them through more realistic lenses.

The drama first does this by presenting a parallel between Shin Joon-young’s real life and his drama’s finale. In real life, he’s a famous star who is terminally ill and completely unwilling to die. In the drama, he similarly lacks the ability to escape death.

Joon-young later agrees to “die just this once” in the drama as requested of him as an actor, but the irony is that the death scene in the drama hits a little too close to home. Though Joon-young is reassured that he will not be required to die in future dramas that he picks up, he is all the more struck with the fact that in dramas he can die over and over again, but in life he only has one chance. And if he dies, that’s it. Through this, viewers might reconsider the events in a drama and contextualize them into their own lives. In dramas and other works of fiction, heroes and heroines are always so eager to sacrifice their lives for what they believe in, but it’s never as easy or as common as dramas make it out to be.

Similarly, Joon-young is unable to come to terms with his diagnosis, and waits for a drama-like miracle to occur that will ensure him of a longer lifespan. He continuously reconfirms with his doctor that the diagnosis is not a mistake, and this gives the drama a more realistic twist. In real life, we often do not get misdiagnosed, and neither can we escape the clutches of death. I’m particularly interested in seeing how this terminal illness will play out, and whether the drama will give us something contrived or something honest. 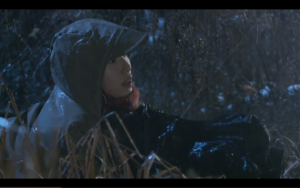 The female lead No-eul (Suzy) is also a character with a twist. We are first introduced to her as a PD (Production Director) that films illegal activity to expose corporate corruption; who literally braves storms in the name of justice. Soon, we discover that she shamelessly takes bribes. Though she only takes the bribes to pay off a large debt left to her by her father and to support her younger brother, she seems quite different from the typical female lead in that she’s not set on being someone morally upstanding. Other than her brother’s well-being, she does not care about much else. It seems that this character is really well thought out because you can immediately tell there is more to her than meets the eye. She must have gone through a lot for her to have become this way.

When the two main characters meet, there is an interesting tension between wanting to come close, but not wanting to at the same time. Though No-eul clearly needs Joon-young’s help, she does not acknowledge the existence of a shared past. Joon-young does the same. He treats her rudely and tries to be rid of her, but he constantly finds himself trying to ensure that she is doing well.

While the first episode does give a good amount of clichés, it manages to keep your interest as you wonder how things will play out. You wonder what the relationship is between the two leads and how things came to be. This relationship is explored through an extended flashback in the second episode, and what’s disappointing about the second episode is that the characters’ past together plays out like it would in a typical drama. 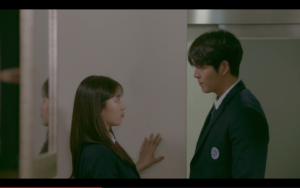 The younger version of No-eul presents her as the noble idiot that tries to help everyone, while Joon-young is a poor boy whose mother left his dad while pregnant because she felt as though she was not good enough for him. Of course, the two characters clash and sparks fly. It’s also stereotypical that she always had a crush on him but pretends to hate him, and that he gains interest in her because she’s not interested in him and is in great debt. Essentially she’s the damsel in distress and he feels the need to be her knight in shining armor — which is annoying and not atypical.

Though not quite satisfying at the moment, this backstory does layer the present because now we know more about our leads and can form speculations. In the past, both No-eul and Joon-young are optimistic and idealistic. No-eul helps everyone in need at the cost of her family’s well-being, and Joon-young thinks that if he studies hard enough, he will make his mother proud and make his biological father want to acknowledge the family. When it comes to the present day, No-eul cares little for justice. She was most likely hit with the reality that standing for justice and selflessness led to her family’s ruin. Though Joon-young’s eventual story is not as clearly alluded to, a clear change in his present situation is that he is now faced with the reality of certain and looming death. It’s nice that there is still a curious and unexplored void between their past and present that motivates us to continue watching the show.

Something I appreciated about the end of the second episode is that it brings us back to the present and also brings the clichés into the realm of reality. I suppose this dynamic echoes real life in some ways. In our youths, many of us live in a protected world where we don’t have to worry about many things like making money or dealing with immediately life-changing consequences. On the other hand, we all have to come to the real, working world some day and learn to fend for ourselves in a world that is not always on our side. This drama seems to allude to this issue, and it seems that we can look forward to an insightful journey as we grow with the characters.

The drama seems to have promise, but only time will tell whether or not the journey is worthwhile.

What did you think of the first two episodes? Will you be tuning in to the rest?