SM Entertainment, the “leaders in entertainment technology,” released info yesterday that they are going to hold a “new kind of music festival,” entitled “SMTown Week,” from December 21-29 at the KINTEX in Seoul. This SM-extravaganza concert series also turns out to hold double duty as the tenth anniversary celebration for TVXQ, for which the duo are reported to be preparing an “extra special concert.” 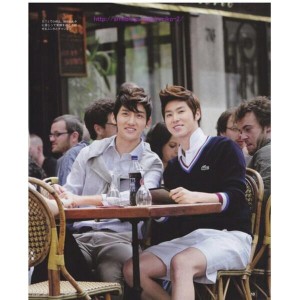 The festival lineup is pretty much as expected. Shinee and Girls’ Generation get a day apiece, f(x) gets side-shafted (as usual) into sharing with Exo, and Super Junior and TVXQ get two days as seniors in the company with the latter group getting the extra perk of having the primetime slot for their anniversary.

As mundane as it sounds on paper, I really do like the concept because it’s a way of getting the “SMTown Concert” feel along with giving each group ample time to perform both hits AND B-sides. SMTown concerts are usually pretty boring and one note because they’re basically the amalgamation of Music Show performances and random covers.

The f(x)/Exo pair look to be the most fascinating of the performances, because neither have held solo concerts before. Shinee comes in second in that regard because they haven’t really done a concert series on their latest Korean releases. Hopefully, they focus on the latter of the two Misconception albums instead of Everybody.

My cynical side, on the other hand, is betting money on Girls’ Generation being lazy and performing the exact same set from their ongoing Girls and Peace Tour and Super Junior performing their Super Show 5 Concert. As for the TVXQ Anniversary concert, I really hope it’s phenomenal–scratch that, it better be phenomenal, because their activities in Korea have been virtually non-existent recently. I also would love to see that their concert is a two-day set (as opposed to the same concert twice), but that’s just my head soaring far into the clouds.

Seoulmates, what are your perceptions of “SMTown Week”? Anyone thinking of going? Any TVXQ fans as psyched for their anniversary as I am?