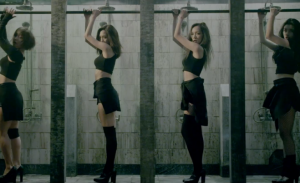 After an extended period of time away from the public as a group, Miss A has returned to the music scene with their new song “Hush,” a whispery, flirty song about seducing a lover.

When they’re not bringing chaos to supermarkets or destroying lollipops with one bite, the girls perform a sexy and sassy dance routine in the music video. My favorite shots are those in the subway and shower at the beginning – the lighting sets the right mood for the song’s angsty start with the silhouettes dancing behind curtains.

And how eye-catching is the ending when the girls’ faces morph into each other?

I must be honest, I was expecting something much bolder from Miss A. This is a girl group with a lot of talent, but they haven’t managed to keep up momentum after their successful debut with “Bad Girl, Good Girl.” While “Hush” isn’t a bad song by any means, I believe Miss A could have done much more with this comeback, from the choreography to the concept to the song to the video.

Despite my laments, it’s good to have Miss A back. It’s been over a year since “I Don’t Need a Man” and I’m always glad to hear new material from them. I’m looking forward to seeing the live performances of the song.

More from us in the near future, but in the meantime, any thoughts on Miss A’s comeback?