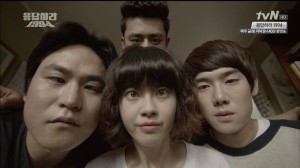 If only life was as easy to figure out as a magic eye picture–it would be so much easier for some of us and so worth the goofy crossed-eye face we needed to make to figure it out and see it.

The following are the 5 Things that happened in K-pop last week that I think were a bit more special than the rest.  If you are not up-to-date on your K-pop and don’t like spoilers, turn back now because spoilers most definitely ensue.

Duo Norazo made their comeback with the song “Wild Horses” and of course as is expected from them the song and MV are a bit crazy. Refreshingly different and entertaining, but still crazy.

it might be best to just get out of the kitchen.  The kids of Dad! Where Are You Going? were on kitchen duty during their last outing having to cook for their dads. Unfortunately, Ji-ah‘s skills seem to lie outside of the kitchen–although’s she’s really handy with a bottle of ketchup, to the consternation of her oppas.

One might think that playing  a game of jokju on a South Korean battleship would be a losing situation–every foul could potentially land your ball in the Pacific Ocean–but years of trying came up with the answer–tie the ball to a string. It’s a hilarious game of jokju on the last episode of Real Men with the Game Devil (Kim Sooro) of course finding a way to try and take advantage of the situation to win.

F.T. Island released their fifth mini album The Mood last week along with the MV for the title track “Madly.”  It’s a great tragic love song with a beautifully shot MV.

Reply 1994 keeps getting better each week and its ratings reflect this with each episode beating its previously set record.  It’s all the little things that make Reply 1994 so good, the little moments between characters–a look, a touch, a few very important words.  It was a tough trying to pick out my fave moment of the last week, from the fun with Magic Eye books (did you know if you stared at the ones in the show that they showed you can see it?), to the start of Samcheonpo and Yoon-jin‘s love, to Chilbong‘s confession to Na-jung. Well, need I say it more–Team Chilbongie all the way!  I have a sinking feeling that the relationship between Na-jung and Trash Oppa is going to go the way of Will & Grace after seeing the previews for the next episode, but the writer of Reply 1994 likes to throw a curve ball every now and then to keep us on our toes–so one can never be quite sure of what may happen next.