Who's Excited for Kahi's Comeback? 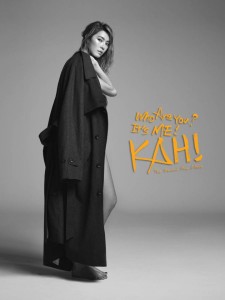 It’s fall, and it seems that this is the time of the year when female soloists pop out of the brush and make their presence felt. However, my one personal gripe about female soloists who go with a mature theme is that they’re basically limited to only one concept – I’m really sad and I’m missing some guy. If it’s any indication, recent releases by Sunmi and Song Ji-eun foreshadow more of what’s ahead as we trek through the frosty winter releases. However, melancholic releases may not always be the case. Ga-in made a splash with the lively “Bloom” last year, Seo In-young just released the upbeat “Love Me,” and IU (if you can consider her new concept to be “mature”) released this.

Kahi, given her age and established image, will undoubtedly go with a mature sexy concept for “It’s Me.” But as for the direction of the concept, that is still up in the air. Her first teaser leaves no doubt that she will indeed bring the sexy and fierce that she brought to After School:

Her second teaser, however, leads us to believe that she will bring something more:

Kahi wasn’t the lead or main vocalist of After School but she certainly had her fair share of lines in their songs. While her singing and rapping were never her standout qualities, she was still fairly decent. If anything, her previous solo endeavor showed signs of her vocal potential. But did you hear the voice that was showcased in her teaser? Are you sure that wasn’t Lee Hi or Ailee singing?

When Kahi departed from After School well over a year ago, we waited and anticipated her to go solo very soon. The fact that it took her this long to finally do it means that she has been working on a few things. One thing we know for certain is that Kahi’s strong persona always shine through, regardless of the concept. Don’t expect her to be gentle and weak, or longing for the touch of a man.

Kahi’s new mini-album, Who Are You?, features a handful of guest artists and also has Kahi contributing to the lyrics on three of its songs. It will likely indicate her growth as a performer and artist. What are you expecting from Kahi’s comeback?