Returning to the K-pop scene after five years, former Wonder Girls member Sunmi has had fans eagerly anticipating her début.

Fans were shocked at the sudden announcement of Sunmi’s departure from the Wonder Girls in 2010. The official announcement from JYP Entertainment stated that Sunmi wanted to focus on her studies and go to university. Everyone was surprised and fans attributed the leave to the tough conditions that Sunmi faced at only 17.

Sunmi confirmed part of this recently and even elaborated that she felt robotic and confused. However, she realized how much she loved singing and performing so when JYP approached her with a song she jumped at the chance. That song was “24 Hours” and it is a strong solo début for Sunmi.

“24 Hours” is about craving the touch of your lover and the MV does a great job of creating this mood. The MV exudes maturity but it never tries to be sexy. That the MV still is sexy can be attributed to the mature vibe Sunmi confidently pulls off. With another idol, crawling across a table in just a shirt could seem overtly sexual, as if they were trying too hard. Here, though, Sunmi owns it and the fact that the man is eating dinner sets up a nice contrast for her addiction. 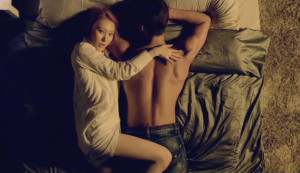 The scenes with the man follow the theme of not having enough time with your significant other. Their scenes together flash by quickly from the streets to a club to a bedroom. This highlights the quickness with which time passes for the couple.

The tango scene is one of the most interesting scenes in the MV because the dance closely ties in with the lyrics. Sunmi is the furthest from her boyfriend when the lyrics discuss fear of being consumed by this overwhelming passion. As she steps down and moves towards the man, the lyrics begin to shift:

But if it’s you and you hold me tight, I’m not afraid of it. I want to go on with you.

Immediately following this, Sunmi’s white outfit becomes black. This represents Sunmi becoming consumed with passion for the man; his black outfit becomes her outfit just as he becomes all she wants. What is interesting about this, though, is that the color black was chosen instead of red — the traditional color of passion and desire. 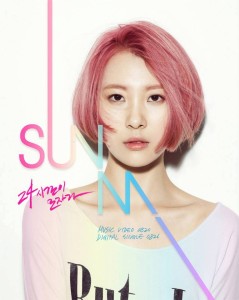 Overall, the MV was well shot and easy to follow. Even though “24 Hours” is partly about sex, the MV didn’t try to sell sex to the viewer. It took a more mature approach and was all the better for it. In addition, the MV demonstrated the lyrics well; the viewer could see Sunmi being overtaken by her want.

The song itself is well-constructed. The music is simple but catchy and the lyrics resonate with the viewer easily. “24 Hours” is like the honeymoon phase of dating where you can’t get enough of the other person. They take over your mind and you crave their presence and their touch. The only problem with “24 Hours” was the shift from the tango back to the rest of the song. The transition to the tango was well done, but I felt the transition out was lacking — it didn’t feel as natural as the first.

“24 Hours” is a great début for Sunmi. It showcases a more confident, mature side to her that we didn’t always see when she was a Wonder Girl. Her début has set the bar for Sunmi’s further releases and hopefully they will continue to be as satisfying as “24 Hours” is.