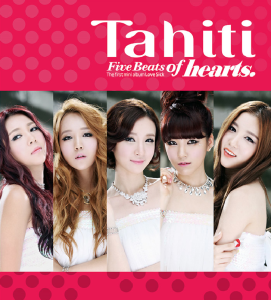 Tahiti seems to be a bit further under the radar than most. They debuted last year with the single “Tonight.” Though it had a decent amount of exposure before its release, that became useless after the disappointing, over-autotuned result of the single, and Tahiti was quickly forgotten. After reshuffling the member lineup, Tahiti released “Hasta Luego” which was a huge step-up from “Tonight.”

Now Tahiti are back with their first EP, Five Beats of Hearts that includes their previous releases, as well as a new B-side, “Blow My Speakers Out.” This time around they are promoting without maknae, Jin, due to the song’s sexy concept. With their member changes and bad to mediocre releases, there isn’t much expectation for Tahiti. But the big question is: should we expect much from them?

Thankfully, the song is not terrible. “Love Sick” starts with a nice piano hook and a sound similar to tongue clicking or tapping, which is faintly heard in the chorus and repeated in the break. The vibe is sensual, and the back and forth bridge is definitely the best part of the song. It’s a needed transition that also serves as a good hook. 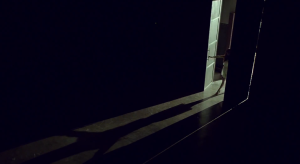 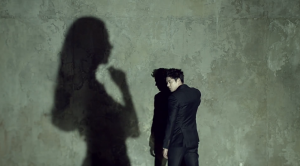 The song talks about a girl who seduces a terrible playboy until he’s head over heels in love with her. She makes sure she has control over him, then messes with him. The MV plays with this, though too subtly, by having scenes of an actor looking smug in the first half of the MV. Then, a scene where a woman opens a door to a dark room and a beam of light hits the actor’s eyes. The second half of the music video shows the actor looking defeated as the shadow of a woman hangs imposingly over him. All of this, though, is barely noticeable with the rest of the MV, which is a shame because I thought the image of the woman’s shadow over the man was visually appealing.

Besides the quick actor scenes, the MV shows the girls dancing in two rooms: a mansion type room with large windows and chandeliers and a black room with a large LED screen. The mansion room was easily the better set and features the girls dancing in two outfits, a loose black dress, and white dresses with extremely out of place pink heels. In the LED set, Tahiti were outfitted with leather dresses, which were the best outfits and complemented the girls very well. But the LED was distracting and clashed with the tone of the first set and feel of the song. Another bad point was the red and green outfits under their black garments, which look terribly cheap, but luckily don’t appear in the MV for long.

Like Tahiti’s previous choreography, the dancing was simple and awkward at times, particularly during the dance break. And like their previous choreography, they are noticeably out of sync. The dance hook and the finger tapping on their lips was cute. But the part in the chorus where they hit their hips doesn’t fit with the rest of the song, and the dress-throwing would’ve been good if it weren’t for what was under it.

If their singles “Hasta Luego” and “Pretty Face” showed anything, it showed that Tahiti aren’t completely useless vocal wise. Unfortunately, their singing in this single is sub-par and lacks energy.

“Love Sick” wasn’t a great release, but it was solid enough and coming in with zero expectations helps its cause.

Tahiti’s “Love Sick” lacks the spunk and sass of the original. The message is similar and the song is a watered down version of “Potential Breakup Song.” In comparison, Aly & AJ’s version boasts a much stronger message. In Tahiti’s song, the girl messes with the guy just as he’s messed with others, while Aly & AJ’s version features a girl who’s strong and is ready to throw away someone who has treated her poorly.

It’s also unfortunate that one of the dances from the song seems to be in the same vein as Dal Shabet’s “Be Ambitious,” which was released a month before “Love Sick”.

Of course, we don’t know whether the composer bought the rights or if he happened to create the same melody. This hasn’t made waves yet because no one really knows (or cares) about Tahiti. Time will tell.

Even without the ‘Potential’ and ‘Ambition’, “Love Sick” still manages to be a decent release, and Tahiti’s best effort so far, just perhaps not their most original.