Is T-ara's "Treasure Box" The Last Of Their Riches? 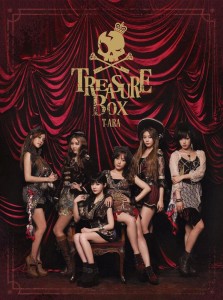 There are few idol groups who have had a more tumultuous time than T-ara. In early 2012, they were on top of their game, coming off a string of three gigantic singles (“Roly-Poly” “We Were In Love” “Cry Cry”) only to release their biggest and best record to date, “Lovey-Dovey.” Then their well-publicized and horribly handled bullying and management scandal happened, pushing member Hwayoung out of the group and burying T-ara under a deluge of bad press and netizen anger. I’m sure you’ve heard it all before.

Perhaps T-ara’s sound-swapping, member-shuffling management strategy should have been a tip off that they couldn’t quickly bounce back from the scandal. In contrast to perfectly synchronized peers like Girls’ Generation or the established sound of 2NE1, T-ara’s success always seemed to live and die by their latest single; they’ve never really been loved for some kind of unassailable idol status. The alleged bullying and Core Contents Media CEO Kim Kwang-Soo’s ineptitude may have shifted perception of T-ara from crazed hit machines to desperate, overworked attention-seekers.

What are the six (seven?) refugees of T-ara to do, then? The answer lies on an island of riches – they’ve hopped a plane to Japan, and promoted, promoted, promoted. While many Korean acts do stellar jobs in Japan – Girls’ Generation top charts, Kara come close, and SHINee sell well enough – none have approached the pop culture dominance of domestic groups like AKB48 and Perfume. Regardless, T-ara have made well for themselves, ruling the Oricon Chart with “Bo Peep Bo Peep” in 2011 and watching their hit-studded debut album, Jewelry Box, sell over 100,000 copies last year. Whatever scarred the group in Seoul was barely noticed in Tokyo.

Jewelry Box was easily the best set of T-ara songs pressed to one disc, spinning like an ace hit compilation. Following the same trail of cash, T-ara continue to pillage their Korean discography here with their newest release, Treasure Box, which mixes old favorites and Japan-only songs in almost equal measure. Keeping to T-ara’s scatterbrained sound, the album shifts from two-stepping club hoppers to cutesy, winking ballads. It doesn’t make a lot of sense, but then again, nothing really does as long as T-ara does it. 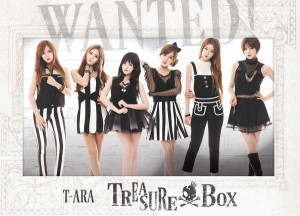 Although I usually adore T-ara’s wily sampling of pop concepts, it’s actually for this reason that Treasure Box lacks some luster. Its nine good to great dancepop songs are spaced around four ballads, which aside from the haunting “Day By Day,” are oversung, super-kawaii, and routinely boring forays into K-pop’s heap of generic ballads. Make it through them – or skip them entirely – and you’ve got a panicky pop album whose dancefloor sheen and bad gurl attitude hold up well enough from start to finish.

Darker and dirtier than the majority of T-ara’s catalog, these tracks take on a more relentless edge now that the idols have been scorned back in their home country. Jumpstarted with a hungry Japanese remake of “Wanna Play?” they waste no time running right back into “Sexy Love,” its synth whines and squawk still pointed. Then there’s the underrated “Bunny Style,” switching from prickly to cuddly in a single second. Also included is T-ara’s classic “Like The First Time,” one of K-pop’s most subversively sexual songs, which sounds as kinetic and breathy as ever. Surrounded by moody bangers, its electricity crackles more than before.

The new songs are on the mark, too. You can hear the desperation and danger build on “Target” only to be blown into shrapnel by the rapid-fire chorus. “Deja Vu,” and “Beautiful Sniper” have robo stomps that are jackhammer hard, while the crushing 808s and affectless Japanese vocals on remake “Bye Bye” make the girls’ once-teary words into now snotty send-offs. For a group whose actions after their scandal were equal parts indignant and apologetic, it’s only fitting.

Treasure Box, in all its cash-grab glory, actually manages to salvage itself. Its remakes are still indelible, and its newer tracks (ballads aside) fit well into an angsty electro sound, made all the more menacing given T-ara’s recent history. But as their only substantial release in over a year, Treasure Box isn’t the kind of bombastic comeback that T-ara badly need. Now that there’s no more Korean hits to translate, the group is backed into a corner; do they try to recoup their losses in Korea, or should they keep up their Japanese momentum? 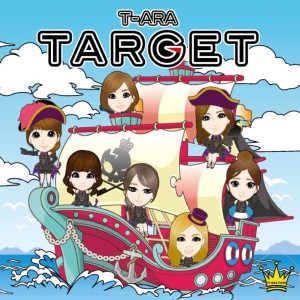 I’m sure that CCM and T-ara are well aware of that tightening bind, and I’m sure that fear was present when Treasure Box was being recorded. Now that these injured idols are trying to climb their way back to the top, they’ve unknowingly re-contextualized their own songs. Their hurried pleas for love, their outrage at those who abandon them, their distrust of dangerous, swift-talking men, and even their hammy attempts at appearing innocent all read in different, much more distressing ways than when they debuted.

I’m hoping that the ladies still left in T-ara can make sense of the mess they’ve inherited, and that’s not only because I want to hear them sing another smash. In a country as horribly gender-gapped Korea, there isn’t too much of a safety net for washed-up K-pop starlets, who have essentially counted on being career musicians. T-ara are still holding on to their accumulated success, but corporate manhandling and fickle K-pop fans can just as easily wrest it from their hands. Don’t they know it. 3.25/5