If KCON 2012 is any indication, KCON 2013 (next weekend, August 24-25)is looking to be a sure-fire hit. This year’s convention boasts several of the same panels and famous K-culture related personalities, such as Aimee Lee Lucas, and Ellen Kim, but don’t think KCON 2013 is just a repeat of last year. KCON, like most organized annual events, improves over each year. New panelists/special guests include Susan Kang “Soomp” of Soompi, Javabeans and Girlfriday of Dramabeans, Henry, Danny Im, and more.

While improved panels and special performances/guests are always great, what makes this KCON far better than the last is the insane line-up of artists there are this year. KCON 2012 really didn’t have A-list groups or a ton of musical variety. This year, however, we are graced with some of K-pop’s finest from a broad range of K-pop niches: 2AM, DJ Koo, Dynamic Duo, Exo, f(x), G-Dragon, TEEN TOP, and Yu Seung-woo.

But right when you think it can’t get better, this little piece of news comes out:

Hopefully this means a collaboration with GD may not just be a fantasy. To be honest, even if the dream collab doesn’t happen, just seeing a such a monumental name at KCON like Missy Elliott is amazing all by itself. 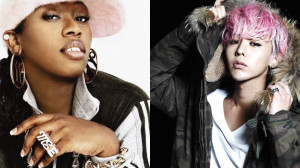 To those who are lucky enough to be attending (including several Seoulbeats writers) have a blast! It’s going to be incredible.