Following the lackluster critical reception of EXO’s previous efforts during the “Wolf” promotions, SM has been put in a position where they must really step up their game. For an entertainment company whose music videos are best known for excessive overuse of dancing in boxes, this is no small task. So what does SM do? They take their game to the next level by creating the ultimate in-a-box video. Except in the case of “Growl”, this actually is a good thing.

The music video for “Growl” is shot in one continuous take, which means that it forgoes the jumpy editing and face shots that usually characterize SM productions. While some fangirls may be vexed by the absence of close-up shots, this cinematic style is very clean and refocuses the viewer’s attention on the choreography. Since “Growl” doesn’t incorporate any cut footage, it must take place on only a single set, which is why I have taken to calling it the ultimate in-a-box video.

As Nicholas explained in his “Wolf” review, the primary advantage of an in-a-box music video is that the emphasis can be placed on the choreography and the individual appearances of group members. Yet “Growl” subverts this form by doing away with complicated dance moves and close-up shots in favor of the single-take cinematic style. Though I wouldn’t go so far as to say that the “Growl” music video is ironic commentary by SM, it almost feels as though there is a certain self-awareness at play here. Personally, I like it. One of the problems with SM’s music videos is that when you’ve seen one of them, you’ve basically seen them all, yet “Growl” is the exception to this rule. All things considered, the music video is very original and SM ought to be congratulated for stepping out of their comfort zone.

Unfortunately, the “Growl” music video has one glaring problem. It’s boring. Though it’s subtlety is a welcome respite from the hyperactive sensory deluge that is your average SM video, the fact remains that “Growl” is still mainly a bunch of attractive young men dancing in a box. While I am a firm believer in the principle that less is more, I think that this particular music video may have taken that concept a little bit too far. Though “Growl” remains a decent video that does its job well, it lacks the necessary impact to make it exceptional.

Then again, perhaps in the case of SM Entertainment, mediocrity isn’t necessarily such a bad thing. K-Pop is an extraordinarily competitive industry, which is why labels often use the music video component as a way to set their artists apart from the competition. For instance, no matter how good G-Dragon’s music may be, he would most likely never be as successful as he is without the help of his flashy videos. However, SM doesn’t need to be dependent on the music video to make their releases successful because of their strong marketing connections and intensely loyal fanbase. As a result, they have the unique luxury of being able to dedicate the majority of their time and resources towards producing the actual music. In this reviewer’s opinion, an excellent piece of music is enough to justify a mediocre video. 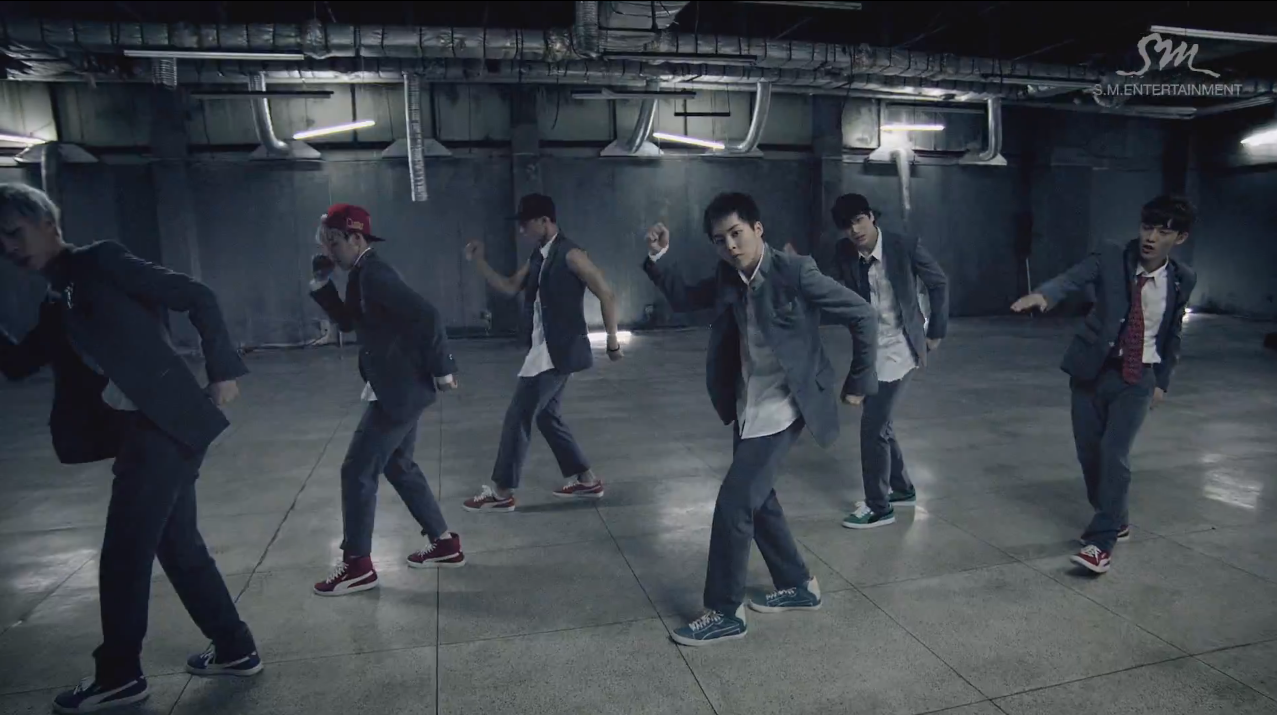 On that note, let’s take a moment to discuss the actual music. “Growl” is a relatively slow piece that has a very bright tone despite its use of a minor key. In many ways, it is reminiscent of the ultra-melodic electronic pop music of the 80’s combined with a more R&B beat and modern production techniques. In my opinion, the best quality of the song is the repeating four-tone motif that can be found being sung in the refrain and being played on synthesizers in the background. It really hooks the listener and helps to connect the different sections of the music together.

Interestingly, Exo remains stylistically consistent throughout the duration of “Growl”, which is a radically different composition style than they have employed in the past. With previous songs, Exo’s style has been characterized by the marriage of radically disparate elements. For instance, Mama draws from a variety of musical influences ranging from dubstep to gregorian chant, while Wolf shifts between a dizzying array of rhythms and keys. (As a student of music theory, I believe the technical term for this is the — throw everything at them but the kitchen sink — musical style.) Though Exo’s foray into stylistic consistency with “Growl” produced a solid piece of music, I really don’t want to see them make a habit out of it. Using a more eclectic style of composition forces Exo to be more creative and original, and though that sometimes hasn’t worked in their favor (quick, what’s the common name of Canus Lupis?), it really raises their potential. If they want to stop creating merely “good” music, then they have to take more risks and really push the boundaries.

So what’s the final verdict? With the “Growl” video, SM takes a step in the right direction by trying something slightly outside of their comfort zone. Though the final product was far from flawless, the originality of the concept still puts it a level above the average in-a-box production. Any shortcomings of the video are smoothed over by the quality of the song itself, though I’m not completely sure whether or not this is the right musical direction for Exo to be taking. Overall, though, I am very pleased with this release, and I believe that it raises the bar for SM Entertainment’s next efforts.