Spotlight: Cloudy With a Chance of Rain 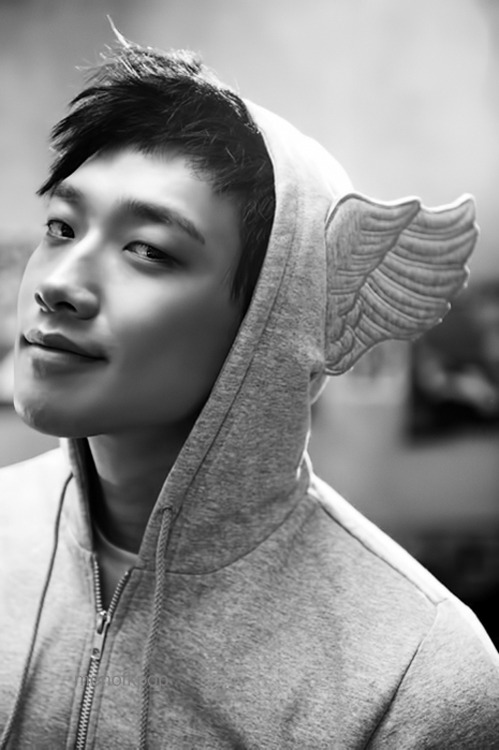 With the recent news of Rain to be discharged from the army on July 10th, we thought that right now — being the calm before the storm — would be a good time to give the low-down on the K-pop megastar, as an introduction for those who may have come into K-pop only after he had vacated the scene, or as a refresher for those who have been patiently awaiting his return.

Rain (real name: Jung Ji-hoon; he also goes by stage name 비 (Bi) — the Korean word for “rain”) is an R&B/pop artist who first started out in JYP Entertainment as a trainee in 2000, impressing JYP with his persistence and his talent, despite having initially been rejected several times due to his looks.

He debuted in 2002 with his first album, N001, promoting the title track “Bad Guy” off the album, as well as “Handshake.” In 2008, he also performed a tango-version of “Bad Guy” with actress Kim Sun-ah:

His second album, Rain2, was released in 2003, accompanied by comeback performances of “How To Avoid The Sun” as well as “You Already Knew.”

His third album, It’s Raining, was released in 2004, he heated things up with the title track “It’s Raining” and also promoted tracks “I Do” and “Nan.”

His fourth album, Rain’s World, was released in 2006, along with a repackage later that year. He drops into a battlefield with angel wings for “I’m Coming” (feat. Tablo), also promoting tracks “With U” and “In My Bed” off the album.

His fifth album, Rainism, was the first album released under his own label. Having left behind the JYP production team, Rain took the reins and became heavily involved with both the lyrics and the composition for his tracks, and his efforts paid off: the album sold extremely well, selling over 3 million copies worldwide, beating out the sales records for his previous albums. Different versions of the album were also released in Japan, China, and Southeast Asia.

From this album, he promoted the hot track “Rainism” as well as “Love Story (After Sept 12).” Government officials must have not been able to handle the heat, because the Commission of Youth Protection deemed the lyrical reference to his “magic stick” in “Rainism” inappropriate and rated the song 19+. Of course, Rain came out with a clean version of the song later on.

Not that telling Rain to tone down his sexy is ever really effective — he also performed the song after dancing in front of a pole (he beat you to it, After School!) at the 2008 Korea Film Awards.

Rain released his Japanese album, Eternal Rain, in 2008 under the label King Records. He already had an massive following in Japan prior to this album, having been the very first Korean artist to hold a concert at the Tokyo Dome (in 2007). In late 2008, he also launched a clothing line “Six to Five” that was later discontinued in 2010.

In 2009, he released a repackage of Rainism in Korea called Recollection, and in 2010, along with sporting a set of false eyelashes, he released mini-album Back to the Basic, promoting tracks “Love Song” (featuring some fierce body-waves) and “Hip Song” off the album. 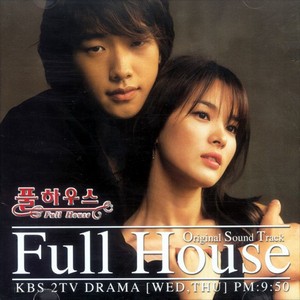 In addition to having a successful career as an idol artist, Rain has also had quite a few successes in the acting arena. His first major breakthrough was as the male lead starring opposite Gong Hyo-jin in the 2003 drama, Sang-doo! Let’s Go To School, for which he earned the KBS Best New Actor award for that year. In 2004, he played an even more iconic role as the male lead acting opposite Song Hye-kyo in the explosively popular Full House, and in 2005, he acted opposite Shin Min-ah in A Love To Kill.

Although it’s rare for the acting prowess of idols-gone-actors to live up to their starpower, Rain was one of the few that seemed to be able to fully throw aside his image to immerse himself in a role. His earnest portrayal of a young man in a mental ward in I’m a Cyborg, But That’s O.K. got him the Best New Actor Award at the 43rd Baeksang Awards in 2006. The whimsical film, directed by Park Chan-wook and co-starring actress Im Soo-jung, also went on to win the Alfred Bauer Prize at the 57th Berlin International Film Festival.

No doubt this exposure to an international stage was a factor in helping him catch the attention of Western filmmakers, as he landed a role in the Wachowski Brothers‘ Speed Racer in 2009, as well as the role of main character Raizo for Ninja Assassin in 2010, for which he won the Biggest Badass Award at the 2010 MTV Movie Awards. 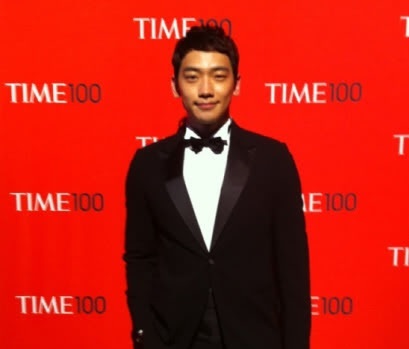 To add onto all of this, the highly-organized and enthusiastic voting (à la K-pop fashion) of his fans, the Clouds, landed his name in quite a few high-profile lists: in 2007 he was included in People Magazine‘s “Most Beautiful People” list, and in 2006 and 2011 he appeared in Time Magazine‘s “Time 100” (an annual list of the 100 most influential people in the world), in addition to consistently topping both the “Time 100” and Time‘s “Word’s Most Influential Person” online reader polls for multiple years.

This prompted comedian and fellow poll-contender Stephen Colbert to begin a public rivalry with Rain with a parody of the MV for “Ways to Avoid the Sun” (Colbert version here, bonus Yoo Jae-suk version here). This rivalry eventually culminated in Rain himself showing up after-hours on The Colbert Report for a dance-off:

All that being said, not everything about Rain’s promotions in the West was smooth sailing, despite Korean media outlets labeling him proudly as Korea’s “World Star.” His barely-conversational level of English severely hampered his ability to communicate with the general public, and created plenty of moments in Rain’s time in Hollywood that left us English-speakers cringing with second-hand embarrassment. Add onto that the fact that nuances in styles of humor (which is closely tied to language) also fail to translate easily across cultures:

His reputation also took a hit when several stops were canceled during his 2007 Rain’s Coming World Tour, some of them at the very last minute. In March of 2009, after a lengthy and drawn out process, the court passed a guilty verdict on a lawsuit drawn against Rain and JYPE for breach of contract with Honolulu promoter Click Entertainment after failing to refund the venue licensing fee for a canceled concert. The verdict mandated that Rain and JYPE would have to collectively shell over more than $8 million in damages. After an appeal filed by Rain and JYPE later in June of that year, Click Entertainment agreed to settle the case outside of court, although the amount of money they ended up agreeing upon was kept confidential.

This was only one of multiple lawsuits Rain had to deal with during this time period — along with having to deal with claims of copyright infringement on the name “Rain” on American soil (which the court eventually overturned), promoter Wellmade STAR M also filed a lawsuit against Rain which was dismissed in 2010, after it was argued that the promoter had failed to ensure appropriate stage preparations during the tour.

Setbacks aside, in these years, Rain had without a doubt accomplished the feat of being the first K-pop act that got himself major exposure in the West. While this is not to say that Rain was necessarily a household name, he was still the most well-known K-pop star among non-niche Western audiences up until the viral explosion of Psy‘s  “Gangnam Style” in late 2012. 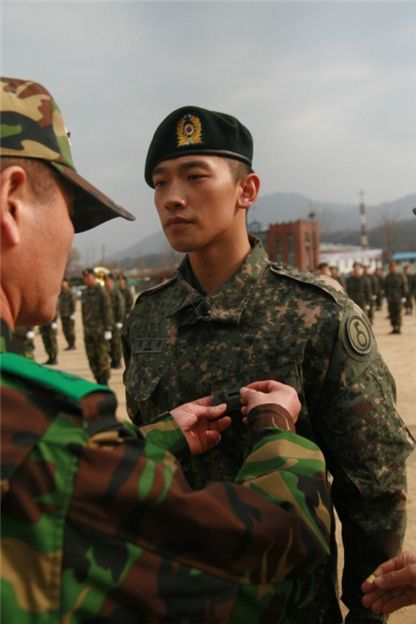 On October 11, 2011 (shortly after wrapping up filming for the movie R2B: Return to Base), Rain was conscripted for mandatory military service at the 306 Reserve Battalion in Uijeongbu, Gyonggi-do Province, and was originally designated to serve as an active-duty soldier. However, in March of 2012, he was transferred to the Defense Media Agency of the Ministry of National Defense in Yongsan-dong, Yongsan-gu, Seoul, to instead serve as an entertainment soldier and military ambassador.

Things seemed to go smoothly for a while, until New Year’s Day of 2013, when Dispatch dropped the bomb and released a set of paparazzi photos as evidence of a relationship budding between Rain and actress Kim Tae-hee. Furthermore, these photos showed Rain to be in uniform, and with his cap off, during these meetings. The scandal caused a massive uptick in netizen resentment against the preferential treatment of celebrity soldiers (who in addition to receiving nearly twice the amount of vacation days as normal soldiers, get to fulfill their duties behind-the-lines doing radio and performances).

While the topic of celebrity soldiers is a sensitive one and several whole pieces in itself, the bottom-line issue at hand for Rain — as far as the military was concerned — was not that he had taken so many leave days, but rather that he had met up with Kim Tae-hee in private on at least three separate occasions. Where there is some leniency in allowing entertainment soldiers outside the base for official duties to record or to perform, conducting private meetings while on duty is not allowed. This resulted in the minor punishment of a week-long probation for Rain, but the real damage — public resentment against him for not taking his military duty more seriously — had already been dealt. 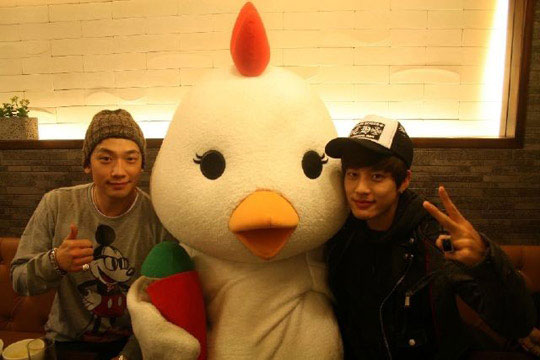 Rain must be counting his lucky stars, however, because in a twist of fate, another army scandal broke out this month, this time involving Se7en (who has been in a 10+ year long relationship with actress Park Han-byul) and Sangchul‘s midnight romp of “happy endings.” Putting aside the fact that Rain was among the group of soldiers that had been out drinking with the duo the night that the incident occurred, the “massage parlour” scandal made Rain’s secret meetings with his secret girlfriend — while not to be excused — seem like the weaker moral offense. Furthermore, while his colleagues continue to take on the brunt of public scrutiny, Rain will in the meantime be able to graduate from his military service with relative aplomb.

On May 28th, the CEO of Cube Entertainment (and former CEO of JYP Entertainment) Hong Seong-sung made the announcement that Rain has signed a contract with Cube Entertainment, so following his discharge from army in a few days, Rain will be resuming his career under a new label. Who knows what changes this may bring?

Thoughts, readers? Are you as excited as I am for Rain’s impending return to the K-pop scene?