2EYES Debuts with "Don't Mess With Me" 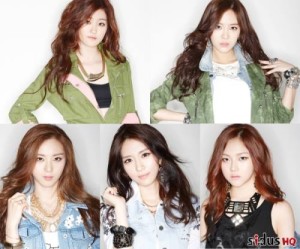 With the rise of the “tough girl” image, no longer can we expect only sexy or cute debuts from girl groups. Now it could be cute, sexy, tough or maybe, just maybe, that high-quality, unique concept that will blow everyone out of the water. Rookie group 2EYES appeared to have the makings of that fourth type: They’d proven their vocal chops through the That Winter, The Wind Blows OST, many of the members had already performed on TV, and SidusHQ got Prepix Haw to choreograph, meaning there would be serious choreography that is elusive with other girl groups. However, when their single album dropped, what we got was a disappointing MV and an album that sounded like a combination of other girl groups, making 2EYES anything but unique.

Their single “Don’t Mess With Me” works with both musical distortion and dissonance to convey the group’s edgy concept. The song’s message is literally “don’t mess with me,” and the music effects create an aggressive atmosphere with little room for the coyness or insecurity that tends to creep into girl groups’ songs. Often those effects make a song feel too busy, but for “Don’t Mess With Me” they don’t distract, though sound highly synthesized and electronic.

The trade-off is that the song ends up labored, like it’s had one too many tweaks. For a song that’s all about attitude and threatening to punch someone, it lacks energy and spontaneity, with each musical component predictably placed. It starts off promising with the rocking chords and pre-chorus that makes it seem like the song’s building up to an explosive chorus, but it never hits that peak. Instead, the chorus deflates, and the rest of the song repeats itself, throwing in an obligatory rap at the bridge. It’s not a bad song, but an unexciting one that won’t inspire many replays.

However, the real tragedy is that the music video screams carelessness and low budget, undermining any goodness in the song. Due to the complex dance, it makes sense to do a dance performance MV. What doesn’t make sense is the filming. There is so much traveling and level variation in the choreography that it does not lend itself to being cropped or seen through a shaky camera lens. It will always be a mystery why shaky cameras equal dark and edgy in K-pop, but this MV is a prime example of how that style can detract from a dance. The cuts to the member’s faces are quickly interspersed and don’t flow with the music, making them feel jarring and giving an overall impression of amateurish editing.

Everything else about the MV is boringly typical of the trendy tough girl image. They filmed in one dark room, with carefully placed distresses and graffiti on the walls. The members are styled in “hip hop” influenced clothing, and they also inexplicably have the exact same hair style, color and length. While it might seem superficial, hair is really important to give personality to individual members of a rookie group, especially if their clothing is the same. 2EYES’ styling not only fails to differentiate them from other similarly-concepted groups, but also fails to individualize the members. While the girls exhibit a fair amount of attitude, they don’t own their looks, making me question whether this concept suits their personalities or whether it suits the current trend.

The saving grace is the dance. The girls execute a complex, detailed dance with extreme precision, as is illustrated much better in Prepix Haw’s practice video. However, all the little details seem to restrain the girls a bit; they work hard at being sharp, but don’t have the chance to express the movements fully, echoing the main issue in the music.

Also included on the single album is “Bloody Luv” and “Irony.” “Bloody Luv” has a much bolder sound, exhibiting the let-loose characteristic that “Don’t Mess With Me” lacked. It’s not the most creatively composed however, and the beginning sounds so much like old-school 2NE1 that it’s hard to ignore. “Irony” is the best blend of all worlds, as the singing and music work together to deliver a solid song. Its best feature is that it shows off the girls’ deeper, husky voices right from the beginning, and they stay prominent throughout the song. The vocal variation — from the melodic chorus to the chanty, energizing bridge — gives the hint that these girls do have something different to offer when they work as a group. The music appropriately drops and builds with the vocals, creating tension and excitement when the other tracks didn’t.

All in all, 2EYES’ debut underwhelms; the image doesn’t quite fit, the song isn’t explosive enough and the MV seriously drags everything down. It’s frustrating to see a rookie group that has solid voices and strong dance skills be handed something lackluster. 2EYES might be a group to keep an eye on (pun intended), but for now they’re a 3/5.

What do you think, readers? Does 2EYES have potential, or are they more of the same?