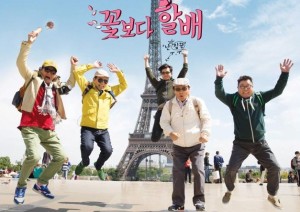 The following are the 5 Things that happened in K-pop last week that I think were a bit more special than the rest.  If you’re not up-to-date on your K-pop turn back now because spoilers most definitely will ensue.

The Infinite Challenge cast visited their ailing members Jung Hyung-don and Jung Jun-ha at the hospital at the beginning at this past week’s episode–good news is that they’re getting better, but it’ll take a while.  Subbing in this week for the Jungs were retired Korean basketball star Seo Jang-hoon and Defconn (aka Yoo Dae-joon). Seo Jang-hoon was hilarious when he was on Running Man and his appearance Infinite Challenge is no different–he’s like the funniest, most reluctant guest ever. Most guests who care too much for their image are soo unfunny, but not Seo Jang-hoon. Two questions: where did they get a jumpsuit that big and don’t they worry about their knees? Ouch.

then the victim is still around?  That’s the conclusion, or tactic, that the defense team of  Hye-sung and Kwan-woo use as a last ditch effort to try and save Su-ha from being put in jail for Min Joon-gook‘s murder on the K-drama I Hear Your Voice.  The whole episode I was thinking that Joon-gook cut off his own hand and framed Su-ha for his murder–the dude let himself get burned when he killed Hye-sung‘s mom, so what’s a left hand for getting revenge? Thank goodness this drama is letting our heroes be sort-of smart instead of always being outmaneuvered by the bad guy.  I Hear Your Voice has the right mix of the standard K-drama fare–amnesia, really?–and the unexpected to keep fans glued to their TV every Wednesday/Thursday. The ratings for the last episode were just shy of 20% and I’m betting they’ll just continue to rise.

On the latest episode of 1N2D, Uhm Tae-woong won the mission that made him King for a day and he unfortunately found out that being King isn’t all fame and glory. He felt left out of the fun when his ‘subjects’ all played a game where they caught water balloons in ahjumma pants to amuse him so he decided to play a round himself.  And his subjects decided to get some revenge for all he did to them during the day… and that’s why royalty couldn’t play with commoners. I’m pretty sure the rest of the cast would’ve been beheaded or drawn and quartered if they pulled that back in the Joseon era.

2. Falling in Love all over again with 2NE1

The girls of 2NE1 have finally made a come back with the release of their reggae inspired track “Falling in Love.” I LOVE the song–it’s a good summer jam.  I didn’t quite love the MV as much though–someone needed to take the gold spray can away from the set director and other than the scenes where her hair was straightened–Dara‘s blonde hair made her look so washed out. Making cameos in the MV were model/actor/GD bestie Lee Soo-hyuk and current silent, but intriguing hottie from Dating Agency: Cyrano, model/actor Hong Jong-hyun.

Monstar is just hitting all the right notes for me and is my current K-drama crack–can’t wait to watch the episode every week. There is only 4 episodes left as we saw major plot secrets revealed in last week’s episode 8–Seol-chan and Se-yi go to the movies, Sun-woo and Nana go play, Se-yi‘s mom comes home and sees ahjusshi, Sun-woo confesses to Se-yi and we finally find out what exactly Kyu-dong did to make his former friend Do-nam hate him with a cliffhanger that I hope doesn’t end up being what it looks like it will. Here’s the last bit of happiness that our lead couple had on their outing right before getting caught by Sun-woo, Nana and that irritating PD taking pictures.  I don’t know I think Seol-chan looked pretty cool playing guitar.  Anyone else cheering for Sun-woo and Nana as much as the lead couple?