TVXQ Brings the Heat to L.A. 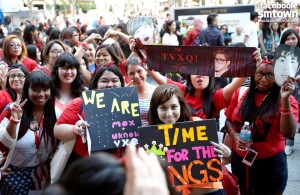 The hordes of people dressed in red may not have stood out that much in the Nokia Plaza compared to the cosplayers milling about for the weekend event Anime Expo 2013, but when the chants started, everyone couldn’t help but notice them. These fans fervently shouting “Dong Bang Shin Ki” came from across the continent to see duo TVXQ on July 5th, and I was fortunate enough to be among them.

When TVXQ mentioned the possibility of a U.S. stop on their “Catch Me” World Tour last year, I waited patiently for the official announcement. But when it came, I was nevertheless surprised. Besides the fact that a “world tour” generally means an Asia tour, TVXQ’s popularity in the U.S. isn’t as great as it is in Asia. They are one of the most senior groups in the current generation of idols, and when they debuted, Hallyu meant spreading throughout Asia alone, specifically Japan. As such, it makes sense that their fanbase is smaller in the U.S.

Many seats remained unfilled in the Nokia Theatre that night. I specifically recall two — nearly three — whole rows in the orchestra section, where I sat, being empty. That didn’t stop the red ocean though. Many fan groups organized different projects for Changmin and Yunho as a welcome for their first solo concert in the U.S., including light sticks, T-shirts, banners, and even a congratulatory wreath.

In their obviously-practiced-but-still-totally-adorable English, the duo greeted fans with tired but excited faces. Yunho shouted, “Wassup, L.A.?” Breathless from their first performances, Yunho told us how excited they were to be there for their first solo concert. Changmin was even quite the cassanova and said that he didn’t realize that California girls were so beautiful (I may have pretended that I was from California so that I was included). Aside from their small bits of rehearsed English, the duo mostly made use of a translator and spoke in Korean. The theme for the evening was the heat as Yunho promised that it would get hotter and hotter, and it definitely did — and I mean that literally and figuratively. 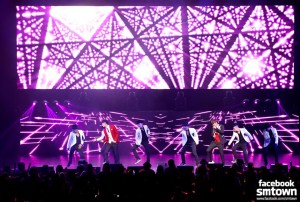 The performances were great. I had seen the duo last year at SM Town L.A., and while I have to admit that they were better then, they also flew in the day before for this performance, meaning they were obviously still jet-lagged. Yunho even admitted at the end that they weren’t in the best condition, but he also said that they still wanted to give more than 100%.

Perhaps it’s because they have so many years of experience under their belts, but Yunho and Changmin proved what seasoned professionals they were that night. From the beginning, both seemed tired, but they pushed through. They danced and sang excellently.

I even thought they were lip-syncing at one point because they sounded that good, but it’s TVXQ: 1) They would never lip-sync and 2) they always sound fantastic live. That’s what happens when you’ve been an idol for 10 years.

The setlist consisted mostly of songs off their last album Catch Me with, of course, their biggest singles across their career mixed in, including “Rising Sun,” “‘O’-Jung.Ban.Hap,” “Wrong Number,” “Mirotic,” and “Why (Keep Your Head Down).” My favorite performances were “Getaway” and “Humanoids,” mostly because I’d been dying to see them live and was not disappointed to see them. I have to say that seeing their OT5 songs performed as a duo still doesn’t feel right. Nevertheless, those performances were still amazing.

Despite the smaller stage (the duo often use a much larger T-stage) and venue, the duo performed like it was any other show. They asked fans to join in on the “We are T” chant with Yunho being cute and demonstrating the proper way to say it. They even ran up and down the aisles through the audience. Twice. (Yes, I touched Yunho, and it was wonderful.)

The highlight of the night though was at the end of the show. During “Unforgettable,” fans held up banners that said “We will always be there” in Korean. The banners were part of a fan project organized by two fan groups and had been passed out before the concert, and it was beautiful to see everyone holding them up for the duration of the song. The duo was definitely touched as Yunho said, “You guys are so amazing.” I may have shed a tear or two. 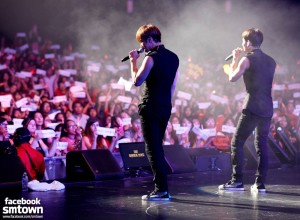 Probably one of the hardest things to watch of the show though was also at the end of the night, but during the encore. The two sang “Summer Dream,” and as with a normal encore, they joked around. The background dancers poured water on both of them, and it was really like a big party, perfect for the ending.

But just as Yunho prepared to run into the hands of a background dancer to boost him up into a flip, there was a stumble, and he fell with a loud slam, landing hard on his upper back. Even though he got up like it was no big deal and ran through the crowds again, it looked incredibly painful. That fall was more proof of how professional TVXQ really is.

The show ended on a high note though. The two took the time to thank fans multiple times and tell them how much they loved them. Yunho admitted that he was afraid of fans’ reactions but was happy that they had performed well and that everyone had fun. He then promised that they would come back again. Who knows if it will happen?

While I may sound a bit negative with the things I’ve pointed out, I really did enjoy the show. Sure, TVXQ’s performance in L.A. was not perfect, but it was still spectacular. Changmin and Yunho are solid performers, and they put on a great show despite their tiredness. That night, I screamed and sang and danced, just like any other fan, and it was pure fun. I only wish that I could relive it again and again.

How about you, readers? Did you get to attend? What did you think of the show?