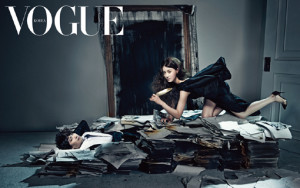 It’s officially summer and with the start of summer the slew of releases and news in the K-popiverse continues.  What also takes an upswing in summer is the amount of celebrity photo shoots and their ensuing magazine photo spreads. My fave pick of the week? Eom Ki-joon and Lee Si-young‘s dark and twisted spread for Vogue Korea promoting their movie Killer Toon which premiere’s on June 27th.