LEDApple Proves To Be Anything But "Bad Boys" 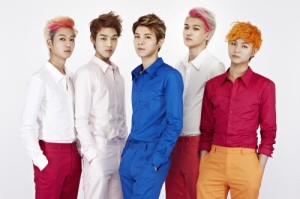 LEDApple is one of those offerings in Korean music that balances breadth and depth really well. They have a distinct sound that doesn’t jump from concept to concept, because well, they’re not really an idol group; but on the other hand, they don’t ingrain themselves in one idea like a lot of indie offerings tend to do. Their MVs on YouTube often contain the descriptor “pop-band-hybrid” (or something along those lines) and for once, that’s pretty accurate. LEDApple takes pop music and presents it in band form; in other words, a hybrid of styles, not just pop-rock. I may be stating the obvious, but I think it’s worth highlighting because it’s this hybrid that allows them to pursue pop music that places a greater emphasis on the instrumental side of things. Usually pop music draws attention towards the vocals and rock music’s complexities gravitate towards instrumentals (i.e. the band), whereas LEDApple tries to stick their feet in both pools concurrently. This works really well for LEDApple, because it allows for mainstream appeal while preserving the “fresh interpretations of rock music” concept that their foundations are in.

As for their newest EP, Bad Boys, it is just one more good album to add to their discography—and not much more than that. Bad Boys is very LEDApple from start to finish, with some lighthearted, vibrant pop in the beginning, then dabbling into some darker and heavier rock material by the end. Despite some significant shifts in tone and vibe, the “live band” performance angle keeps everything mostly unified in the end, without feeling like they created a pure idol album that jumps for the sake of jumping around.

First of all, the intro to this album is all sorts of epic. It’s really better heard than talked about. If I really had to describe it in a sentence, it would look like this: “The intro is 54 seconds of pure awesome.”

The first full track, “Bad Boys,” is LEDApple through and through. The song basically fits right into the Korean pop-rock genre that people would probably associate with CNBlue or FT Island but with a tad more of a trot and old school kind of sound. Despite the tacky MV, I do enjoy the song, and its easy to see why this song became the title track given LEDApple’s history and audience.

I’m actually a fan of Kang Ye-bin‘s feature in the song (as short as it is) because it serves a nice interlude in what is mostly a predictable song. Let’s be real here, the whole package sounds dated and far from novel. Nevertheless, if there was a way to execute unoriginal with finesse, this would be it. “Bad Boys” is an enjoyable listen and a great way to begin the album after the explosive intro.

The second song on the EP, ” 밥은 제때 먹는지 (Are You Eating Well?)” was actually a pre-release track that came in their ongoing “Music Note” series, wherein LEDApple releases a cover (0r in this case, an original track) on their YouTube channel each week. They cover everything from Maroon5, and Muse to Shinee and 2NE1, and have even made a rock version of SNSD‘s “Mr. Taxi.” The lead singers of LEDApple, Kyu-min (also raps) and Hanbyul (main vocalist), are really good at juggling versatile genres, and embodying the style of the original singers. It’s well worth your time to check those out.

As for “밥은 제때 먹는지,” the best descriptor would be “Classic Drama OST” because that’s really what it is. The “MV” also adds fuel to the generalization, because the antique filters and lighting fit the ambiance one would expect from such a track. As a result, this could be either a snooze-fest or a beautiful ballad depending on your tastes for such music. I personally enjoy my OSTs in small dosages, so I found the soothing and expressive nature of the song to be pleasing. This song is certainly a chance for the vocal prowess of LEDApple to take center stage, and Kyu-min and Hanbyul do a fantastic job of carrying the song without coming off too heavy. The faster tempo and crisp guitar prevent the song from falling into a lull, and is engaging from beginning to end. “밥은 제때 먹는지” is the song where LEDApple’s equal emphasis on vocals and instrumentals becomes really beneficial, because the background elements become the life of the song, transcending the rampant generic feel to the whole song.

“배반 (Betrayal)” starts to incorporate more rock elements, but with a mellower tempo. I like this song more than “Bad Boys,” because this song has a lot more to chew on than “Bad Boys.” I wouldn’t say it’s more complex than the other, but “배반 (Betrayal)”‘s restrained pizzaz helps the listener focus on the details of the song as opposed to trying to stumble through all the flashiness (not that flashiness is bad). Since the song is still vibrant in its restraint, it makes for really clean and easy listening.

And then we get to what is hands down the best song on the album, “난 널 첫사랑해 (You’re My First Love).” LEDApple channels a bit of Nell circa Slip Away—basically, it’s an incredible piece. The beginning is raw and minimalistic, carried by the vocals and piano alone. When the dissonant guitar kicks in, everything doesn’t explode, it beautifully intensifies without getting ahead of itself. The instrumentals are the beginning, middle, and end of this song, and when they soar, your heart soars and when they fall, you feel your heart fall as well. The vocals are throaty enough to be expressive without becoming annoying. I love the synergy between the rough vocals and echoing band and just how epic it all sounds when put together.

I really couldn’t have asked for more from LEDApple. It’s songs like “난 널 첫사랑해 (You’re My First Love)” that make the group worthy of carrying the “LED” from “Led Zeppelin” in their name.

After “난 널 첫사랑해 (You’re My First Love),” listening to “With Coffee” just doesn’t make sense. Going from epic rock to lounge music is one of the most jarring things you can do in an album. I think that this song could have been much better between “Are You Eating Well?” and “Betrayal,” because the musical style of “With Coffee” makes for a good transition between the two. Nevertheless, I’m actually a huge fan of this song. The balance between Zia and Hanbyul is nothing short of fantastic, because you can actually hear Hanbyul through all the parts. The vibe I get from the pairing is very much like Clazziquai‘s, though I actually think that Zia and Hanbyul make for a more lively pairing than Horan and Alex. It could just be the the song itself, but I’m really digging the pairing.  Too bad this song is horribly misplaced and a rather horrible way to end the album. It would be so much better if “You’re My First Love” was the last song. 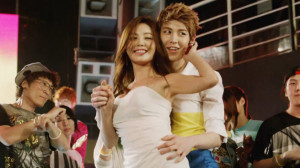 Overall, this mini-album has a difficult time of pulling itself together, despite the quality of each individual song. I think that LEDApple may have fared better if they had saved all of these songs for a full album release instead of jumping the gun and releasing the EP. Even though I mentioned that LEDApple’s style allows for some diverse genres within their albums, this particular EP unfortunately didn’t make the “band element” cohesion work as well as it could have. I think that the real issue is the lack of bulk and improper song placement. An EP is too short to make the various styles not look haphazard, and it didn’t help that the stunning intro’s gritty rock and the amazing “You’re My First Love” are on the opposite end of the spectrum to everything else in the album.

Honestly though, harping on minor continuity issues in the album is a small complaint in the large scheme of things. The bottom line is that LEDApple has done a fine job with Bad Boys. Since I’m one for strange taglines, it would have made a great corny pun if I mentioned that LEDApple were “Bad Boys to have released this trash they tried to call an album,” but I thankfully have zero basis for that. Instead, I leave you with an even worse line:

“LEDApple, with this album, you might as well change the title to Good Boys, because it was certainly more sweet than naughty.” 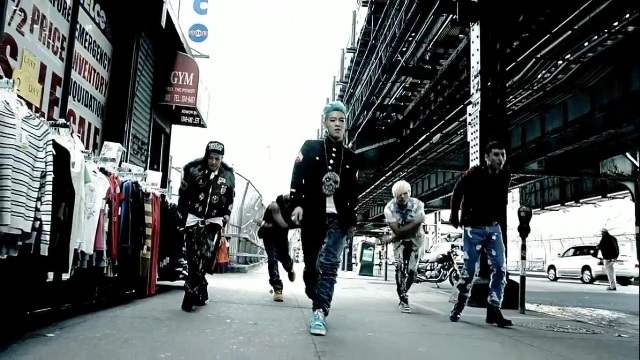 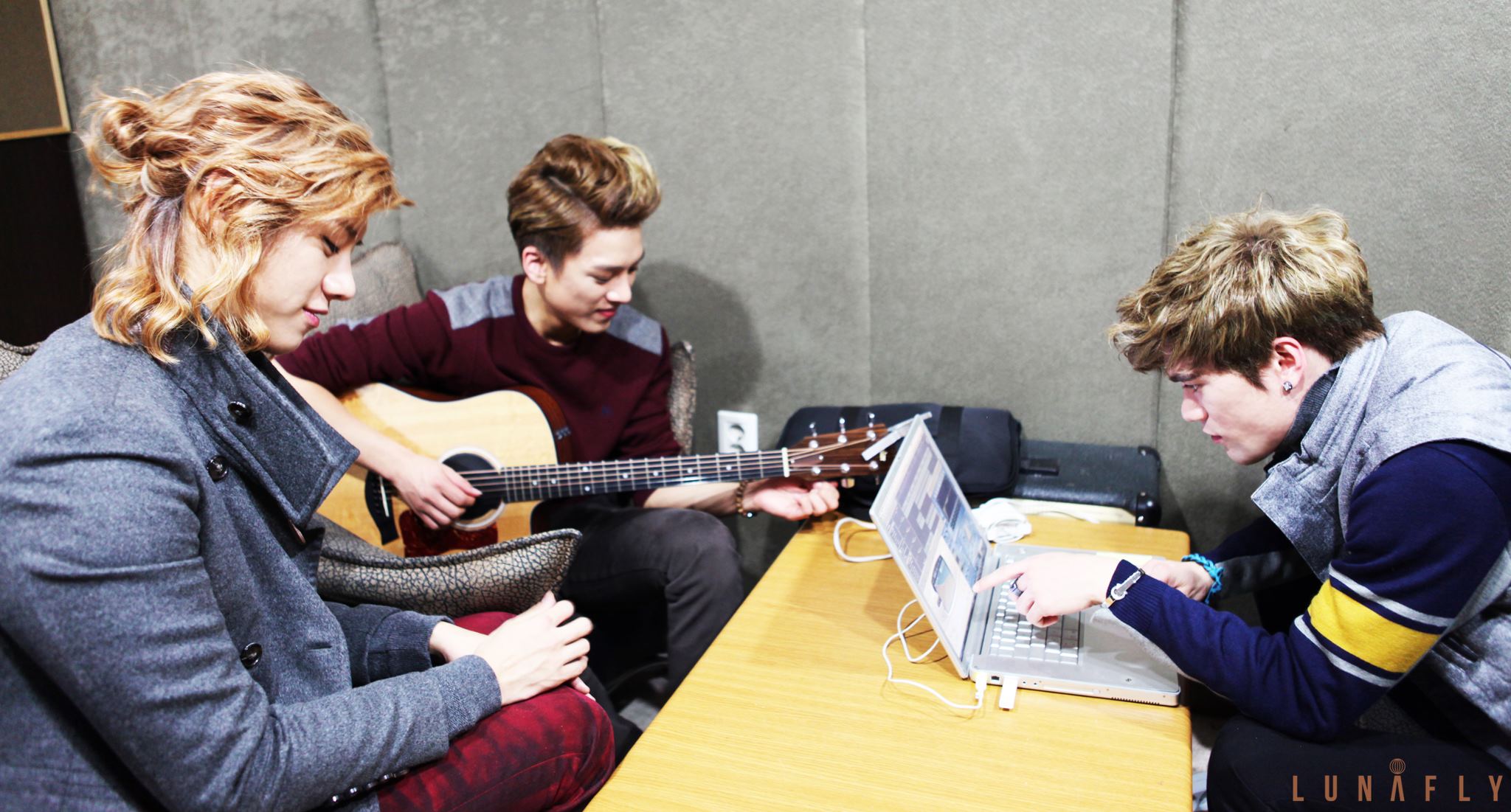