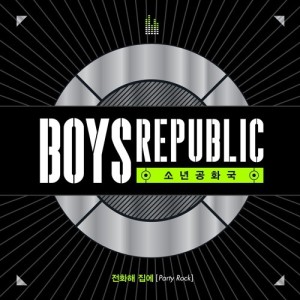 Universal Music Group is the largest music company in the world, and yet up until recently they had no foothold in K-pop besides their partnership with Cube Entertainment. After new group Boys Republic’s debut last week with their single album Party Rock, the company has started their first real foray into the industry.

And Universal Music Group did all of their research in preparing and training the quintet. They hired famous senior composer Park Geun-tae, who has worked with everyone from Baek Ji-young and Wheesung to ZE:A and Jay Park, to produce the group’s first album. They also brought on board as manager Jung Hae-ik, who helped in the production of some of the biggest names in the first generation of K-pop idols including H.O.T and g.o.d. Paired with the group’s training, the results of the company’s efforts are in.

First, let’s get the bad — what little there is — out of the way. From beginning to end, Boys Republic’s single “Party Rock” is drowning in autotune, which can easily turn off many listeners — as it did with me initially. Not only is it grating, but excessive autotune for a debut makes one question if the group can actually sing. Fortunately, their live performances prove that they can, but not everyone gives groups the chance to prove themselves by watching those so the choice to use it was not the best.

Autotune aside, this song rocks (pun intended). It has a nice dance-pop beat that’s light and fun. It’s a no-fuss, simple track with few bells and whistles. It uses the beat and pairs it with a beachy synth and guitar combination. Plus, it has such a catchy chorus with all of the “oohs.” With the lyrics about hitting on a girl at a party, it all works to create a great party song.

But if, like me, you are not one for autotune, perhaps you should start with the music video, which makes all of the difference. Last month, we had a roundtable about music videos that have dramatically changed our liking of a song, and this would be one of those cases.

The music video takes the dance-in-a-box premise quite literally. It opens with leader Wonjun sitting next to a girl at a party and flirting with her, the only moment that actually follows the lyrics. She coolly rebuffs him though.

In her boredom, the girl sees a random corded phone (that apparently still exists) hanging over the arm of the couch. She follows the extremely long cord into a cardboard box of styrofoam and confetti. Intrigued, she empties it and crawls in, only to find herself in another room, as all the boxes are apparently portals into other rooms. 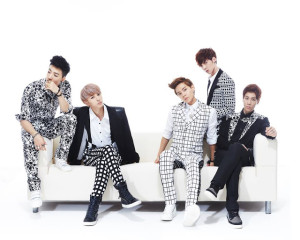 The rest of the music video follows her getting lost in the labyrinth of cardboard boxes. It seems that the members though know what they do as they seal her up in a box at one point so that she can’t get out. Later they crawl in and move the party into the box. Mad that they trapped her, the girl ends the video by crushing the box they entered. A bit dramatic, but it’s clearly all in fun.

The styling is simple, nothing distracting or too conceptualized in style or color palette. They wear typical party garb: jackets, caps, skinny jeans and sneakers. Even when they wear their monochrome suits, they are in a pink room with teal accents so it all balances out. It’s actually quite refreshing how simple everything is. The party seems to be at some old warehouse or garage that’s just been decorated for a party. Even the ever-present car in the back isn’t flashy. The rooms inside of the cardboard boxes are probably the most colorful scenes.

While it all reminds me of my childhood dream to go on Disney Channel’s TV series Out of the Box, my favorite part of the music video though is the choreography. The dance is incredibly energetic, involving lots of jumping, formation changes, and quick footwork. I particularly enjoy their use of contagions.

With five members only and their constant formation changes, they all have to time and execute their moves perfectly, and clearly their training has done them well because the entirety of the dance, contagions included, is sharp and clean. The dance version, which was just released this past week on June 18, showcases their skills though perhaps with a few too many close-ups.

If their single still hasn’t sold you, then maybe the other track on their single album will. “Special Girl” is a hip-hop inspired song that has an old school beat and a great guitar line. Similar to “Party Rock,” it’s a rather clean and simple track but still catchy. I actually liked it more than the single at first, probably because it is free of autotune. It makes for a great complement to “Party Rock” though because it is on the slower side but still sticks to the same upbeat lightness, rounding out the single album on a high note.

Boys Republic is off to a great start with their debut. They are clearly talented singers, dancers and performers, and their music definitely highlights that. Universal Music Group clearly knows what they are doing despite this being their entrance into K-pop. Now, they just needs to ditch the excessive autotune.

What do you think of their debut, readers?