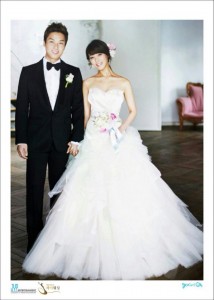 Perhaps the biggest story of this week in K-pop is the forthcoming marriage of Wonder Girls‘ leader Sun-ye to her boyfriend of over a year, James Park, on Saturday, January 26th at the Lotte Hotel in Seoul.  Her bestie, 2AM‘s JoKwon will officiate and JYP will offer the congratulatory song at the wedding that will definitely be one of the K-pop events of the year.  On the 22nd, JYPE released a couple of Sun-ye’s pictures from her wedding photo shoot and Sun-ye looked just radiant in them.  Although Sun-ye’s nuptials and uncertain future after it has definitely thrown a wrench in the destiny of the Wonder Girls, Wikipedia has already listed her as a former member, no one who is a fan and knows of her tragic past could not be happy for Sun-ye. (JYPE, Star News)