Yes, I know this might be coming a little late, but it’s been worthwhile waiting it out. Given the multitude of ways in which things could’ve transpired, and how being early could’ve led to premature conclusions, this post has been delayed, till now.

K-pop has repeatedly tried its hand at breaking into the West, and without much success. So, why the sudden fixation on T-ara and their flighty news of a collaboration with Chris Brown?

One possible, albeit repetitive reason: This collaboration appears to be more than meets the eye, and is apparently something of substance.

But hey, don’t we all know how typical “K-pop meets West” ventures go? The tried and true path: big name gets parachuted into new K-pop song, expectations go supernova, hopes or plans do not exactly materialise, and everything returns to the status quo.

What’s different this time then? The interesting thing about this partnership is how ‘music’ doesn’t factor in as the main point of the project. Instead, it seems as if Chris Brown (or CCM) seems to be selling the whole idea of one celeb getting to know another celeb, and thus one gets to ride on the tailcoats of the other.

It’s safe for us to presume that Chris Brown has probably seen how big K-pop is/can get (think Gangnam Style), and how T-ara could do with some international exposure; this pairing would only seem like a natural partnership.

Ah, but what about the magical ingredient called ‘compatibility’? After all, we’ve seen too many R&B artistes/hip-hop rappers brandish their so-called collaborations, only to have their contributions amount to no more than an awkward rap introduction, or randomly inserted break.

The only one who’s appeared to have done far more than the above would be Teddy Riley, but unfortunately the consensus was that while Riley was good in his day, it seems that the zeitgeist has passed.

Off the cuff, it might seem that this T-ara N4/Chris Brown pairing would be just as odd as the ones that have come before them, but a closer look reveals a fair few similarities shared between the individual parties.

1) They’ve had big hits before (while he was running it, and while the girls were pawing their way through)

2) They’ve been embroiled in major public relation scandals (he of the trigger happy hands, and the girls with their passive aggressive tweeting)

3) They’re still in the business, but they struggle at times with public perceptions of them.

Given all the similarities, and the blatant name-dropping that’s been happening so far, it’s very probable that the meet-ups could’ve been more of the PR sort, than the music type, as many would’ve hoped for. 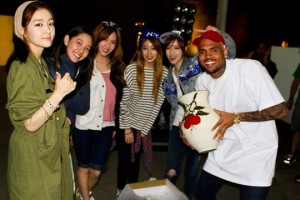 Take for instance the first news article about their meeting, which to the trained eye could’ve been an exercise in buzz words and cover-ups. From the talk of 300 screaming fans to the 18 bodyguards and a limousine, the whole thing does read of excessive star treatment, representing T-ara as far bigger celebrities than their actual statuses suggest.

Moreover, Core Contents Media isn’t exactly new to the idea of “hot air”. Remember the news on GangKiz having turned down a major advertising contract even before their debut? Seeing as how the group ended up as a flop, it wouldn’t be far-fetched to imagine that the advertising contract never existed in the first place.

With all the bits that’ve been circling so far, T-ara N4 and Chris Brown’s shebang has appeared to be equal parts legit business meeting and equal parts an embarrassing show of what-not-to do-when-trying-to-impress-potential-work-partners. The good would include the usual fan meetings, gift exchanges and discussions of future plans (well, at least that’s what’s out there). 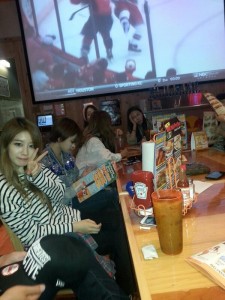 What was probably a lot more farcical: the meal with Chris Brown and his group at the place of all places… Hooters. Okay — maybe the restaurant chain does decent American food, and maybe it was shorthand for the American experience, but really? There are far better places to take future working partners to, and all I can think of is how Chris Brown was really slipshod with his gestures of hospitality, or that he was being snarky about the whole affair.

Still, with news of a music video set visit and discussions on collaborations, the whole thing might move beyond the point of farcical public relations attempt, to become a reasonably legit musical collaboration. Fingers crossed.

One last thing: given how Chris Brown said he knew T-ara’s Dani (the main power broker in this cultural exchange) since she was in elementary school, the age difference (he’s 24, she’s 15) meant either some fibbing was in order or that he’d tried some stealing from the cradle. Then again, I could be overthinking this.