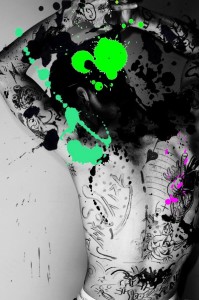 Soloists have been slowly increasing in number over the recent months in K-pop, and we are set to have a new addition to this group from none other than SM Entertainment, who made the announcement on Twitter today.

My (and probably a lot of people’s) first thoughts upon hearing this news was : “JINO!!!!!” But unless some something happened between the end of SM the Ballad promotions and now, I doubt that he’s the one here posing shirtless. They’re definitely emphasising the “male” part in these teasers with the naked torso, though the cartoonish effects and body art add a youthful appeal as well.

But the most frustrating thing about this piece of news is that SM have intentionally obscured the face of our new male soloist, so we have no idea who he is. Is it a new artist, or has SM been listening on the Seoulbeats staff’s conversations and are greenlighting a solo outing for an already-debuted idol? There are apparently rumours of a Henry solo album, but is this him?