In light of the new song from Psy,  it feels rather appropriate to discuss what it means to be “original” in music, seeing that “Gentleman” is causing polarizing responses due to its “Gangnam Style Part 2” nature. It’s not uncommon for K-Pop idols to be accused of having the same song as some other artist, or vice versa. It should be duly noted though that such claims lead to next to no fanfare beyond the bout of fan-war commonplace among internet denizens. When it comes to idols copying themselves, as in the case of Psy and more famously, Super Junior, the reactions are much more mixed in intensity. This, however, leads to the basis for more serious arguments against the validity of K-pop as a genre, whose platform rests on the idea that K-pop is just a flamboyant form of borrowed and repetitious pop music, complete with bright lights, plastic doll visuals, and of course, understated sensuality.

For this accusation to be true, it is one of deep dark insecurities that pretty much every K-pop fan has (myself included!).  There are two general ways that (usually foreign) fans deal with this issue: one, they deny that they listen to the mainstream music and focus on the supposed “true artists” (usually the examples are Yoon Mi Rae, Big Bang, 2NE1, TVXQ/JYJ, LeeHi, etc.) or two, they degrade the genre as a whole by asserting that they’re only there for the entertainment value and pretty faces provided by “Dr. Kim,” and that they listen to “real” western music the rest of the time (the genre most commonly cited is “Rock and Alternative.”)

Sure, one could live by that disposition and be absolutely fine, but why should we relegate something that earns billions of won a year and has dozens of people devoting their lives to it to nothing more than a distraction? This especially is disconcerting as there are many consumers who find the product meaningful enough that they would spend some fraction of their time and/or money devoted to it. Why should any one artist, or any one genre, in this case, K-pop, be inferior to another if they all have followers?  Why should we downplay someone else’s taste?  Though we can review artists’s material in the context of musical theory, or critique them under a particular set of rules, assumptions, and personal preferences, music fundamentally cannot be given an arbitrary label of superiority or inferiority.

Music, I would like to argue, has at its core one and only one goal—recognition. Often times, to gain that recognition, songs actually have to sound nearly the same. To understand this, we first need to look at what musical recognition is on a technical level. For that, here’s a video that can explain the technicalities much better than I (start at 6:21 if you really don’t want to watch the whole thing).

Basically, what Michael is trying to say is that humans, in general, tend to gravitate towards the same kinds of songs and lyrics. The human ear recognizes a limited set of pleasing sounds, common cords, and melodic structures, and that is what people like as a whole. Too much “experimentation” loses audiences, who then promptly return to what is familiar. Take SNSD’s “I Got A Boy,” where we have a conglomeration of styles that completely sends the “song formula” out the window, and what do we get? We get people that don’t really like the song. I’m not insinuating that we should write the same song over and over, but there is definitely some sense of familiarity that we seek. If it’s not there, we don’t listen. 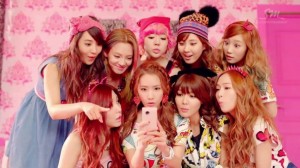 On the flip-side, groups also seem to receive backlash for not sounding “original,” or “unique” enough, which is actually ironic given the above. First of all, no song is truly unique, but we’ll ignore that here. Admittedly, a lot of K-pop finds its roots in European styles, and it’s not surprising that well, K-pop sounds somewhat European. Is that necessarily wrong? I don’t think so. Korean Pop will always be Korean so long as it’s lyrics are in Korean, it’s sung by Koreans, and is sold as Korean. The roots are irrelevant, because the central audience is Korean, and what they appreciate is undoubtedly Korean when the three conditions are met. More often than not, there is some Korean stylistic element that makes a song Korean pop as opposed to a song for say, the Backstreet Boys. So the real inquiry should be, “Where is the line drawn between ‘boring’ and ‘familiar?’”

It’s nearly impossible to claim to have the real answer to this question as it really comes down to personal preference and we’re often huge hypocrites when it comes to our objective reasoning for those preferences. People find songs like “Tonight” by Big Bang and “Mirotic” by TVXQ agreeable, but they too fall victim to many of the same formulas. On the other hand, songs like “Bonamana,” by Super Junior gets thrown into the “Sorry Sorry Part X,” sort of category and receive much more backlash.

Why does this occur? It really comes down to knowing how to succeed at using the formula — pop music in general is really all about maximizing it. Give people the familiarity they need, and then layer elements that will force people to take note of the song beyond the formulaic structure. If you produce a song that reminds them of something else through immediate association, the intended audience is not going to consume it to the same extent. Super Junior’s “Bonamana” and other songs succumb to this problem.

Obviously, I can’t guarantee this overall method will work, because of course, there is no real formula for music. Regardless, I would like to let the “repetition” thrive in K-pop as long as the songs sound good. K-pop is what it is, and we can’t let our high-browed selves put it down because of its juvenile reputation — it IS as much “real music” as Tchaikovsky’s “Seranade for Strings” is.  Personally, I (and odds are, others as well) continue to consume K-pop because I enjoy the familiarity and pleasing nature of the genre: the catchy beats, the addictive hooks, the visuals, and everything else in all of its saccharine glory.

And yes, that requires that songs kind of sound the same.