The Best (or Worst) Cases of Wannabe K-pop 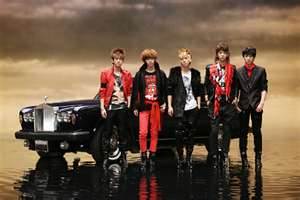 Let’s face it: even though K-pop may not be known for its mindblowing originality, it does have this incredibly catchy quality that leaves people wanting more. Many K-pop fans still remember the fascination they had felt after watching their first music video (mine was “Ring Ding Dong” by SHINee), and most of them will tell you that they never looked back after that.

With K-pop now taking most of Asia and parts of North America and Europe by storm, it’s no surprise that there have been a handful of “wannabe” K-pop songs or music videos popping up all around the world. Although some hardcore fans can get very worked up about their favorite idols’ songs being copied by other lesser-known artists, there are definitely some really amusing versions of “Sorry Sorry” out there. Here are my top five:

Sharp-eyed netizens found this Spanish version of T.O.P‘s “Turn It Up” a few months ago and many fangirls were enraged at the blatant plagiarism present in the video. Later, however, ALABAMA, the rapper, released a statement saying that his video was simply a cover of T.O.P’s more famous version. He released credits to YG Entertainment on his YouTube page later after fangirls began leaving him death threats, but the damage was already done. ALABAMA has probably learned his lesson — don’t redo K-pop songs and forget to credit the company and artist — and now we get to listen to this lamer Spanish version of “Turn It Up.”

While YG decided not to take action against ALABAMA for his version of “Turn It Up” since it was just a cover, SM Entertainment is not as thrilled with Moroccan boy band Tiraline’s version of “Bonamana,” which they titled “Matal Maghribi.” The song was released through Tiraline’s MySpace page in February, and angry fans of Super Junior quickly turned the song into a hot issue. SM has announced their intentions to sue the group for publishing rights to the song, and it doesn’t look great for Tiraline as they had obviously plagiarized the entire song and not just a section. Even though they didn’t have choreography for this song, it’s pretty obvious that the band had stolen the song from SM.

SM Entertainment seems to suffer from more plagiarism cases of their songs than the rest of the companies, simply because some of the songs they have released are addictively catchy. Here, a female Serbian artist named Jelena Karleusa released a rearranged version of SHINee’s “Lucifer.” The song was available on her official homepage for download, which SM deemed harmful to the original composer. They took legal action against Miss Karleusa, and it doesn’t seem like she has been keen on taking any more K-pop songs since. I’m sure that SHINee wasn’t too amused with this intensified version of “Lucifer.”


Jorge Blanco, a star on the Spanish Disney Channel, released “Voy por ti” earlier this year. The intro to the song is immediately recognizable as the famous intro to “Sorry Sorry,” and Super Junior’s fans quickly caught on. Even though the rest of the song is somewhat different from the original, the intro is present throughout the entire song and is used as a catchy hook. It doesn’t look like SM, if they know about this, is going to take action against the singer though — it is less likely that they’ll win this case just because Jorge Blanco only used the intro. Still, it’s unlikely that the composer of the song came up with that catchy hook all by themselves.

Word of advice: if you plan on stealing a K-pop song, you probably should not keep the same title. Andrea Bucaram, a singer from Ecuador, was under fire from MBLAQ fans about a year ago for releasing a song titled “Oh Yeah,” which sounded suspiciously similar to this version. She tried to salvage the situation later by posting on her Twitter that her version of “Oh Yeah” was simply a cover and stated that she was a huge fan of K-pop and MBLAQ, but after Andrea Bucaram answered a few crucial questions about MBLAQ wrong during an interview, it was easy to see that this was straight up plagiarism. As much as I love MBLAQ’s trendy Spanish feel to their music, I don’t wish for Spanish singers to take their music and pass it off as their own.

In the world of K-pop, it frequently plagiarizes and is frequently plagiarized. As music gets more and more complicated, it’s hard to tell who came up with which musical concept first. It’s definitely going to get harder for companies to sue for plagiarism later on as people stealing their music get smarter about rearranging, but with these five not-so-great wannabe versions of K-pop, it’s easy to see that they have a long way to go before SM will stop suing their butts off.