Side B: A Class with miss A 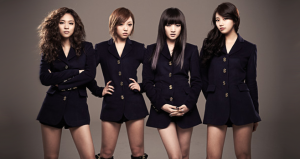 miss A are the second girl group to debut under JYP Entertainment, and have the pedigree of The Wonder Girls behind them. Yet even before their debut, miss A have strived to create a sound unique from their retro-inspired sister group, aiming instead for upbeat, edgy dance tracks. The four members — Fei, Jia, Min, and Suzy — share a wealth of international experience in addition to their extensive vocal and dance training. Fei and Jia are originally from China and Min spent time training in New York City. Thus, while most K-pop groups have learned Japanese and English for international debut, miss A have instead looked to Chinese-speaking countries. Thus far, their Chinese discography includes a 2011 album with Chinese covers of their 4 biggest singles (“Bad Girl Good Girl” “Breathe” “Love Again” and “Goodbye Baby”) and a 2012 EP with a Chinese cover of “Touch”. Both have debuted near the top of the charts. Their Korean releases have seen similar success, placing in the Top 5 of the Korean Hot 100 with their last two singles “Touch” and “I Don’t Need a Man.” 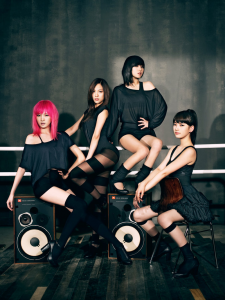 miss A has always been a group known for their dance skills, and it’s no surprise when you consider the group’s early activities. In 2009, members Fei and Jia performed on Chinese variety shows as “JYP Sisters” or “Chinese Wonder Girls”. Eventually, after the departures of 3 members, JYP Sisters changed their name to miss A, added members Suzy and Min, and prepared for a South Korean debut. Most of both the A-sides and B-sides of miss A are high-energy dance numbers that show off the group’s collective skill.

I’ll freely admit I have a bias for such fast-paced dance numbers, but I loved 2010’s track “Looking at Each Other” off their debut single Bad But Good. The lyrics feature the members stalking an unnamed guy and evoke the reckless single-mindedness of a cat hunting prey. Loss of control becomes the main theme of the chorus, as the vocals and instrumental track fight each other for control. I wouldn’t like this effect if it were overused, but here the rhythmic discordance fully embraces the song’s mood. Despite an unrelenting Eastern-European backing, the track manages to still be dynamic, raising it a step above the average club dance track. By the way, the track is also called “Meet Again” for those of you looking to add it to your collections.

All of the members of miss A also have considerable vocal skill, but were often criticized when performing their debut because of the breathiness of their vocals. Thus for the 2nd release, JYP revamped the group’s sound to a synth-laden electro-pop style. While “Breathe” became the promoted single, the opener and titular track of 2010’s Step Up is one of my favorite miss A tracks of all time. Many opening tracks serve only to set the mood of the EP, but “Step Up” functions as a peppy, danceable hit that could have easily been a single in its own right. My favorite part of the song is the bridge which uses a call-and-response succession, with both parts separately building toward the chorus. Overall, the song is also a perfect addition for concert performances, as it has a clap-able rhythm, a simple chorus, and plenty of vocal directions to get fans energetic and engaged. It’s hard to listen to the song and not sing along with “Miss A-eh-eh-eh” in the chorus.

Thus far, miss A has only released one album. A Class, which came out in July 2011 contained mostly A and B-sides from their first three singles. However, a few new tracks were also featured on the album, including the amazing dance hit “Mr Johnny.” Suzy does an excellent job on the verses, quietly describing her fascination with the titular man, before the music swells for the bridge and chorus. While miss A’s raps can be hit or miss, I think Jia’s all-English rap helped this track stand out. The rap is fast and precise, and is memorably distinct from the rest of the track.

In early 2012, miss A released their first EP Touch, which showcased their signature dance sound blended with dubstep, R&B and Brit-pop influences. “No Mercy” channels artists like Duffy and Lily Allen to create a stellar break-up track. Despite her few lines, Min overflows with emotion and passion during the chorus. The instrumental track also shows a strong percussive backing, infusing both drums and handclaps that contrast well with the fluid vocals.

While “No Mercy” shows genre expansion, “Rock N Rule” shows mastery of the dance core that defines miss A. With an English hook straight off the Disney Channel (“Let’s rule this world”), the track is upbeat and refreshingly simple. It’s a song about living in the moment, and it accomplishes this well with the composition. In five years, we’ll hear this track and know it’s from 2012 because of the dubstep break and repetition the phrase ‘partyrock’. (For those of you not convinced the producers heard LMFAO, just listen to the opening bars of “Lips”.) It’s an addictive little track delivering a positive message and a nice departure from the rest of Touch.

There wasn’t a weak track on the October 2012 EP Independent Women Part III, but even on a release packed with crowd pleasers, “Madness” stood out for its haunting subtlety. Jia once again excels vocally, particularly in her rhythmic delivery of “I’m making a fool of myself”. The song swells slowly, then overflows with beautiful vocalizations from Fei. 2PM’s Taecyeon contributes a long rap to this track. While it’s nice to hear a male voice, it doesn’t add much to the track overall. Still, the R&B style track gives the girls a chance to show off their vocal range, and it’s one of my favorites from the compilation.

miss A have been quiet since they finished promotional activities for Independent Woman, Part III. Suzy is currently working on filming a new TV show, Gu Family Book set to debut this spring. There are as-yet-unconfirmed rumors that miss A will be making a comeback once her schedule clears. Given their rich discography, it will be exciting to see what the group produces next.

I hope you’ve enjoyed this round of Side B. Feel free to make additional recommendations in the comments below!