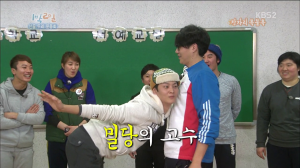 A new lunar year brought along a lot of new things in the K-popiverse from the passing of Ulala Session‘s Lim Yoon-taek, teasers of SHINee‘s long awaited Korean comeback and the debut of the much anticipated K-dramas IRIS 2 and That Winter, The Wind Blows.

The following are the top 5 Things that happened in K-pop last week that I think were just a bit better than the rest.  If you’re not up-to-date with your K-pop turn back now because spoilers most definitely will ensue.

5. Loving U Another Way

It was the “With Producers” special on Yoo Hee-yeol’s Sketchbook with producers like Brave Borthers and Shinsadong Tiger appearing on the show with acts they’ve written songs for. Duble Kick came along with DMTN and they performed a namja R’n’B version of SISTAR‘s “Loving U” which they wrote.

4. Beauty Comes at a Price

And in most cases that price is pain.  The cast of Qualifications of Men explored the various methods of hair removal that most women use and found to their dismay that being beautiful isn’t easy.  Sorry, but no pity here–well, not much.

It was another Infinity Challenge where some of the cast’s friends joined in on the fun including MC Kim Jae-dong, singer Yoon Jong-shin and actor Kwon Oh-joong. What happened next was some bad fashion choices straight out of a 70’s cop show and a game where they really had to use their heads to win.

The boys of C. N. Blue made an appearance on tvN‘s mobile variety show, Taxi, after their win on the February 1st episode of Music Bank.  Since all four members were on the show and that necessitated the use of the “jumbo taxi,” they mixed things up a bit by having the boys drive in a taxi to meet the MCs. The boys must have been celebrating the high of their win because they were having a grand time on their drive playing around, jamming to their songs and doing a little noraebang.

It was part 2 of Olympic medalists Jang Mi-ran, Choi Byeong-chul and Hwang Kyeong-sun‘s visit to 1N2D. While Sung Si-kyung and Jang Mi-ran made dinner, the rest of the cast and guests killed some time by testing their skills against each other. An Olympic athlete isn’t someone to mess with and that’s a lesson that the men of 1N2D definitely learned.