Some of you might recall the old 1980s anime, Urusei Yatsura, a show about a regular school boy, Ataru Moroboshi, and Lum, an alien to whom he accidentally proposes. The popular show ran until the late ’80s and received positive reception in and out of Japan. The show also made use of pop music for its opening and closing credits. One song, “Lum no Love Song,” was recently covered by Orange Caramel.

In keeping with the anime, Orange Caramel cosplays as the anime’s heroine, Lum, albeit in family friendly attire. As with the original video, shooting stars in the anime are readapted with stars falling from the ceiling, and with the girls sitting on a half-moon. However, the similarities end there. 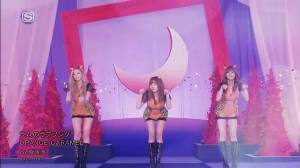 Orange Caramel’s rendition comes off as rather nonsensical; the trio stare randomly at falling balls of light and fiddle with bulbs. While Urusei Yatsura‘s version had a male protagonist to play against, Raina, Lizzy and Nana had no one to proclaim their love to. We do see the girls by their telephones, or with phones in hand, anticipating calls, but this doesn’t connect particularly with the lyrics they’re singing.

Understandably, many music videos go without love interests, but in this case, a missing male character is accentuated by the lyrics, which are pointedly directed at one. And, it’s clear that those aren’t nearly as blinding as strobe lights but it’s confounding, how they add on to the MV’s plot if it can be considered one. What do they imply, and what’s their purpose? The girls’ frustrations with every blink, perhaps? It hasn’t been my intention to dwell on such minute details but this says a lot about the clip, hey?

Halfway through the promotional video, a musical interlude takes place. It sounds rather like elevator music, and while it goes on, we witness the girls sharing screen time with their little light bulbs and yeah, that’s just it. A seemingly stale scene leads to another —  Orange Caramel stay frozen under their little sky of a MV set ceiling, as tiny stars fall. The rest of the video features them admiring with shock, the fascinating balls of light.

Appreciating the video as a whole, the brutal critique only continues. Orange Caramel’s short video really doesn’t have much to it to keep it interesting, unless one enjoys staring at the girls’ lovely faces. The choreography is brief and simple, with Raina putting little effort into what little plot there is — the known belter can carry her tunes well but she was out of sync with the dance moves on this one. Video-wise, with paper and curtains for props, it’s evident how cheaply made the video (probably is and) looks to be. For the punchy, power-packed cutesy packed into Orange Caramel (with a look back at their past singles), the little investment thrown into this video, reminiscent of a high school project, has been a bit of a wastage, no? 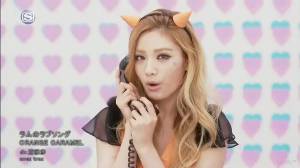 However, the consolation is where the girls still come through with an OK performance. Ultimately, the song fits with the whole concept of Orange Caramel — adorable and animated silliness. If there’s anything this appearance has managed to accomplish, it is successfully marketing the group and putting the girls in the Japanese spotlight.

To conclude, I’m going with a 2/5 for this promotional video. The effort put into producing this clip has been simply embarrassing, with insufficient depth and quality to warrant a higher score.

How did you find Orange Caramel’s “Lum no Love Song?”