With Their New Image, You Won't Forget Girl's Day

Girl’s Day is back, as a 4 member group, with their new MV, titled “Don’t Forget Me.” This is definitely a huge change from their past singles both in visual style and sound. The bright and overly aegyo group from “Twinkle Twinkle” and the crazy primary color fashion and slapstick group from “Oh My God” have both faded into the past for this sweet, pastel MV about first love. With Ji-hae gone to focus on her studies, the group now consists of Min-ah, Yu-ra, So-jin, and Hye-ri.

The idea behind the drama scenes is definitely adorable. The young students are suffering punishment and when the girl — member Hye-ri — gets tired, the guy helps her out. Then, as they are holding hands, her dreams begin to come true as he, her first love, leans in to give her a kiss, and then… she slaps him! I actually laughed out loud the first time I saw this because it seemed so out of place with the song. It is hard to tell if this moment is supposed to be funny or if we are supposed to feel sad for her because she is just too shy to let her first love kiss her. Due to the lyrics and sound of the song, it is probably the latter. At the end of the MV she passes him in the hallway and, caving into her emotions, she follows him in order to give their hand-holding and kissing a second chance. This time, she is the one that leans in for a kiss, and I’m sure I’m not the only one who expected her to get slapped, but the MV leaves us hanging on what happens in the end. Did she successfully plant a wet one on his cheek? Or was she harshly rejected just like she rejected him? Sadly, we may never know. 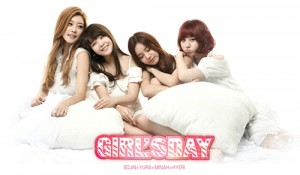 Slapping aside, this whole MV has a soft feel to it. The lighting used makes every shot seem almost fuzzy with warm light. The sets have huge windows and flowing white curtains that complement the feel of the MV without being visually overwhelming. The furniture that shows up in the set is likewise light colored and blends into the background to create some extra visual stimulation without drawing the focus away from the members. The girls compliment this by wearing pastel colors that look nice under the soft light. Clearly, they are going for a natural style overall, as the members aren’t wearing flashy makeup or jewelry and their hairstyles are also fairly simple, being either down or in low ponytails for the majority of the video. Yu-ra’s hair is the only one that doesn’t match as well with the video because it is very obviously colored red, whereas the other girls have more natural looking tones — even if they aren’t really natural.

The first outfits we see them in are unimpressive, pastel purple and pink with a silver overcoat, but they do fit the young girlish image. The second outfits are a more casual look comprised mostly of sweaters and jeans. I think this look suits the girls and the MV the best out of all the outfits they wear. The idea behind the song is a young girl writing in her dairy and the light earth tones of these comfortable sweater outfits makes them seem like they could be lounging in their bedroom at home sincerely thinking about their first love. Although, I am confused as to why So-jin gets two different sweaters, because in the first shot she is wearing a dark gray one and then when the members are on the couch together she is wearing a light tan one. 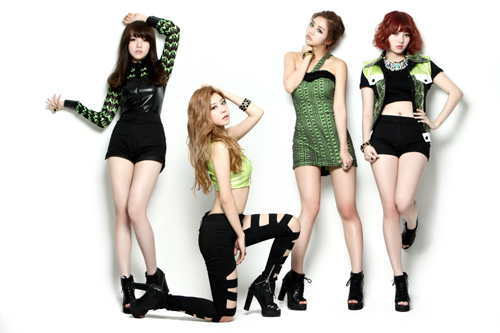 About halfway through the video they switch into darker outfits that don’t blend quite as well with the rest of the video. The darker outfits do match the colors of the school uniforms worn during the drama scenes, so in the end the colors don’t seem too out of place, but the style is totally different. On the bright side, this set of outfits is infinitely more interesting than the innocent pastel outfits, especially So-jin’s pants with the huge chunks missing. However, when the set in the background of the MV switches into an old movie studio scene with stage lights and the Broadway-style sign of the group’s name I feel like it disrupts the soft image the video had maintained up until that point. The black outfits are also far sexier than the other outfits in the MV, and sexy doesn’t match the song well. Hye-ri looks gorgeous with the curly hair and mini dress, but she doesn’t look like an innocent girl singing about her first love. For me, the contrast is unneeded and these sections could have been left out of the MV easily.

As for the dancing, well, there isn’t much to say. There is a lot of cutesy hand motioning and a good portion of hip swaying. Obviously, they weren’t going for a dance focused MV. They are wearing high heels throughout the MV, which limits them to the typical moves for girl groups, and they spend more time focusing on close-ups of the members and the story portions than establishing a clear dance routine. There is some semblance of a specific dance during the “you are my, you are my, you are my baby” portion of the chorus, but that is about it. As much as I like MVs with intricate dances, this one doesn’t really need it. The song and the story go well together and the focus is on the emotions, not being flashy with the moves. Overall, I’m not too upset about the dancing being a bunch of cute, girly moves mashed together. 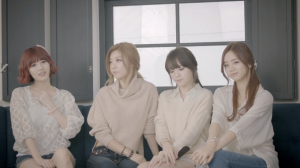 As for the song itself, Min-ah and So-jin sound incredible vocally. The style of this song allows them to show off how well their voices do in this range. There isn’t much for Yu-ra to do since rapping isn’t exactly coherent with the sound of the song and Hye-ri does her part with the back-up vocals but doesn’t have any particularly stand-out moments. I tend to enjoy ridiculous MVs with crazy songs, hence why I’ve enjoyed Girl’s Day in the past, but this song and MV have grown on me very quickly with the sweet sound and adorable story. As far as drastic image changes go, Girl’s Day has done a good thing with “Don’t Forget Me” and I look forward to seeing more promotions in this style from them. The video may not be anything innovative or particularly special, but I think it did well what it was trying to do.