A Pink's Eunji for Woman Chosun

Following her performance in Reply 1997 and preceding her next project, the Legally Blonde musical, A Pink’s Eunji has appeared in the November issue of Woman Chosun. In this issue, Eunji speaks of her past fashion choices, stating her former dislike of girly clothing. She hated pink (ironic) and preferred wearing pants. It wasn’t until she became a member of A Pink that Eunji began to branch out in fashion, wearing skirts more often and trying out different accessories. Maybe this change was part of growing up or maybe Eunji was made to transition to suit her idol image, but either way she looks adorable in this photo shoot. 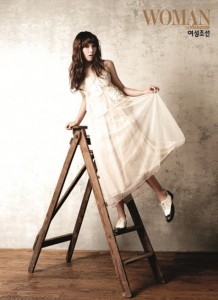 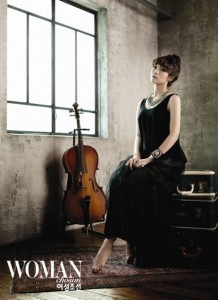 This spread displays Eunji’s cute and sexy sides. In the first photo, Eunji wears a long white dress, sheer overlay over several underskirts, and black-and-white brogues. She poses on a ladder with one foot dangling off, her hand lifting her skirt, and with a shocked expression. This photo is definitely one of Eunji’s “cute” photos. She looks young and innocent in her white dress, her loose and wavy hair adding unruliness to her appearance. She appears like a young girl caught doing something she shouldn’t. The bare background offers no distractions from Eunji. The second photo features a completely different Eunji, however. Wearing a black dress with her hair pulled into an up-do, she looks mature and sexy. In contrast to her playful image in the first photo, Eunji looks serious here. She sits with her hands and knees together, her head titled up, and her gaze directed at us. While the previous photo had her as a playful child, here she is a strong young woman. The set is also different, having more props, with the cello adding a classy look. 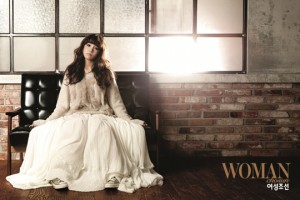 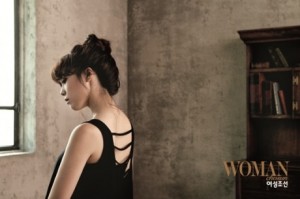 Eunji returns to youth in the next photograph. Once again wearing white, symbolic of innocence, Eunji resembles a little girl playing dress up. The skirt is huge, swallowing her in its fabric, and over it she wears a fur jacket. With these, she wears sneakers. I don’t like this outfit, but it does its job of making Eunji look younger. Her modelling also helps. Her titled head and pouty expression speaks more of a little girl. But Eunji is once again mature in the next photo. The picture is sexy, showing Eunji’s back and neck. Her expression is more thoughtful and melancholic, fitting for a young woman. 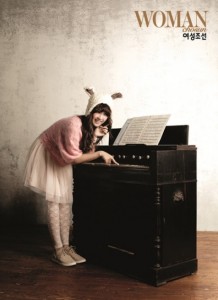 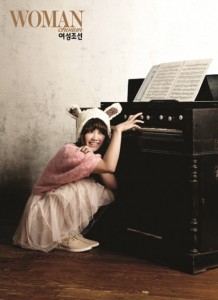 The final two shots have Eunji in the same outfit but in different positions. She again resembles a little girl in her outfit and demeanor. Her outfit is pale pink, cream, and taupe, with a tulle skirt, lacy leggings and pointelle sweater, and on her head is an adorable eared cap. Her outfit is kid-like and very feminine, possibly too young for her age but cute nonetheless. She appears to be playing with the piano and making silly expressions and laughing at the camera. Could she be playing up to her coming performance as Elle Woods? We’ll have to see.